While Bitcoin (BTC) has been grabbing all the limelight over the last 48 hours, it is time to shift the attention to the Altcoin market. At press time, the altcoin space is seeing massive investors rush as Ethereum (ETH) leads the rally with an over 10% surge at press time. In the last 48 hours, the altcoin market cap has also surged 10% moving swiftly from $141 billion to above $155 billion. Almost all of the top-ten altcoins are showing gains between 4-13% as of writing this article.

Market analysts have already been suggesting that after a massive BTC rally over the last week, the altcoins will take over the show. Probably, it will be the period of Bitcoin (BTC) cool-off followed by a major rally in altcoin space. It means that the market might repeat the showdown similar to December 2017.

This #bitcoin pump is super fun to watch, but it will be nothing compared to the insane #altcoin rally that will follow when the big boy finally takes a nap!

#Altcoin marketcap breaking out – this ought to be good. pic.twitter.com/QtSTO1nSIM

Ethereum (ETH) remains the top performer in the current altcoin market rally. The world’s second-largest cryptocurrency is giving tough competition to Bitcoin (BTC) with weekly gains above 15%. At press time, ETH is trading at a price of $442 with its market cap above $50 billion. Also, the ETH/BTC correlation (orange line in the below chart) shows that Ethereum has been moving in tandem with Bitcoin on a weekly basis. 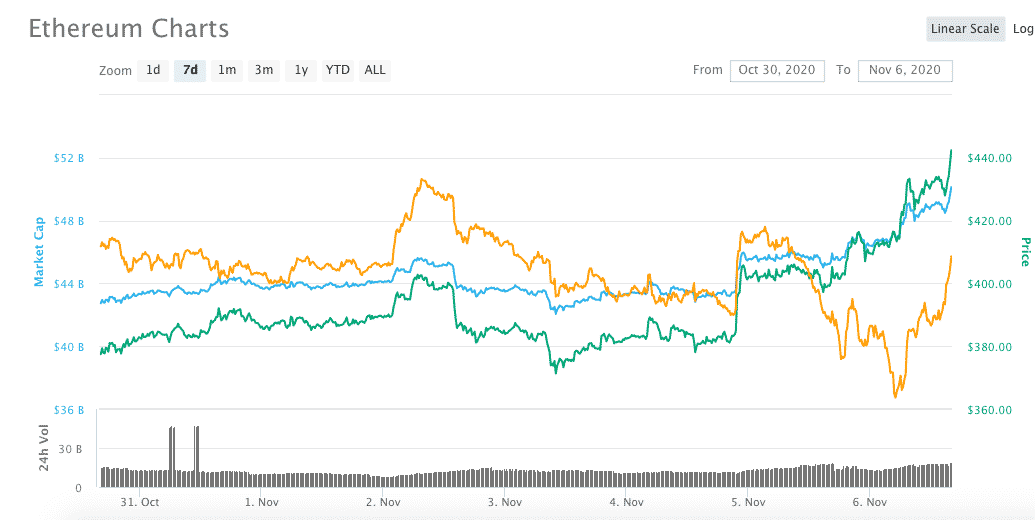 However, Ethereum has clearly outclassed Bitcoin in terms of year-to-date gains. While BTC gains have moved above 1005, the ETH YTD gains have extended above 200%.

The recent rally in ETH price also comes after chief developer Afri Schoedon recently announced the launch of Ethereum 2.0 deposit contracts. As per the current timeline, the Ethereum 2.0 Beacon Chain will go live by December 1 kicking off the smart contracts staking rewards.

Some of the technical indicators have already been hinting that Bitcoin has entered the overbought regions. Thus, there is every possibility that after a mega rally in BTC, we can see a short-term cooldown. As BTC shares an inverse relation with the altcoin market, the altcoin rally is likely to continue further.

If Bitcoin can slow down and range for a while, we could see alts catch up

But it's important to have confirmation, id rather be slightly late to buying alts than get rekt https://t.co/tzf9o00Bea