Binance Coin (BNB) continues to outperform other altcoins, leading recovery amid lethargic market action. Over the last 24 hours, the native token to Binance exchange has rallied more than 15% to trade at $277. This followed a technical breakout; however, bulls seem to have lost steam at $300.

Following the rejection from the all-time high, BNB bulls are on a mission to seek higher support. Note that the upswing followed the formation of an ascending triangle. This pattern does not have a bearish bias or bullish bias. However, it can result in either a breakout or a breakdown.

After a gigantic move in an asset’s price, a triangle pattern forms and signifies a period of consolidation. Two trendlines create the triangle where one connects a series of lower highs and links a series of higher lows.

A breakout occurs when the price lifts above the upper trendline. It is worth mentioning that the breakout usually has an exact target measured from the triangle’s highest to lowest points. Binance Coin’s technical triangle breakout eyes a 109% upswing to highs above $500. If validated, Binance will continue leading the altcoin rally. 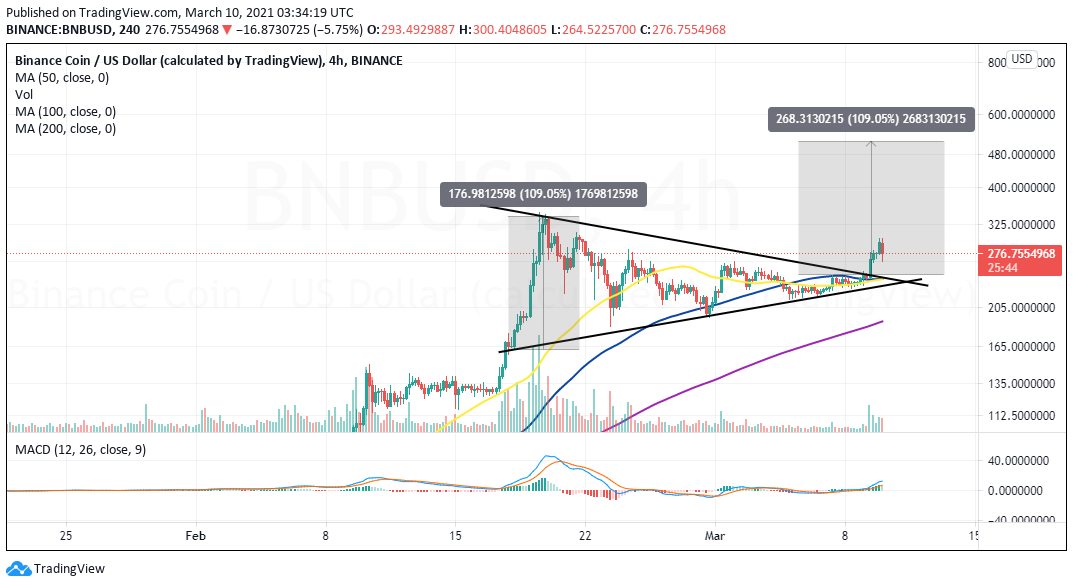 The uptrend is emphasized by the Moving Average Convergence Divergence (MACD) on the 4-hour chart.

The trend momentum indicator is moving higher in the positive region. Besides, a MACD cross above the midline confirms that the token is in the bulls’ hands.

If the breakout fails to materialize, Binance Coin may seek support before continuing the uptrend. The confluence made by the 50 Simple Moving Average and the 100 SMA is in line to provide the support, preventing BNB from hitting $205.