Bitcoin demand is in full force as the bitcoin futures volume on CME rises significantly, registering more than Cboe’s and bitcoin spot trading on Coinbase despite BTC being 68% lower than its peak. Moreover, eToro also showcasing an increase in bitcoin holdings clients.

Bitcoin has lost about 68 percent of its value since December when it hit its peak at $19,500. However, this isn’t affecting the enthusiasm of the bitcoin investors at all as instead of a downward movement, it has taken an upward lift.

To begin with, CME has beaten its fellow Chicago exchange operator Cboe Global markets in bitcoin derivatives volume. In July, the bitcoin futures volume of CME doubled and further continued its ascend. Despite a drop in the world’s leading cryptocurrency, the volume keeps on increasing.

This volume has exceeded even that of spot bitcoin volume traded on one of the leading US Crypto exchange, Coinbase. Reported by Financial Times, for this month, the daily future volumes have averaged 5,000 bitcoin equivalent on Cboe to 30,000 of CME. Whereas Coinbase volume has averaged about 11,000 bitcoin as you can see below in the chart that first appeared in Bloomberg. 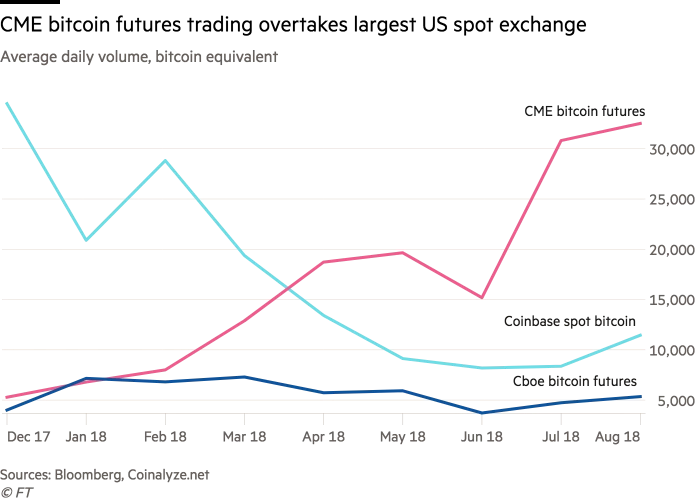 However, the surge in volume didn’t happen at Cboe that launched its bitcoin derivatives in December, just one week before CME did. The competition is only going to get grievous as now the world’s largest exchange group, NASDAQ’s owner will be launching bitcoin contracts in November. This has put pressure on both the exchanges to gain traction.

As a result, this month Cboe has increased the limit of the number of contracts that one trader can hold about five times in order to match up CME. In one of its recent regulatory filing, the company shared that this will provide a level playing field between both the exchanges and promote competition while “enabling market participants to trade between the two products”.

Bitcoin clients increasing their holdings on eToro as well

However, CME is not the only one where bitcoin volume is rising despite bitcoin price plunging. Mati Greenspan, the senior analyst at eToro shared a Tweet that shows the bitcoin holders are in fact increasing.

This chart is sensational…

Despite falling prices this year, clients @etoro are increasing not decreasing their $BTC holdings. pic.twitter.com/kvYKo1PBiD

And this is even better as eToro doesn’t offer bitcoin derivatives as asked by the Twitter user, “But I always thought Etoro is a CFD platform, What kind of BTC do people hold there Sir?”

To which, Greenspan replied,

“We switched to real assets several months ago. That goes for stocks and crypto. We act as a custodian and hold on behalf of the client.”

He further cleared with a simple “Nope” as another one asked, “Aren’t those just derivatives they are buying?”

He further commented on,

“Demand is growing. Some might argue that it’s more healthy that the demand is dispersed among more people.”