Continuous heavy rainfall swept most parts of China this week, affecting thousands of people and causing heavy economic losses, according to the Ministry of Water Resources. But according to Chinese local blockchain and crypto information platform Golden Finance, the industry that has suffered huge damages among others is the crypto mining industry which finds a strong foothold in Sichuan.

Last week, over Wednesday and Thursday, heavy rain hit Anhui, Jiangsu, Sichuan, Shandong and Jilin provinces according to the State Flood Control and Drought Relief Headquarters said. According to the National Meteorological Centre, heavy rainfall will hit areas including Hubei, Sichuan and Jiangsu provinces over the coming week, and some areas will also see thunderstorms. Due to this bad weather and thunderstorm Flooding occurred in 31 rivers in Yunnan, Sichuan, Gansu, Shaanxi and Shandong provinces and the Guangxi Zhuang autonomous region. The National Meteorological Center has also issued a yellow alert for rainstorms, as heavy precipitation was expected to sweep most parts of the country.

In Sichuan specifically, rainstorms have battered 15 cities and prefectures since Saturday, forcing the relocation of more than 8,800 people.

Most Bitcoin mining operations are in China. As of late 2017, it is estimated that almost 70 percent of all Bitcoin mining is located in China. In China, specifically Sichuan, a province of China, has been termed as a global Bitcoin mining capital. According to major local publications, including the China Money Network, more than 20 mining companies and 10,000 Bitcoin miners are located within Sichuan’s Mabian Yi Autonomous County, a cold and mountainous region with just over 215,000 residents and Kangding, a region within Sichuan well known for its natural beauty.

Sichuan provided all facilities that a crypto mining company needed. The region had a downward moving graph of electricity costs and is fairly remote with a limited number of residents having far fewer noise complaints. With a cold climate, very cheap electricity and low population density, Sichuan have transformed itself into global Bitcoin mining hubs.

Due to the collapse of mountains, flooding of rivers and thunderstorms the local life in Sichuan has come to a standstill. The local hydropower and communication facilities are also damaged. This cruel weather has not even spared the crypto miners and tens of thousands of mining machines were also drowned. This resulted not just in the operational loss but also capital loss.

At present, there is no specific data on the losses at Sichuan mines. However, from the photographs published in ​​the affected areas, at least tens of thousands of mining machines have been flooded and lie as junk almost impossible to repair. 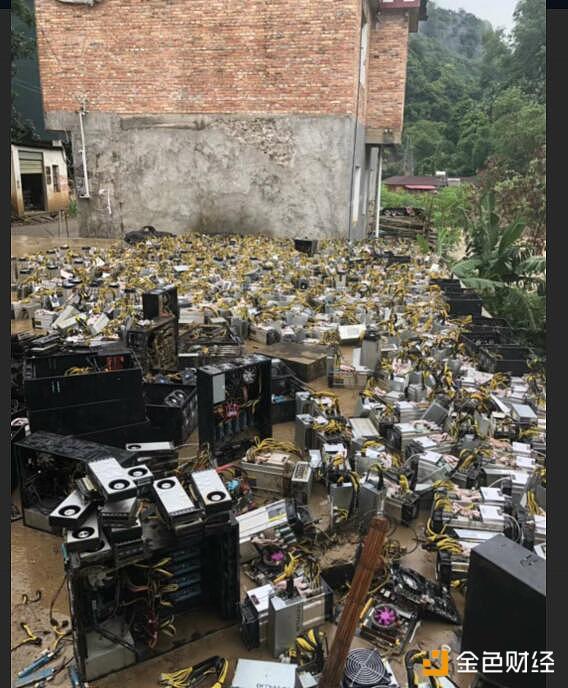 The actual loss, whether operational or capital would be determined once the situation improves in the region. But definitely, the pictures don’t look great as the losses look substantial. Reviving the mining industry here would be tough.

Will Sichuan rise again as the crypto mining capital of the world? Do let us know your views on the same.