Bitcoin has gone above $6,200 after days of bulls tramping. While BTC enjoyed the flecks of greens, DASH, EOS, and NEO registered gains of about 4 to 7 percent and came out at the top among the top 20 cryptocurrencies. 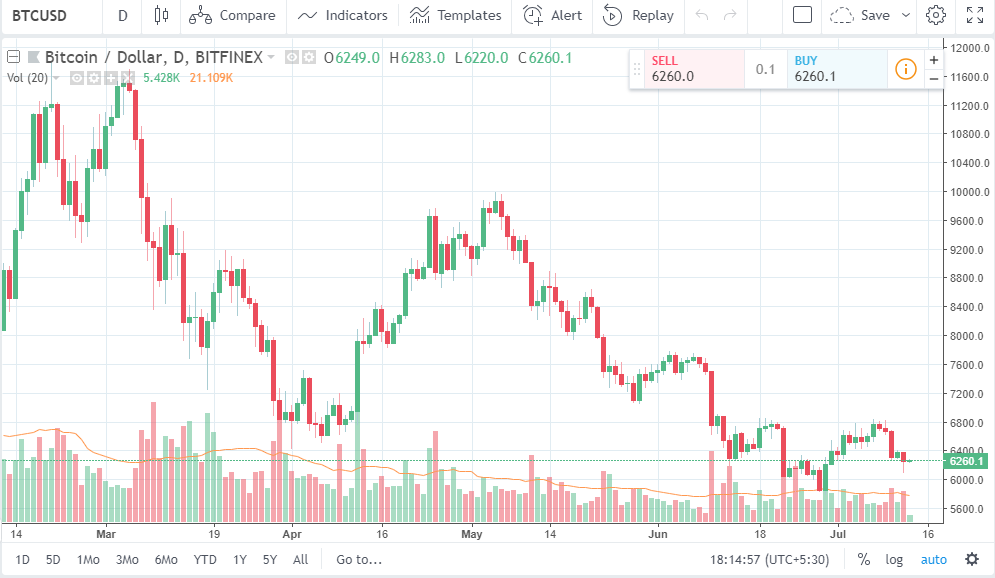 Though there has been no clear reason for the same, a number of factors played a part here. Just before this Bitcoin price drop, the Indian central bank RBI”s ban on cryptocurrencies went into motion and around that time only the Bancor wallet lost about millions of users’ funds.

However, the bears seem to take a retreat as Bitcoin (BTC) climbs to $6,260. The gains might be in small percentage but Bitcoin is surely feeling the greens. And having made a comeback from the precipice of $6k, it is a good sign after days of gloomy clouds.

However, what remains to be seen is if the world’s Numero Uno cryptocurrency Bitcoin will be able to sustain this level.

In the meantime, among the top 20 cryptocurrencies, the highest gainers are DASH, EOS, and NEO.

The world’s 14th largest cryptocurrency DASH is enjoying the gains of over 7 percent at $225.92. With a market cap of $1.85 billion, DASH manages the daily trading volume of $258 million.

In the past few bearish days, DASH went down to $208. The latest developments such as Alt36 ecosystem of dispensaries, suppliers, and customers will be connecting directly to the Dash network and the potential of a decentralized investment fund has been feeding the investors’ attention towards this cryptocurrency.

NEO garnered hype by sharing its future plans for the cryptocurrency while giving a teaser of NEON Wallet V2 through fixes and updates. At 12th rank, NEO holds a market cap of over $2.17 billion.

One of the most hyped cryptocurrencies, EOS took a heavy beating during the bearish scene as it went from $9.13 to $6.71. However, it seems to gain the upward momentum by reaching $7.18 with a gain of about 6.07 percent in the past 24 hours.

The 5th largest cryptocurrency with a market cap of $6.4 billion has been having a rough time since its controversial mainnet launch and recent RAM price spikes but seems to get back in action.

Majority of the cryptocurrency market is experiencing the gains right now. It is expected that the correction is over for now and the bulls will take charge, though for how long is the real question.

✓ Share:
Disclaimer
The presented content may include the personal opinion of the author and is subject to market condition. Do your market research before investing in cryptocurrencies. The author or the publication does not hold any responsibility for your personal financial loss.
About Author
Partyush Goyal
A computer science engineer, I have been adamantly following the blockchain and cryptocurrency industry for the past 2 years. A crypto enthusiast and hardcore blockchain follower. Reach out to him at [email protected]
Facebook Instagram Twitter LinkedIn

Wealthfront ($21 Billion AUM) Offers Cryptocurrency Exposure to its Clients Through Grayscale
Wealthfront, a financial institution based in California, has announced an expansion of its digital asset investment menu on…

Peter Schiff calls MicroStrategy’s Saylor “mad” for trying to Pump Bitcoin
Peter Schiff, the CEO of Euro Pacific Capital and a known gold enthusiast has taken to Twitter against…