Jiang Zhuoer, the operator of one of the leading Chinese mining pools Lebit Mining in a recent statement said that his firm would no longer avail joint mining service to Chinese investors amid a growing crackdown on Bitcoin mining by the authorities. The operator also revealed that they are planning to move to North America. He said,

Mining in China may change from large to family miners, even if it causes 50% of the mining machines to fail to operate, there is no problem for the Bitcoin system. But the top mining pools may become European and American mining pools. 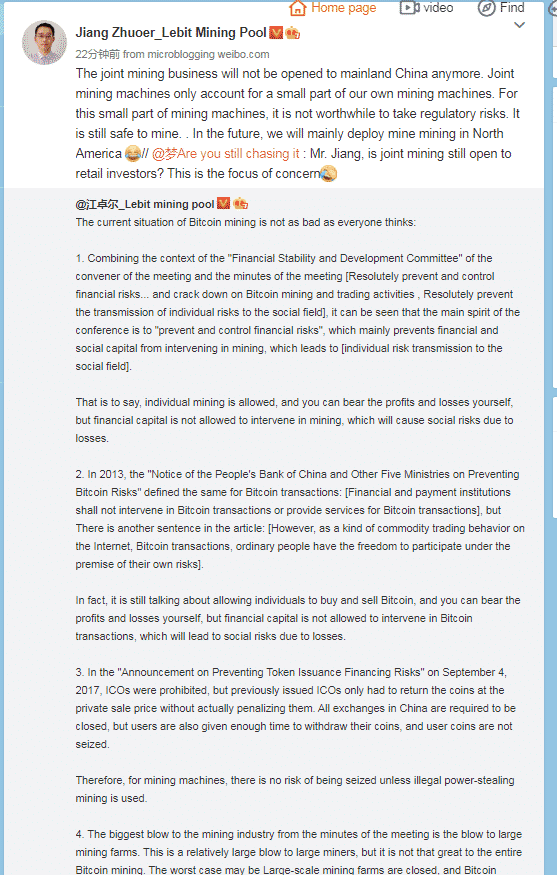 The Chinese authorities have started a crackdown on Bitcoin and crypto mining activities in the country to fulfill the zero-carbon pledge taken by the central government. Amid growing scrutiny from the government, big Chinese mining pools are planning to locate overseas despite the cost of setting up is nearly 10X than China. The fact that the mining industry is not regulated, makes it way cheaper to operate in rural provinces.

Why China is the Epic Center of Crypto Mining?

China is home to some of the largest hydro powerplants and solar energy projects which offer clean energy supply at dirt cheap price, thus even though Bitcoin and crypto trading is largely restricted, mining is still highly popular because of which a majority of hash power of Bitcoin network comes from China. The government crackdowns from time to time are nothing new either but the carbon neutrality plays a big part in policies of the state and Bitcoin mining in certain provinces have led to state failing to meet their carbon emission goals.

While the Chinese crackdown on Bitcoin and Bitcoin mining is not new, it seems the government is taking a stricter approach this time around and top Chinese mining pool operators believe large scale mining would no longer be operational in the country and only small miners would be to run their operations from within the home.

The crackdown by Chinese authorities on large-scale miners is seen as bullish news by many Bitcoin proponents as it would lead to more decentralization in the Bitcoin mining hash rate.

A crackdown on miners in China would radically reduce the carbon footprint of Bitcoin mining, increase the profitability of all the remaining #Bitcoin miners, reduce nagging China FUD, support progress toward our ESG goals, & drive up the value of $BTC. We should be so lucky… https://t.co/78ELDF9sku