Coinbase ads can be now seen on Google, Facebook, and Instagram. The industry giants with billions of monthly users have given a legitimacy to the cryptos and a competitive edge to Coinbase over its competitors. Investors are excited about this, believing it to be a good news for the crypto market and drive Bitcoin price higher.

In mid-May, the news of Google and social media giants Facebook and Instagram announced that cryptocurrency and Initial Coin Offering (ICO) ads will be banned from the following month. Just last month, the directive went into effect and in less than 2 months, the ads are now restored.

A few days back, Brian Armstrong, the CEO of Coinbase tweeted,

“Facebook banned ads for crypto earlier this year. Proud to say we’ve now been whitelisted and are back introducing more people to an open financial system.”

Facebook has decided to allow specific cryptocurrency related ads to be shown after it reviewed its policies. The first green signal has been given to the San Francisco-based Coinbase.

Soon after, a Redditor shared a screenshot of Coinbase ad on Instagram. 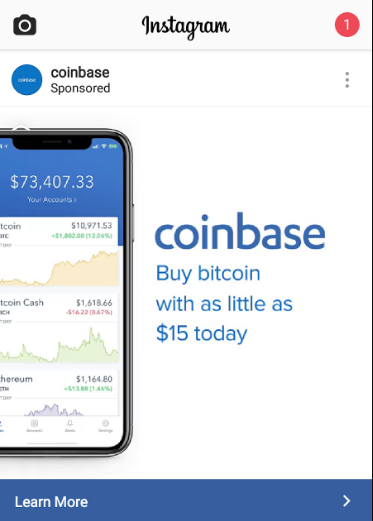 Though there has been no confirmation on Google allowing the cryptocurrency related ads, Coinbase ads are now live on Google as well. 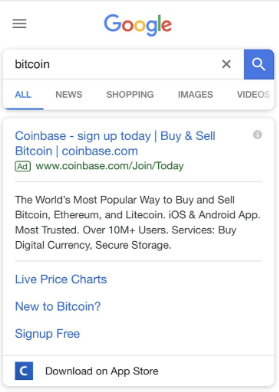 This is a huge move and a big news for Coinbase as it gives a significant edge to the US exchange over its competitors.

If we take a look at the user base of these giants, Facebook has about 2 billion monthly users and Instagram manages close to 1 billion users per month. Google is the top search engine in the world with a margin of 66 percent to that of Bing, which is in the second position.

Such a number represents an incredible opportunity and potential to expand its user base, especially at a time when Coinbase is already working on expanding its business.

Just recently, Coinbase announced that they are looking into adding more coins. Moreover, the constant developments in the form of Coinbase Pro, Coinbase Custody and Coinbase Index Fund will now reach a much wider audience.

The decision of Google and Facebook to allow the cryptocurrency ads even though to a selected few will give the cryptocurrencies a legitimacy. This will further boost investor’s confidence and trust especially of those who are new to this world.

Crypto enthusiasts are happy with the decision made by industry giants and believe it is good for bitcoin and the overall crypto community. They even expect it to give a boost to the bitcoin price and hit the $8k level. At the time of writing, Bitcoin (BTC) is at $7,661 with a rise of 3.52 percent in the last 24-hours while the entire crypto market is registering greens and a good day as well.