Earlier in the day, Coinbase pro reported issues with trading on the BTC-USD order book. Though the team resolved the issue within an hour and updated the status back to ‘live trading mode’,  it resulted in customers raising suspicions over the possible causes. “Proof of key”, an upcoming event to be held on January, 3rd 2019 was one among the key topics of discussion.

The news broke out when Coinbase pro officially announced an investigation status for the BTC-USD order book on December 25, 2018, 6.35 IST. As soon as the news was officially announced on social media, many crypto enthusiasts shared their concerns about the safety of their funds deposited with the exchange.

[status] Investigating: We are currently investigating issues with trading on the BTC-USD order book. https://t.co/xIjStLRlCw

Though the matter was resolved by the coinbase team in just an hour but with current ongoing negative sentiments in crypto space due to the bear market, soon coinbase pro twitter account was flooded with suspicions.

One such crypto enthusiast expressed his opinion by citing the ongoing staff redundancies as a cause for this event and asked coinbase whether people are still allowed to withdraw their funds.

What’s happening with @coinbase? Are people not being allowed to withdraw funds and there are wrong fund amounts? Does this relate to staff redundancies due to revenue issues? Should people be getting their money OUT while they still have time?

Some customers even feared that this might be a safety measure taken by Coinbase Pro team against the upcoming “Proof of key” celebration on January 3rd, 2019 led by crypto enthusiast Trace Mayer.

On January 3rd, 2019 Trace Mayer has urged the cryptocurrency community to celebrate it as “proof of key” by withdrawing their crypto-assets from third-party crypto services that currently store user funds to prove solvency.

Lol just in time for 3rd of Jan movement!

Not the First time, Coinbase halted trading for BTC-USD in August 2018

Furthermore, it’s not the first time for Coinbase pro experiencing the issue, it has also reported the unavailability of BTC-USD trading in early August 2018. 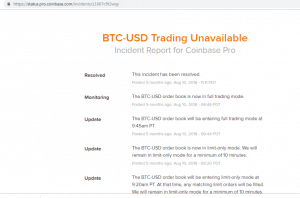 At this time, many users of the Coinbase pro complained about their issues on canceling their purchase orders.

[status] Investigating: We are currently investigating issues with trading on the BTC-USD order book. https://t.co/EOfg1Mt7lM

The order book at Coinbase pro is the current orders on the exchange platforms through which customers maintain their orders for particular crypto with respective pairs. Using the Coinbase Pro order book, its customers can analyze the value of cryptocurrency at which it has been bought or sold at real-time.

Though currently the success of January 3rd, 2019 is highly debatable such abrupt events at cryptocurrency exchanges will definitely fuel the suspicions.

What do you think about “Proof of key ” event? Is it really worth it, let us know in your comments below.

Share on Facebook
Share on Twitter
Share on Linkedin
Share on Telegram
Post your comment...
Sunil Sharma 157 Articles
Sunil is a serial entrepreneur and has been working in blockchain and cryptocurrency space for 2 years now. Previously he co-founded Govt. of India supported startup InThinks and is currently Chief Editor at Coingape and CEO at SquadX, a fintech startup. He has published more than 100 articles on cryptocurrency and blockchain and has assisted a number of ICO's in their success. He has co-designed blockchain development industrial training and has hosted many interviews in past. Follow him on Twitter at @sharmasunil8114 and reach out to him at sunil (at) coingape.com
Follow Sunil @
Facebook Twitter LinkedIn
Our premium partners