Much to the respite to invests now, Coinsecure informed its customers via email that the company has started the process of compensating its customers in Indian Rupees, ex gratia, for the loss of their Bitcoins in the attack that occurred on April 9, 2018.

Coinsecure is one of the few exchanges that has taken the onus to redeem the loss to its customers. According to the procedure mentioned in the email, users, who were affected by the attack, will be required to sign an agreement releasing Coinsecure of any future liability and provide certain other documents in order to receive the payment. The Agreement has been uploaded on the Coinsecure website and can be downloaded from there. This agreement will have to be duly signed and delivered to Coinsecure’s office along with the documents mentioned in the Agreement before June 30, 2018. The documents include 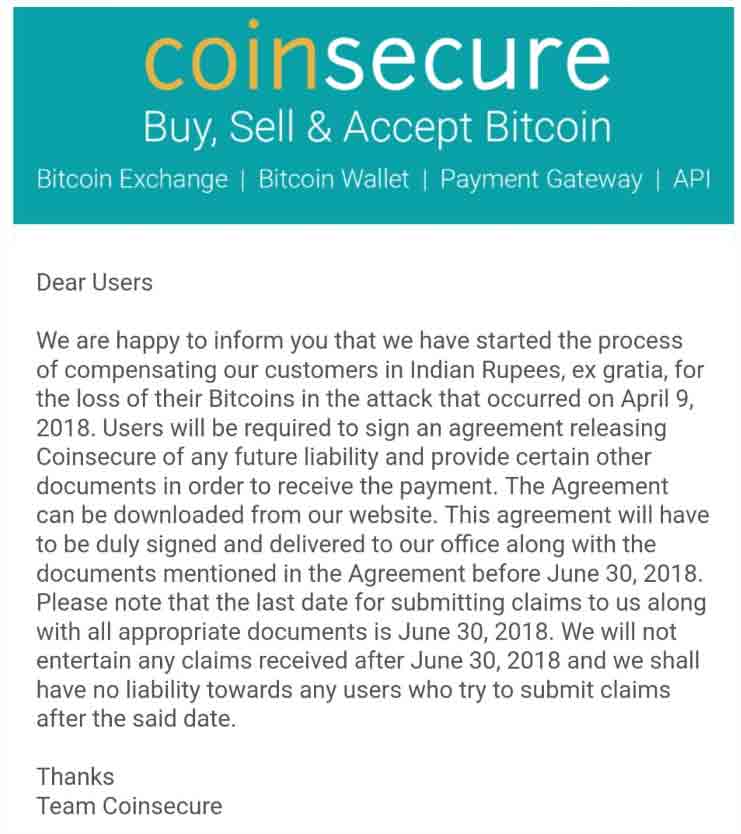 Other clauses of the agreement

The “Settlement and Release Agreement” issued by Coinsecure has some major clauses. The first clause speaks about Release of Coinsecure, which states the Coinsecure will not be liable of  claims, damages (including punitive damages), demands, debts, actions, attorneys’ fees, costs of suit, and liabilities of every kind or nature and by signing this agreement the customer will acknowledge Coinsecure’s  unconditional release and will not rely upon any oral or written representations or warranties from anyone. The customer will also refrain from commencing any legal proceedings against Coinsecure post this settlement.

The second clause speaks about the compensation. According to the agreement, the customer will be compensated its entire account balance held with Coinsecure as on April 9, 2018, in Indian Rupees. The exchange rate for conversion into Indian Rupees shall be the exchange rate prevailing on April 9, 2018, i.e. 1 BTC = Rs. 4,37,000/­ (Rupees Four Lakhs Thirty-Seven Thousand Only).

An important clause put forward by Coinsecure in the agreement is that it will be free to share the above details with any governmental authorities, including the Income Tax Department or any other enforcement authorities as the case may be. The jurisdiction of the agreement in New Delhi.

Although it is a happy note for the customer that it is receiving its monies back. The last trending price of Bitcoin on Koinex, another Indian exchange while writing this article( on June 26 at 11:36) was INR 420000- still a profit of INR 17000, if assumed the investor would have kept his investment in bitcoin intact to date.

This payment is a brave step by Coinsecure to keep the faith of investors into the budding crypto industry in the country.

Will the other exchanges learn from the mistakes Coinsecure made to prevent themselves from a similar attack or theft as you may call it? Do let us know your views on the same

BTC Hashrate Drops to Lowest in 2021, North America All Set to Become New Crypto Mining Hub
China’s crackdown on crypto does not seem to end. In…