Tokyo Olympics 2020 officially started on 23rd July amid Covid restrictions and after year-long delays. The key event began with a dazzling opening ceremony with 206 participating nations joining the celebrations with a parade of athletes.

A South Korean broadcaster used an image to represent each country and for El Salvador, they used Bitcoin’s image. The broadcaster’s use of Bitcoin to represent El Salvador signified that the Latin American nation is recognized as a Bitcoin state world over. 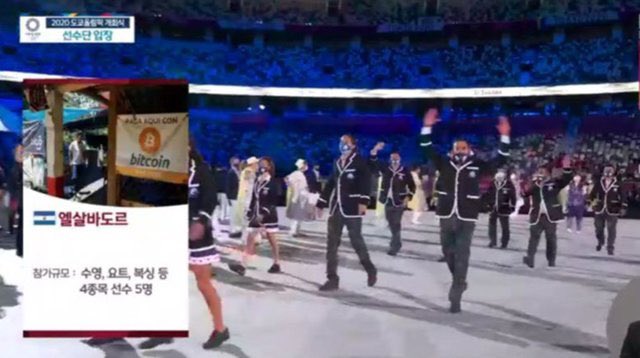 The small Central American nation created history in June this year after it passed a bill to make Bitcoin a legal tender. El Salvador became the first nation in the world to make Bitcoin a legal tender in hopes of banking the unbanked, as 70% of its population don’t have access to banking facilities. The country is currently working on technical implementation and building infrastructure to incorporate Bitcoin’s use.

El Salvador President Nayib Bukele has been at the forefront of Bitcoin adoption who has launched the national Bitcoin wallet program and also airdropped $30 worth of BTC for every adult citizen to promote its use. The president is also in talks with the country’s geothermal plants running on volcanic energy to make way for clean Bitcoin mining. However, despite Bukele’s efforts towards building the first Bitcoin state, the bill has faced a lot of backlashes. A significant section of the country’s population beleive Bitcoin’s volatility could prove to be a bane for people living on minimum wage.

First, IMF and then JP Morgan also sounded a warning against the use of Bitcoin as a legal tender. A significant section of the Salvadoran population is also reportedly unhappy with the new Bitcoin law. Just a couple of days back a small group consisting of leftist unions, student associations, and a few others protested outside the country’s parliament.  A recent study conducted by the UGF group indicated 77% of the Salvadoran population are unhappy with the new Bitcoin law.

advertisement
Ravendex: The Next Gen-Dex & Launchpad On Cardano Powered By $Rave Token - Buy now !
✓ Share:
An engineering graduate, Prashant focuses on UK and Indian markets. As a crypto-journalist, his interests lie in blockchain technology adoption across emerging economies.