After signing an MOU with Korea Customs Service, ICON coin is now collaborating with the world’s biggest accounting firm, Deloitte to seek out potential blockchain startups. Just days before, it also launched the Android version of ICONex. However, ICX price is currently in red which is moving in tandem with other cryptocurrencies.

ICON coin seems to ramp up its game as well as just recently it signed an MOU with the Korea Customs Services along with eight other organizations. Now, in addition, the good news for the ICO community comes with another big name.

Already, names like Samsung, Pantera Capital, and others are attached to this South Korean venture. Now, one of the world’s largest accounting firm has come into partnership with the company.

Today, in its official blog, ICON announced that: “We expect to expand our blockchain network and activities with the collaboration of Deloitte’s global network and partners.”

This collaboration between both the firm is expected to drive their individual values in the market as mentioned,

“Collaboration between Deloitte Blockchain Lab, which has developed and commercialized more than 30 blockchain projects, and ICON’s technology is expected to strengthen both companies’ competitiveness in the blockchain industry.”

“Collaboration between leading companies in the blockchain business is essential. By working with ICON we look forward to creating best practices for applying blockchain technology in the real world and expand our strength in the blockchain industry.”

ICON developments on rising, ICX price had a mixed week

With this agreement, the Deloitte Startup Advisory Group will be providing its professional services “for the commercialization of blockchain based projects through accounting/financial consulting, tax advisory, risk consulting, investment sourcing and overseas advancement support.”

Furthermore, both the companies will continue to look for blockchain startups that hold potential and are promising.

A few days back, ICON coin also released the mobile version of the ICONex for Android that allows one to store and manage their ICX and ETH.

As for its iOS version, the official announcement mentioned,

“We apologize to those using iOS, as it will take some more time for the mobile version of ICONex for iOS to be launched.”

the date for the same hasn’t been finalized yet while the team is working on speeding up the process.

Currently, at 23rd position, ICON is in the red with a 24-hour loss of about 2.74 percent. At the time of writing, ICX price has been at $2.60 while registering loss against BTC and ETH as well. 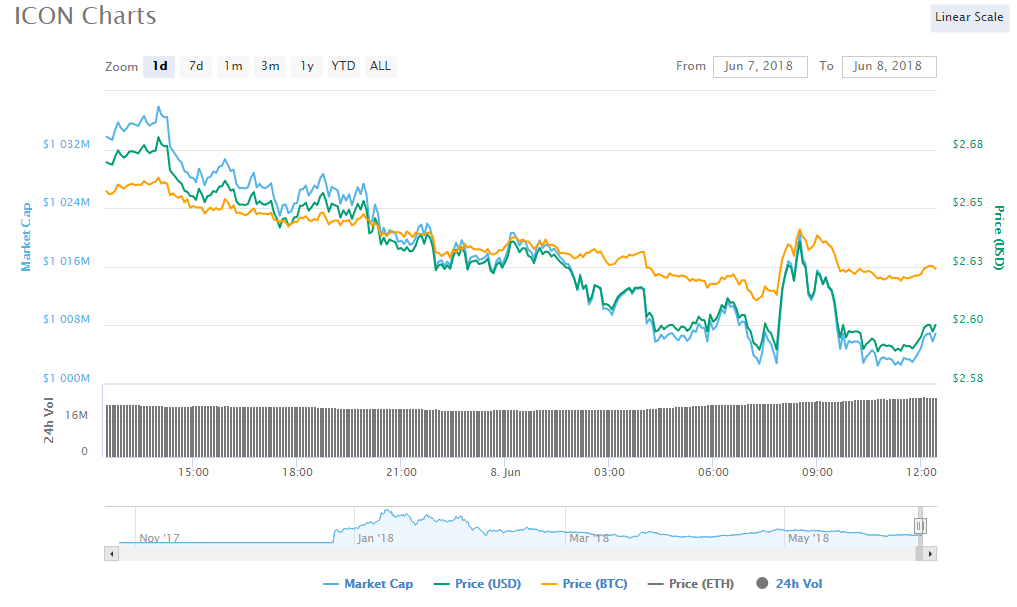 Given the fact that the market went red in the morning, ICX price took the expected dip from $2.64 at the beginning of the day.

This entire week, the crypto market went through a lot of ups and downs. And ICX moved in tandem with other cryptocurrencies.

What do you think of ICON’s new collaboration? Share your thoughts with us!

Anjali Tyagi
440 Articles
Having a background in writing, I worked on a wide array of industry topics and have recently entered the world of Blockchain and Cryptocurrency.