One of the reasons IEO are catching up over ICO’s because they are more secure being attached to exchange and its launchpad platform. Investors like IEO’s because there is an assurance that the platform/exchange had done the necessary due diligence of the projects it lists and chances of losing money through scams or untrue information is minimal.

As IEO’s gather steam, it becomes critical to understand which IEO platform or launchpad are actually good providing the best of services to both investors and projects.

To be able to be termed as the best platforms designed for launching IEO, the IEO platforms need to have certain features in order to offer the best investment results and opportunities.

While investors and projects would look at some common points like the platforms should have an easy to use dashboard where everything you need is in one place and maybe some bit of expert advice on each IEO it launches, there will always be some specific points which need to be considered.

Selecting the right IEO launching platform gives the project the best opportunity to attract investors to your project. While most claim to have the right set of investors, the best of the IEO platforms distinct themselves on the basis of –

Binance Launchpad is the exclusive launch platform for the Binance exchange. The launchpad is the most popular as it is backed by one of the leading crypto exchanges, Binance. Binance Launchpad boasts of its leading superior technology and partnerships which brings in more investors resulting in higher liquidity. According to the website, Binance’s certified matching engine is capable of processing 1,400,000 orders per second, making Binance one of the fastest exchanges in the market today.

It also mentions that the exchange has solid relationships with industry leaders, and has an enviable list of investors and advisors who are willing to stand behind its platform. The launchpad is an important project for the Binance and is lead by CZ who heads a team which has experience in both wall-street and crypto finance. This team also has huge experience in setting up successful startups.

The platform supports all devices and multiple languages, offering a seamless user experience.

OKEx, being one of the leading exchanges by trade volume, to chose to follow Binance and Huobi and launched its IEO exchange. Branded as OK Jumpstart, OKEx’s platform plans to provide a platform to help quality blockchain projects go public and get listed in a liquid and world-class market, and at the same time, help fuel the growth of the blockchain market and ecosystem healthily.

To provide uniqueness to its platform, OK Jumpstart uses a subscription + allotment approach. Under this approach, the subscription opens for 30 minutes and it will close early if the oversubscription limit is reached. Once the subscription is over, allotment then follows. To participate OKEx has laid some ground rules which are as follows –

Seeing the rise in IEO’s and competitor Binance moving ahead, Huobi also launched and IEO platform in March 2019 called Huobi Prime. With this platform, Huobi has plans to provide great crypto projects a chance to raise capital with some qualified and genuine investors.

Huobi also positions its launchpad as a Direct Premium Offering (DPO) platform that provides the users with a variety of advantages. All coins purchased through Huobi Prime are immediately deposited into user’s accounts and are tradable on Huobi Global against Huobi Token (HT), our native token. No need to wait for presales or similar delays. The exchange does a rigorous screening and has a stringent process to ensure only premium projects that have yet to be listed on any major exchange are included. The platform also gives equal access opportunities big and small players by opening doors to personal users, not just professionals or VIPs.

The long-established and popular exchange, Bittrex, announced their first IEO in February 2019. But it to didn’t have an easy opening to its IEO debit as the first and so far only IEO — for RAID project — was canceled. Nevertheless, Bittrex has an enviable user and investor base and is expected to pursue another IEO in the near future.

KuCoin is a former Top 10 exchange but remains one of the best-known exchanges worldwide. With having lost their position due to the decreased trading volume of late the exchange looks to be heading the IEO way to get its fortunes back. Recently they announced their first IEO for the MultiVac project on their brand new platform, called Spotlight. KuCoin Spotlight aims to assist blockchain projects in raising the needed funds, attracting market attention and improving industrial influence.

Probit has seen solid success on its rapidly expanding IEO platform. It has already hosted over 70 rounds of IEO after carrying out its first IEO on in February 2019. Probit has shown some amazing results like the Linix IEO that sold out in just five seconds and went on to raise $300,000 in 30 minutes and the latest massive success in Boltt Coin, which raised $795,000 over the course of 4 consecutively sold-out rounds.

Their very first Launchpad Premium IEO for SportX helped the decentralized sports IP ecosystem sell out all 5,000,000 of their SOX tokens while also helping its value skyrocket by 300%

Coinbene is often listed among the Top 10 exchanges and has a big community so its presence in the IEO market with its launchpad was obviously expected. Although the exchange has been in the news of speaking about launching its own IEO platform in 2018, its first IEO was officially announced in March 2019. Coinbene has already had its jitters and jolts when RedFOX Labs, a Vietnam-based blockchain Venture Builder, had replaced Coinbene with Coineal to run an IEO. RedFOX announced the revocation after several crypto news portals reported suspicious activities associated with CoinBene, including delay in processing withdrawals and deposits.

Unlike Probit, Coineal is quite a big exchange with almost $700M daily trading volume. Have And like other bigger exchanges, they too have jumped in the race for and IEO launchpad. Having a stronghold in the southeast Asian markets with investors in China, Japan, Korea, Vietnam and more, Coinreal has already completed IEO’s for IPW Token, Levolution, and Kizuna Global Token.

ExMarkets platform is one of the late entrants in the race but has raced fairly ahead. The exchange terms itself as because of its superior technology that helps its providing thick order books and deep liquidity thanks to a backend framework. The platform lists 5 IEO’s as completed and shows 6 IEO as ongoing with 3 more upcoming. Even though the exchange does not disclose the result of each IEO, the number of projects listed here speaks the story of its success.

Another big exchange and another of its side project that focuses on IEO. Just like the success of its exchange ZB.com, which was a newcomer in 2018 but quickly reached the Top 10 on CoinMarketCap, ZB expects its launchpad to do the same. Although they have been accused of faking their trade volumes, nevertheless, ZBG has completed two IEOs on their own launchpad with V Systems and Kamari projects.

Just like its strategic partner of ZB.com exchange, BW.com is also an exchange has boasted of its strong footing in the Asian region. BW Tokens Launchpad has supported three IEO projects to date, with two of them completed at the end of March 2019 (Blockbuster and V Systems) and one still ongoing (Grabity).

A fairly unheard name, BGOGO is the first digital asset exchange with supernode listing authority. Bgogo.com is registered in the Cayman Islands and its founders include members from leading Internet companies such as Facebook, Twitter, IBM, Alibaba, etc. The core engineering team consists of several world champions of the ACM International Collegiate Programming Contest giving all the potential to the exchange to succeed as an IEO token platform. The platform already has announced two token sale events for ARM and X-Block projects.

IDAX is a global digital financial service platform focusing on the needs of bitcoin traders with high daily trading volumes. With already established investors base, IDAX’s entry into IEO markets was marked when the platform announced first IEO for ZeroBank project, which will take place in April 2019.

A relatively new exchange but a strong derivate platform that has access to fairly large high ticket investors. Their first IEO project called DOS Network hasn’t done much to excite the community, and already there’s a sense that these projects may struggle to sustain their price once exchange listed. It’s early days for Bitmax Launchpad though, which may yet produce some winners.

You might also be interested in: Bittrex Hosting First Initial Exchange Offering (IEO), Is It Similar to Binance Launchpad?

LATOKEN shot to fame when it announced that it would be trading tokenized shares of Apple, Tesla, Google, and other blue chips, as well as gold, oil and real estate ETFs via crypto. Giving an opportunity crypto-holders to diversify their portfolio by getting access to tokens linked to the price of real assets, the exchange too is pushing its IEO platform. Having launched its IEO launchpad a long time ago back in 2018, the promotional activity for its IEO platform has just been on the rise in 2019.

IEO’s are expected to stay here for a while and looks like it can change fortunes for most of these exchanges which not only provide subscription assistance but also help in providing best projects for token sale ultimately cleaning the blockchain and crypto ecosystem from scamsters and fake projects. 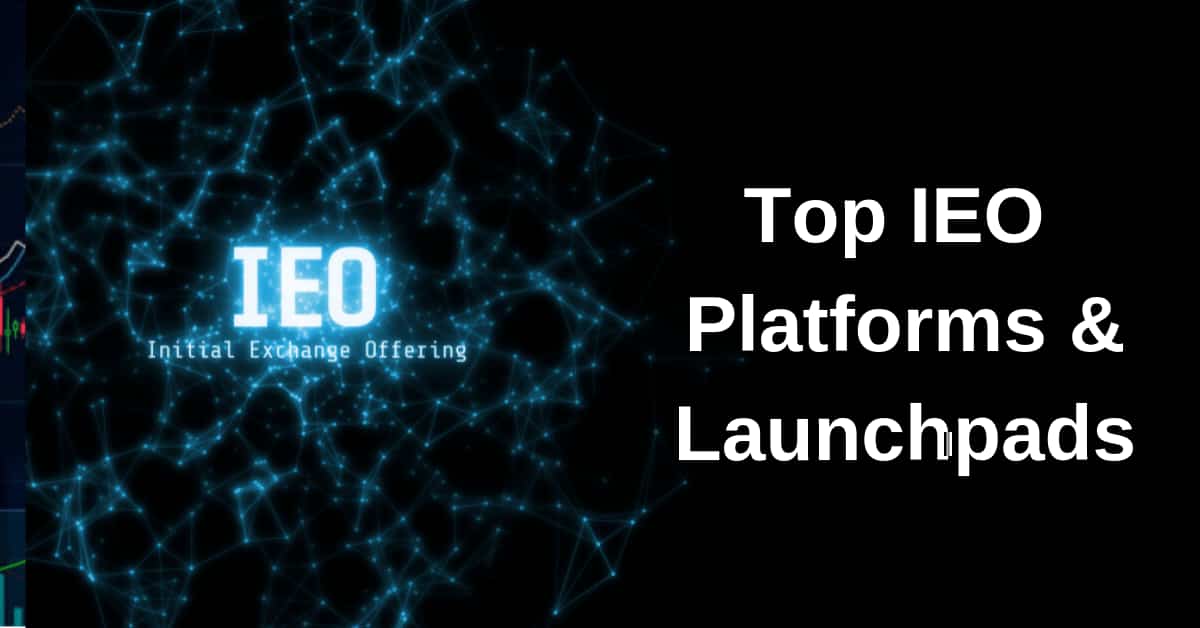