IOTA is registering double-digit gains of over 16 percent that has it on the 9th position again. Leading the top 10 cryptocurrencies with highest gains, IOTA released the beta version of its much-awaited Trinity Mobile Wallet app which is fully-featured and user-friendly. On June 3, the community is also in for more details on Qubic whose first announcement in early May had IOTA price take a big hike.

MIOTA in green, leading top 10 cryptos while taking the 9th spot from TRX

IOTA registered significant gains in the last 24 hours as it goes up to the $1.59. Just yesterday, it has been on $1.30. But now, it is leading the top ten cryptocurrencies with highest gains.

Bitcoin Cash (BCH), Stellar (XLM) and Cardano (ADA) are in double-digit gains as well. While Bitcoin (BTC), Ethereum (ETH), Ripple (XRP), and Tron (TRX) are also in the green with a good percentage. not as much of a surge as IOTA.

The price surge also resulted in IOTA positioned on the 9th spot again which was taken by Tron a few days back. IOTA market cap is about $4.4 billion whose majority of volume takes place on Bitfinex exchange. Binance and OKEx are other popular names with prominent IOTA trading.

IOTA foundation released its much-awaited Trinity mobile wallet app. Currently available on iOS and Android, the app is user-friendly, secure, and fully featured. Though there is no release date yet, a desktop beta version will be soon released.

Just a few days back, IOTA partnered with UNOPS which is a technical advisory wing of the United Nations.

IOTA community has been working towards their own native network to ensure that they won’t have to rely on third-party wallet providers.

“We thank the community for their patience during this process. We are confident that you will feel it was well worth the wait. The mobile beta is now live (desktop to follow shortly). Head over to trinity.iota.org and have a look.”

At the beginning of this month, IOTA took to Twitter to announce about Qubic. 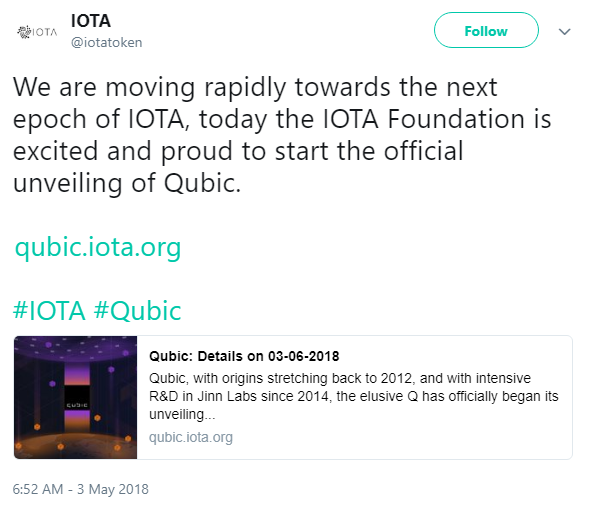 According to Coinmarketcap, this news on May 3 has IOTA price go to $2.67 from $1.88 on May 2. Just the first announcement had IOTA take a good hike. Now, as the bulls have already gathered with its Trinity wallet app release, we can expect IOTA price to go even higher.

Do you think with these developments IOTA will soon go over its December high of $5.38? Share your thoughts with us!

✓ Share:
Lauren, a blockchain, and a cryptocurrency strategist has created a project of crypto price predictions for each month.