Just as Bitcoin (BTC) continues to face downward pressure over the last week, the institutional interest also seems to wane down at the moment. JPMorgan analysts think that Bitcoin price return to $40,000 seems to be doubtful as to the institutional inflows to the biggest Bitcoin fund – Grayscale Bitcoin Trust (GBTC) – seem to be slowing down.

JPMorgan strategists led by Nikolaos Panigirtzoglou noted that the GBTC four-week rolling average “appears to have peaked”. As per the last Grayscale update, the net assets under management (AUM) of its Bitcoin Trust has dropped to $20.4 billion.

JPMorgan states that fund slid is faster at 22% whereas the BTC price has dropped 17% during the same period.

The analysts also added that as institutional inflows slow down, Bitcoin traders are likely to unwind their positions. The strategists wrote:

“At the moment, the institutional flow impulse behind the Grayscale Bitcoin Trust is not strong enough for Bitcoin to break out above $40,000″. They added: the “risk is that momentum traders will continue to unwind Bitcoin futures positions. The near-term balance of risks is still skewed to the downside”.

Recently, Grayscale has, however, resumed back to Bitcoin buying. As per data on Bybt, the Grayscale Bitcoin Trust (GBTC) has purchased more than 40K Bitcoin since January 14, 2021, pouring more than $1.5 billion.

In another analysis, long term Bitcoin holders called “whales” and miners have been losing their supplies to institutions over the last year. Adam James with OKEx Insights told Bloomberg:

“Old-school Bitcoiners sold some of their old bags to new institutional buyers with extremely large new bags to fill”.

Below is the chart that clearly shows how Bitcoin (BTC) holding among Asian whales and miners is dropping since March 2020 and how U.S.-based institutions have accumulated during the same period. 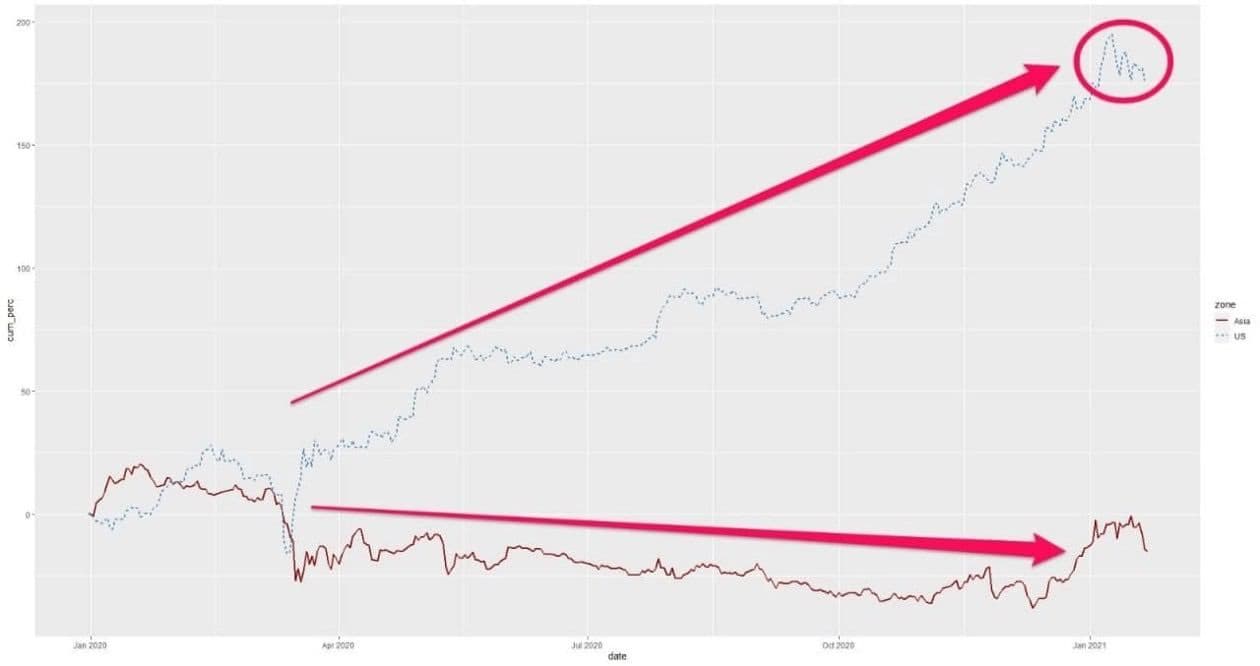