The competition will be heating up in the DeFi space very soon. Binance.com is the first major exchange to integrate native DeFi solutions on the Binance platform. Not only is this a major boon for KAVA, “the hidden gem of the decade” according to Forbes, but it is also just the beginning of what is yet to come for this high growth, high potential emerging market.

More and more value is being locked into decentralized finance protocols and platforms. Over $7 billion is spread out among a few dozen projects already, yet they all try to cater to Ethereum users. It is due time to introduce other assets to decentralized finance as well. Kava is doing exactly that by supporting Binance Coin – or BNB – from day one. Having the support of the world’s leading cryptocurrency exchange gives the project a significant competitive edge over any other DeFi project on the market today.

The big news of the week is how Kava is now officially supported on the Binance.com platform. Trading of the native KAVA asset has been going on for months now. Taking the next step in this partnership was crucial to elevate the status of both platforms in the process. It is the first time Binance.com integrates a DeFi solution directly into its platform, this first-mover advantage is priceless for Kava and its users, and should not be underestimated.

To put this integration into perspective, it is now possible for Binance users to stake into the Kava platform with BNB directly. There is no longer a need to switch between platforms or use a separate mobile application. That option will remain accessible, but having a direct integration is a lot more straightforward. Furthermore, Binance.com users now have unprecedented functionality at their disposal. Being able to leverage BNB and BUSD directly to collect liquidity mining rewards is a big step forward.

Integrating Kava in such a way confirms the potential of this DeFi platform. Anyone can integrate this solution into their platform, exchange, or dApp with relative ease. So far, no other DeFi projects can be accessed directly from an exchange, making Kava an incredibly unique offering on the market today.

The ongoing success of Kava has yielded some interesting results. Not only is there the direct Binance.com integration to keep an eye on, but the minting of USDX also seems to be going according to plan. As a result of the increasing interest in this option by Binance users, the liquidity to be minted through the pool has been increased several times in the past two weeks. It is likely that further increases will occur for the foreseeable future.

The Importance of the Binance Staking Node

Staking KAVA as a DeFi token is set up in a rather ingenious manner. Under normal circumstances, users would be virtually locked out of participating in DeFi staking, unless they acted as a validator on the network. This usually requires owning several thousand coins, and keeping the node running on a 24/7 basis. With the help of Binance, this entire process has become a lot more accessible.

Binance staking pools $KAVA of its users, stakes most of it, but keeps a portion unstaked at all times. This enables users to earn staking rewards while still being able to trade KAVA on Binance or move it elsewhere. This creates the best of both worlds where Binance stakes most of the Kava and improves the security of the blockchain while still enabling users to have a nice experience – having liquidity when they need it and earning rewards passively. 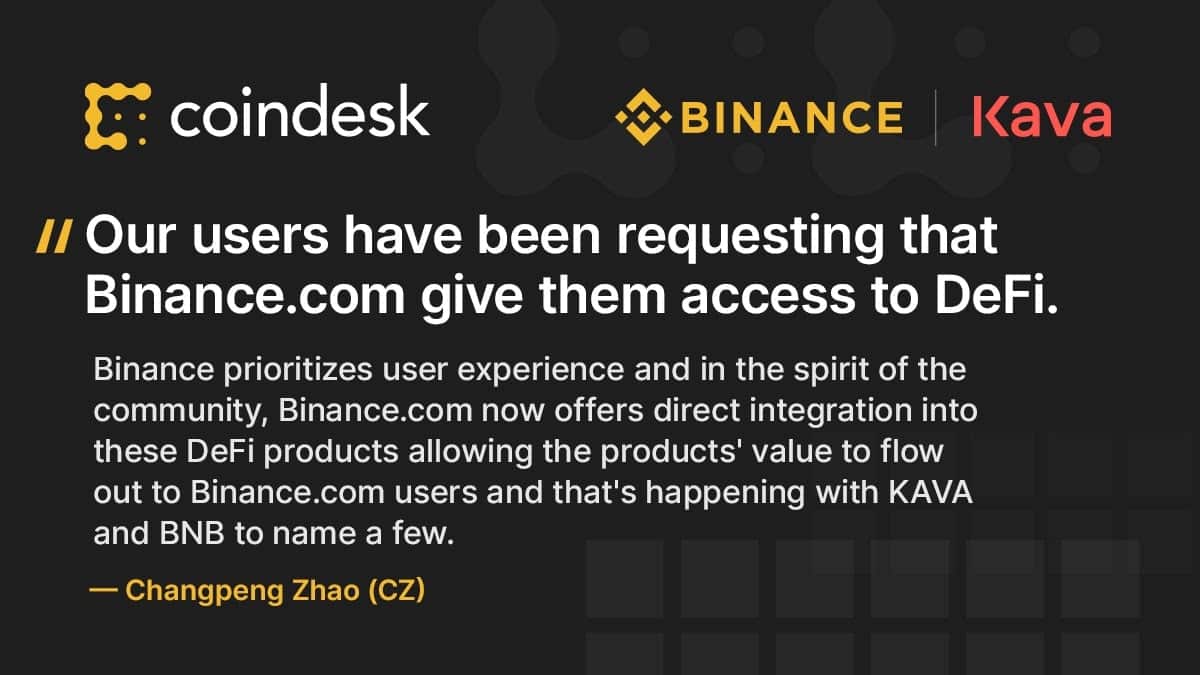 The ongoing partnership between Binance and Kava is also fueled by user feedback. To be more precise. Binance.com users have been asking for integrated DeFi solutions to put their cryptocurrency portfolio to work. Considering how Kava actively supports BNB for minting USDX, it was a matter of time until a proper integration took place.

Moreover, all of this goes to show that Kava is not your average DeFi platform. It may currently not have the total value locked of Maker or Compound, but that is merely a matter of time. This platform still has a lot of functionality waiting to be added in the near future. One of those major changes will occur fairly soon and potentially change the DeFi landscape forever. According to the CEO and CoFounder of Kava, Brian Kerr, as of this week,

All signs are incredibly bullish as far as Kava is concerned. Being integrated into Binance.com directly is an important first step toward taking DeFi more mainstream. This industry remains a bit of a niche market, but now, millions of people will be able to explore Kava’s offering natively.