Amid the rising cryptocurrency regulations, Sweden’s central bank, the Riksbank is looking at launching a digital currency that could make Sweden the first economy to have its own cryptocurrency. This national cryptocurrency e-Krona can be seen in the market in about two years.

Sweden to launch its own cryptocurrency e-krona

In Nov 2016, the Riksbank revealed that it was performing R&D for the possibility of launching it’s very own digital currency called e-krona. Now, James Pomeroy, an HSBC global economist predicts that Sweden will be the first country to do this and may launch it within a next few years. A prominent reason that Sweden is well positioned to be a leader in this field is, it is already more card friendly than others and more comfortable with non-physical functional transactions.

When Sweden’s people were asked “How did you pay the last time you made a payment?” 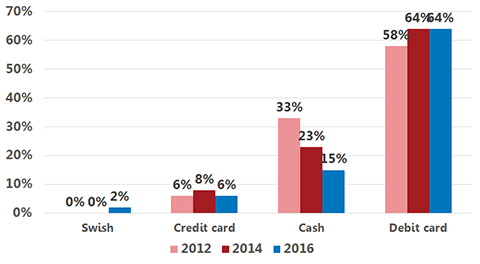 Sweden’s potential to become the first cashless society led to a research note entitled  “Sweden’s big year: Can the economy overcome some challenges?” by the HSBC economist James Pomeroy. Moreover, Riksbank had always been into monetary advances as pointed by its governor Stefan Ingves:

“It was in Stockholm that the first modern banknote was created more than 350 years ago and that it is here, in Sweden, that cash is currently taking its last breaths. Perhaps the Riksbank will be writing history again.”

According to a media source, Pomeroy explained:

“Sweden is noticeably further ahead than the UK, mainland Europe, and the US, which is a long way behind in this trend. Because of how technologically developed it is, you see a lot of new interesting things in economics quite a while before you see it elsewhere. Sweden is really a standout in how cash usage is changing, with the use of cash for payments dwindling from about 40 percent in 2010 to about 15 percent in 2016. The Riksbank will publish more data on this year and I wouldn’t be surprised at all if it has fallen below 10.”

How will e-Krona work?

As per the HSBC analysts, the concern is what specific form this cryptocurrency will take. According to the reports, one option is to have a blockchain style registered system that would be using peer-to-peer e-krona accounts with a central database, much similar to bitcoin.

Another option would be a value-based system. Here, a card or an app would be used with credit added to it that would act as an intermediary by linking transactions to a database.

Riksbank is not the only central bank that is considering a state-sanctioned cryptocurrency as Russia is already contemplating a CryptoRuble and Israel showing interest in the digital version of shekel. However, Riksbank certainly seems more committed than others.