Tesla Inc, the electric car maker giant has sold 10% of its $1.5 billion purchase made in February earlier this year as per the company’s Q1 earnings report released on Monday. The earning report indicated that the EV maker has made $272 million from the sales of Bitcoin. Tesla had bought Bitcoin under $35K apiece and the top cryptocurrency is currently trading around $55K having reached a new ATH of $64,689. The decision to add Bitcoin to its treasury has proven quite fruitful for the most valuable car company as it has made more profit within 2 months of BTC purchase than the total combined profit from the sale of its highly popular electric cars and SUVs. 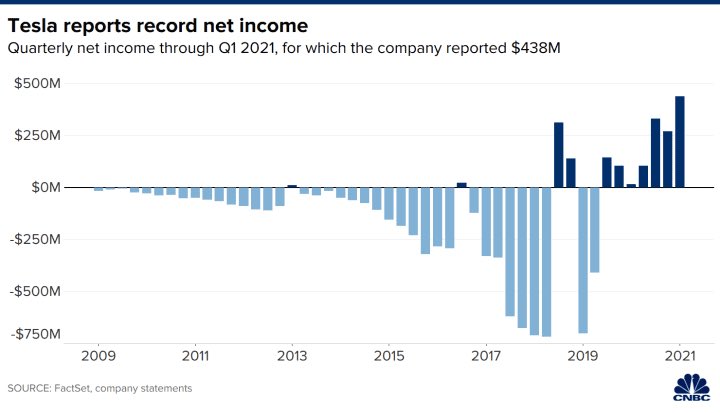 Zachary Kirkhorn, the CFO of Tesla had said that their Bitcoin investment is proving to be a great decision for the firm in terms of liquidity and they intend to invest more in the top cryptocurrency in the long term. He explained,

“Bitcoin has proved to be a good decision, a good place to put some of our cash that’s not being used for daily operations…and be able to get some return on the intended to hold long-term.”

The news about Tesla selling a portion of its $1.5 billion holdings didn’t go down well with many crypto proponents and some even accused Musk of purposely hyping Bitcoin to sell it at a profit. However, Tesla CEO Elon Musk during a Twitter conversation revealed that the electric car manufacturer has sold a small portion of its Bitcoin holdings to prove the market liquidity and how Bitcoin can replace cash as liquidity on their balance sheet.

No, you do not. I have not sold any of my Bitcoin. Tesla sold 10% of its holdings essentially to prove liquidity of Bitcoin as an alternative to holding cash on balance sheet.

The Q1 earning report of Tesla indicates the 10% sale of its Bitcoin holding had quite a positive impact as it contributed $101 million towards ‘the net of impairments, in ‘Restructuring and Other.’ The sale of Bitcoin by Tesla did create a minor controversy of the sort, however more importantly it answered a long-awaited question on whether Musk himself holds Bitcoin or not, and the answer is a big yes as confirmed by Musk himself.

Elon Musk’s tweet about Bitcoin in the past has led to market volatility but the recent revelation didn’t impact the BTC price as it continued on its path to recovery after a week-long correction and consolidation. Bitcoin price is currently hovering at $54,800 having risen by nearly 5% for the day and second day in the green.