Bitcoin is currently struggling at $3,660 after falling over 10 percent this week. However, VC investor, Max Keiser is not at all affected by the market as his investments in crypto ventures are up between 10-100x. Meanwhile, the research paper by the Federal Reserve Bank of St. Louis notes the huge supply of altcoins are affecting the Bitcoin prices in the market.

At the time of writing, Bitcoin has been trading around $3,665 while managing the daily trading volume of $4.5 billion. The leading cryptocurrency is down about 82 percent from its all-time high.

Despite the ongoing crypto winter, experts like Max Keiser are unperturbed as he said in response, “What Bear Market.” A venture capitalist, Keiser took to Twitter to share,

However, for some like Anthony Grisanti, who was a guest on CNBC’s Futures Now segment maintained his bearish sentiments on Bitcoin stating,

“A move down to $3,000 would represent a real weakness in this space. This could be the driver that would get people to bail out of [Bitcoin], and push [the asset] even lower.”

According to the experts and analysts in the crypto space, a bottom at $3k is a real possibility for Bitcoin in 2019. Recently, Anthony Pompliano or popularly known as Pomp in the crypto community noted that Bitcoin could touch ~$3,150 and go even lower.

$3k is a real possibility for Bitcoin, however, on the other hand, in the long term $50k or $150k “will likely be accurate,” as well. The die-hard enthusiasts of Bitcoin refuse to go down with price and are still very much confident in the number one cryptocurrency. The severe fall in Bitcoin price, according to the research published by the Federal Reserve Bank of St. Louis could be due to the increased supply of altcoins.

“While Bitcoin’s price is not likely to fall to zero, the prospect of a flood of Altcoin competing with Bitcoin in the wealth portfolios of investors is likely to place significant downward pressure on the purchasing power of all cryptocurrencies, including Bitcoin.” 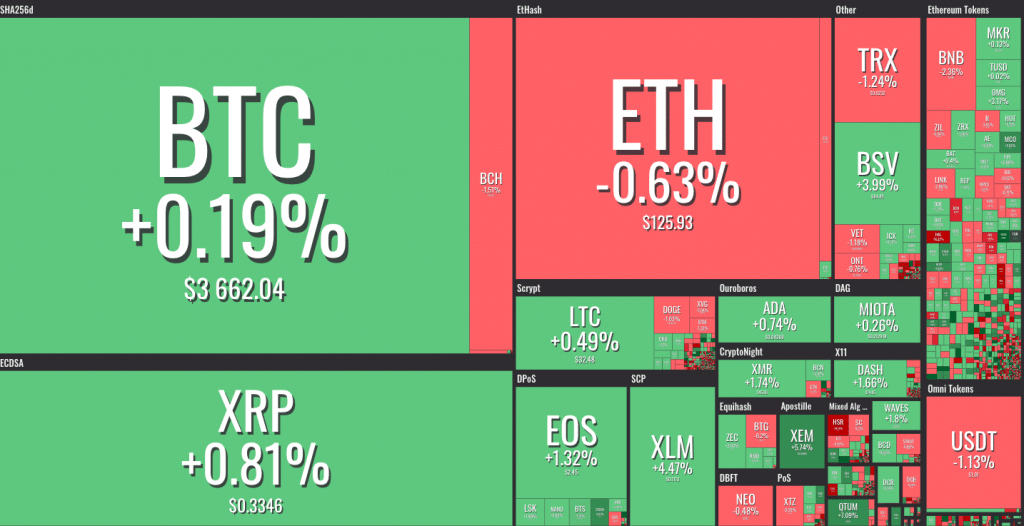 Currently, among the top cryptos, Ethereum and Tron are bearing the losses between 1 to 3 percent. Meanwhile, altcoins viz. XRP, Stellar, and Litecoin among others are registering greens.