Binance has announced an increase in gas price to 189 Gwei for the withdrawal while keeping the withdrawal fee same. At the same time, gas price on Ethereum network as per Etherscan has also risen many folds reaching to its peak while transactions haven’t seen much difference.

Spike in Gas price on withdrawal on Binance

The popular crypto exchange Binance has increased the gas price on the withdrawals to the 180 Gwei i.e. 0.00000018 Ether. The exchange cites congestion on the Ethereum network the reason behind this decision. However, the withdrawal fees will remain the same during this period.

#Binance has temporarily increased Gas price on withdrawals to 180 Gwei until the congestion on the $ETH network reduces.
Withdrawal fees will remain the same during this period. pic.twitter.com/LP4rwmIhxB

The news came in tandem with the increase in the gas price on the Ethereum network in general. As per Etherscan.io, on July 1, the maximum gas price has reached 0.00002 Ether.

Gas is basically a unit of measurement just like bytes to bitcoin. As for gwei, it is a unit of eth meaning 1 eth is equal to 1 billion Gwei. Just from yesterday’s 59 gwei, currently, it has reached close to 100 gwei per gas for an ethereum transaction. This spike is well over the January’s high of 95 Gwei.

This sudden, dramatic hike in Ethereum’s price came when the transactions on the network are not as high as of January.

The total gas usage is at its peak while the gas limit is unchanged that means, it has the capacity to process more transactions.

Though the exact reason is not known yet, reportedly in China, a decentralized exchange is having people vote to decide the coin to list. This would be apparently decided by the number of addresses that have voted. Airdrops just might also be the reason.

If we take a look at the top 10 miners, as shown in the image below, the three at the bottom has the highest gas price of 71 Gwei, 65 Gwei, and 52 Gwei. These prices are extreme in comparison to the top three where gas price is in 1 Gwei, 1 Gwei, and 2 Gwei. 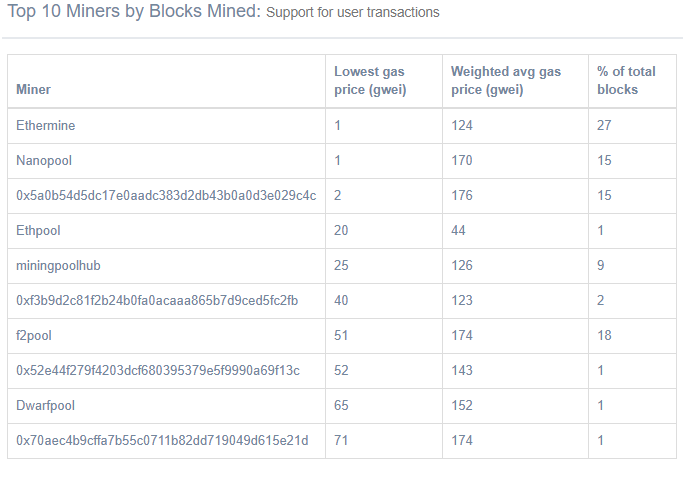 But there is also a difference in the percentage of blocks which is also in extreme between both groups but in reversal. Apparently, the gas price rise, which is not clear yet if these miners are refusing to mine below 50 Gwei or just happened to be mining these transactions, didn’t work in their favor.

According to the Coinmarketcap, at the time of writing, Ethereum has been at $474 with a rise of 5.45 percent in the past 24 hours. The world’s 2nd biggest cryptocurrency has a market cap of $47.6 billion while managing the daily trading volume of $1.8 billion.

What are your views on the rising gas price? Share your thoughts with us!