The controversy around Roger Ver and his promotion of Bitcoin Cash seems never-ending. Every time he has pushed for the BCH coin over Bitcoin, he has landed up in a controversy proving the theories and stories he is building around BCH is untrue. Its also been a tough time for Ver to win true believers that BCH is actually moving ahead of Bitcoin.

Commercial use of Bitcoin Cash dropped to $3.7 million

A recent analysis put forward by blockchain analytics firm Chainalysis said that Bitcoin Cash, is barely being used in commerce. A review of payments received by the world’s 17 largest crypto merchant processing services, such as BitPay, Coinify, and GoCoin, found that Bitcoin Cash payments slumped to $3.7 million in May from a high of $10.5 million in March. Bitcoin payments totaled $60 million in May, down from a peak of $412 million in last September.

“There are fewer users of Bitcoin Cash, fewer holders,” Kim Grauer, senior economist at Chainalysis, said in a phone interview to Bloomberg. Adoption in commerce has been low, partly the result of concentrated ownership, Grauer said. About 56 percent of Bitcoin Cash is controlled by 67 wallets not located on exchanges, according to Chainalysis. Of those, two wallets hold between 10,000 and 100,000 Bitcoin Cash. And chances are, the wealthiest holders are the ones sending a lot of the traffic to merchant services, Grauer said. 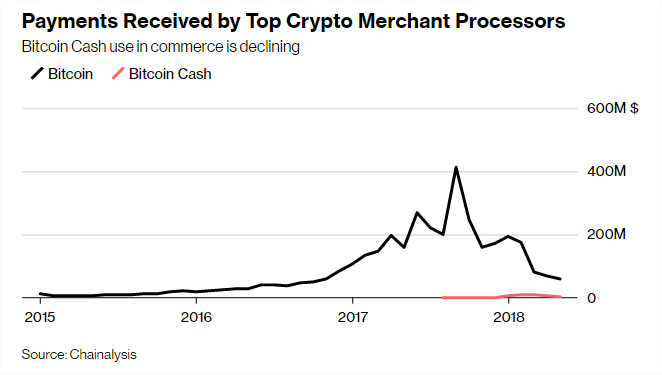 Bitcoin Cash split from Bitcoin on Aug 1, 2017, and since then Ver who is also the co-founder of bitcoin.com switched allegiance to Bitcoin Cash, invested in it, and overhauled his Bitcoin.com site to focus on the cryptocurrency. His claims of BCH acceptance seems to be falling apart, being called as a scamster by many.

“We are working on fixing all of these things and promoting Bitcoin Cash as Bitcoin. It takes time to update everything though”.

This comment was in reply to a query raised by a user stating that the bitcoin.com website is very misleading and when the exchange price of BCH is clicked up, all the graphics, charts and stats that are shown are that of BTC.

This is not the first time Ver has been termed as a scamster. Earlier this year another redditor had called Roger Ver a scammer & liar in relation the Bitcoin.com wallet. Another user had commented the same,

“It is an attempt to put BCH on equal footing with BTC, which a lot of people have a problem with, considering BCH is basically co-opting the Bitcoin name for it’s brand recognition and Roger Ver is pushing for a movement wherein Bitcoin is referred to as Bitcoin Core so that it’ll be easier to make “Bitcoin Cash” and “Bitcoin Core” seem like equals, so that a further push can insist Bitcoin Cash is the Bitcoin while Core is a failed experiment.

While the wallet doesn’t do all that, it puts BCH and BTC on equal footing which many think is a slippery slope, especially considering how vile Roger Ver has been in so many of his previous actions, and how awful the /r/btc sub is in general.”

In the latest edition bulletin update of Bitcoin.com – Official Channel, Roger Ver, famously known as Bitcoin Jesus and the face of Bitcoin Cash [BCH] reported that Bitcoin Cash will hit ‘tens of thousands of convenience stores’ in Japan. He had shared a similar update in June 2018. But with the data Chainalysis has released on ground realities seem different.

It’s already advocates of BTC and BCH, have been trading barbs on Twitter, Reddit and other forums ever since, and even engaged in the recent debate over ownership of Bitcoin.org. Looks like the story Ver has been scripting is not working at all.

Will Ver’s scamster comments actually harm prospects for BCH? Do let us know your views on the same.

Article Name
Bitcoin Jesus Roger Ver is a Scamster, Claims a Redditor
Description
BCH coin over Bitcoin, he has landed up in a controversy proving the theories and stories he is building around BCH is untrue. Its also been a tough time for Ver to win true believers that BCH is actually moving ahead of Bitcoin.
Author
NILESH MAURYA
Publisher Name
COINGAPE
Publisher Logo