Bitcoin price today crashed below $40,000 to register a new 14-week low amid panic selling from short-term holders. The price crash also led to a correction of 40% since the last ATH of $64,683 marking the biggest correction this bull season. While new traders are panic selling owing to several FUDs in the market, long-term holders with over 1 year of holding time have continued to surge even during these times and rose to a monthly high.

The fear and greed index has reached a level of ‘extreme fear’ reflecting short-term market sentiments. A correction of near 40% was always on the cards given the mammoth rise over the past four months. Mike Novogratz, even called it a ‘tax day’ for traders who made a ton of profit. 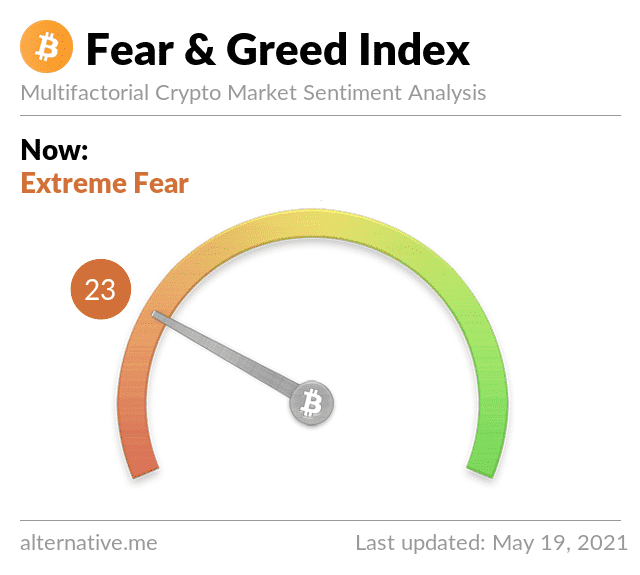 A 40% correction for sure is a cause of worry for many, but those who have seen the 2017 market do not seem much bothered, as last time around the market was much more volatile and several corrections of over 30% were recorded in a much shorter period.

The recent panic selling among new investors was largely attributed to several FUDs that resurfaced over the past couple of weeks. The first one came from Elon Musk who turned from a Bitcoin Hero to Villan within a couple of months. Tesla stopped the Bitcoin payment option for their cars citing environmental concerns and Musk tried justifying the dubious FUD resulting in a Twitter war that led him to threaten to sell all his Bitcoin for Dogecoin.

Many started speculating that Tesla might have sold its Bitcoin holdings and that is the reason Musk has gone rogue trying to tank the market. however, he clarified that the electric car manufacturer is still holding to their Bitcoin.

Tesla had made nearly $2 billion in profits when BTC reached its ATH last month, and if it didn’t sell its holdings their profit is completely wiped off at this point.

Terra Virtua’s Mechagodzilla NFT Sold for $33,700 to Rare Digital Art Collector, Blockmuse
Non-fungible token (NFTs) has been in the news for quite…