In its official announcement, the recently hacked 8th largest crypto exchange, Bithumb states that currently undergoing investigation, the damage is expected to be less than what have been first reported. It also ensures that customer’s assets are intact and all the damages will be covered by the company only. However, the deposits and withdrawals aren’t opened yet as changes are being made but other options could be provided soon.

Overall damage expected to be lower

Bithumb has released an official “June 20, Incident Report” that details about the hack that resulted in the loss of about 35 billion Korean Won or $30 million worth of cryptocurrencies and the steps the exchange is taking in order to ensure the safety of user’s assets on the platform. 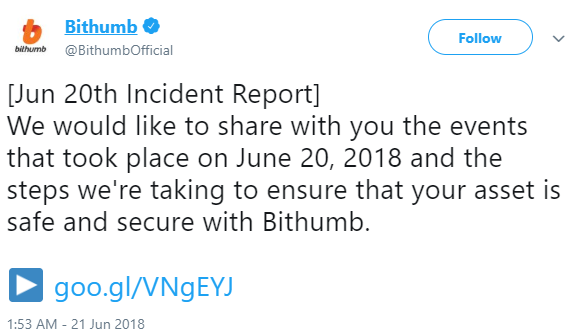 The exchange states that right after the incident, the exchange quickly followed the procedure to report the incident to KISA and intimated the authorities of the stolen cryptocurrency. However, the exchange claims with the investigation currently undergoing, the loss is expected to be not so severe, “the overall scale of damage is getting reduced”.

Though the exact amount is not revealed yet and would be made known later, the exchange ensures “the overall damage will be less than the amount we initially expected.” Talking about the scale of damage on company asset, Bithumb has been administering the customers as well as company assets. The exchange has completed the process of storing the cryptocurrencies of customers and KRW (Korean Won) assets in a cold wallet and bank respectively.

Company funds to cover the losses

Bithumb makes it clear that the amount of damage incurred from the theft will be fully covered by the company’s own fund. The exchange has about 500 billion KRW worth company’s funds. It further ensures that all the customer’s asset is “intact and fully secured”.

“Please be reminded that our new report of the audit will be released in early July” requests Heo Back-Young, CEO of the exchange. The deposit and withdrawal service is currently halted on the exchange as the company is currently working on changing its wallet system.

It is a good thing that the exchange is taking the security of the system very seriously and taking steps to “prevent any similar cyber-attacks” in future. There is no exact timeline for when the changes will be completed. But the exchange does share the possibility of a compensation event for the current withdrawal delay, for which the announcement will be made in due course.

Currently, Bithumb is working with the government agencies including KISA, AnLab, and National Police Agency to find the “exact cause” and making the required improvements.

Young concludes the announcement by promising its users that a systematic procedure will be established and the highest level of security and services will be provided to the customers.

What do you think of the steps being taken by Bithumb? Share your thoughts with us!