Yesterday, bitcoin lost more than $200 of its value and dropped down to $7,870 after a whale unloaded $50 million worth of BTC in a single Bitfinex trade. This came just a day after the third largest wallet let go of about $50 million bitcoin. However, BTC price is back to being over $8k.

A few days back, Bitcoin enthusiasts got a reason to be happy about as its prices crossed the $8,000 mark. However, this crossover was short-lived as yesterday, as bitcoin got dumped down to $7,870. Over the course of 20 minutes, the price of several cryptocurrencies took a hit. An anonymous digital account with wallet 3D2oetdNuZUqQHPJmcMDDHYoqkyNVsFk9r was having the balance of $1.49 billion. On Tuesday, this balance was reduced by 6,500 bitcoin. According to the bitinfocharts, the average sale price for those bitcoins were $8,146.70 that gives a value of over $50 million. 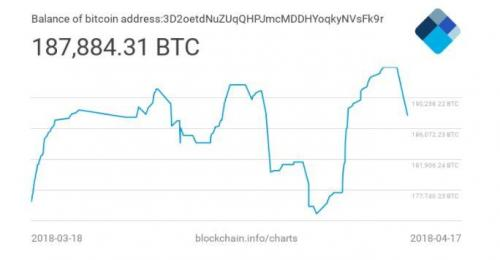 This was a day after the third largest wallet that purchased more than $400 million worth of bitcoin in February, unloaded 6,600 bitcoin at $8,026 average price.

The bitcoin drop created a bustle in the crypto market with people speculating the reason behind the sharp fall. A Redditor wrote:

“Holy hell, these dumps out of nowhere. I was looking at some alts, then I check back to bitcoin and BAM it dropped $200 instantly.”

Initially, New York Attorney General Eric Schneiderman was the suspect as he announced the launch of an inquiry into Coinbase among 12 other cryptocurrency exchanges to get the information on their volume data, fees and procedures followed regarding margin trading. However, bitcoin dropped down four hours after this news.

In the past as well, whales have been the reason behind the bitcoin selloffs as happened in early March, when Mt. Gox trustees announced the liquidation of over $400 million worth of bitcoin and bitcoin cash.

Right now, bitcoin is riding at $8,095. As for other cryptocurrencies, some are well in green while a few are experiencing the red as well.

Do you think BTC price will soon cross the $8,500 barrier?

BTC Hashrate Drops to Lowest in 2021, North America All Set to Become New Crypto Mining Hub
China’s crackdown on crypto does not seem to end. In…

Just-In: Goldman Sachs Becomes First Major US Bank to Trade Bitcoin Futures
As reporter by CNBC sources Goldman Sachs has started trading…
Stan Peterson 145 Articles
Being an active participant in the Blockchain world, I always look forward to engage with opportunities where I could share my love towards digital transformation.
Follow Stan @