Ether (ETH), the second-largest cryptocurrency by market cap is on its path to recovery after falling below $2,000 during last weekend’s market sell-off. The price of ETH is currently trading at $2,886 and looking well set to breach $3,000 soon. The spot volumes of Ether have also returned to pre-market-correction levels and currently topping $20 billion. The current spot volume of Ether has surpassed the volume of Bitcoin last month. 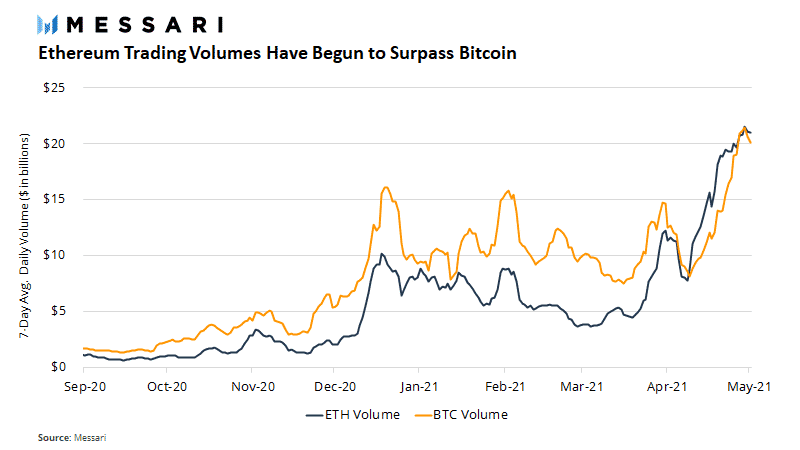 Right before the market crash that saw more than $500 billion, Ether was on a massive, bullish surge and reached a new ATH of $4,m362 almost seeing a 4X surge from its 2017 high. Ether’s recent rise in price is reflective of its growing demand amid retail traders as well as the newly found interest of institutions who see it on par with Bitcoin in terms of a store of value and as a form of currency.

Recently, JP Morgan and Goldman Sachs reinstated institutional push for ETH and both the financial giants heaped praises for Ether’s market depth and a slew of possibilities that the Ethereum ecosystem offers. Goldman Sachs even claimed in its recent market report suggested that ETH can overtake Bitcoin as a store of value.

During late February and March, the Ethereum network was hit by another miner gas fee issue that made it nearly impossible for many Defi protocols to use. The developer community had approved the EIP-1559 proposal for the June upgrade that would cut the miner monopoly over transaction processing which many believe would make the network more scalable and usable before the complete roll-out of ETH 2.0.

In light of the growing gas fee, many Ethereum alternative platforms gained a lot of traction during the peak of the gas fee issue. The ETH network’s bullish momentum can help it regain most of its losses in the recent crash due to its market depth as pointed by JP Morgan.