Bitcoin bulls finally took off on Christmas eve seeing the top cryptocurrency register a new all-time high above $25,000 on many exchanges, after consolidating above $23,000 for the past week. The price rally made Christmas merrier for many as it was kind of poetic that Bitcoin breached the $25K mark on 25th December.

Bitcoin also managed to surpass the $460 billion market cap on its way to new ATH triggering a plethora of articles on “Bitcoin Flipping VISA’s Market Cap,” the only problem though, VISA’s current market cap stands at $487 billion. 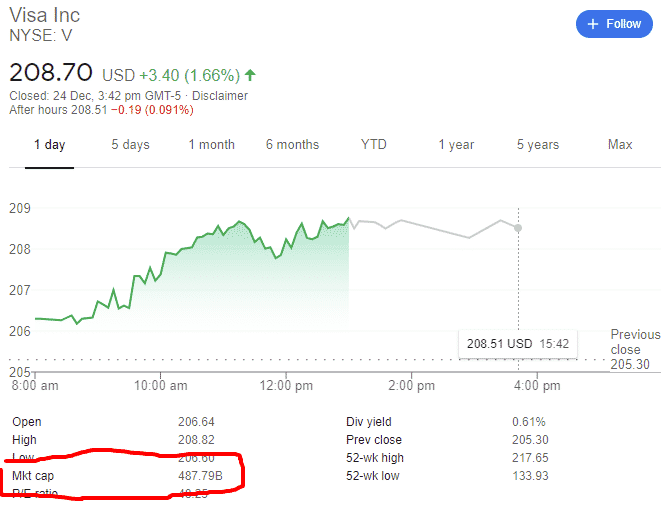 Most of the media outlets used an outdated chart claiming VISA’s market cap at $460 Billion, however, the chart does not really show the Bitcoin market cap above VISA either.

Bitcoin Would Eventually Surpass VISA and Many More

Bitcoin unlike the 2017 bull run does not look in any hurry ever since it roared past the key resistance of $20,000, primarily because of over-buying by institutions. Paypal, GrayScale, Sqaure Inc, and Microstrategy are currently buying more bitcoin than being produced by the miners every day. MicroStrategy, the software giant is currently heading the institutional adoption curve as they have bought over $1.3 billion worth of Bitcoin since August, converting a portion of their treasury cash into the world’s new hedging asset.

Bitcoin within a decade had managed to flip the market cap of JP Morgan, MasterCard, Walmart, and several other multi-billion dollar enterprises and another rally from its current price could well make it more valuable than the centralized payment giant VISA as well.

While many have compared bitcoin’s ongoing bull rally to 2017’s bull run, the top cryptocurrency has spent more time above $23,000 than the entire bull rally which took bitcoin’s price from $13,000 to near $20,000 in December of 2017, however, bitcoin could not hold its position above $19,000 for long and price crashed soon after. Many believed the same to happen this time around as well, however, the institutional FOMO has ensured that BTC is still underpriced in the current bull market.