ICON has come up with its quarterly updates for its stakeholders outlining its progress and achievements it has made in various departments in line with its roadmap slated earlier. The progress is  mapped in for key focus area’s that the project has identified namely 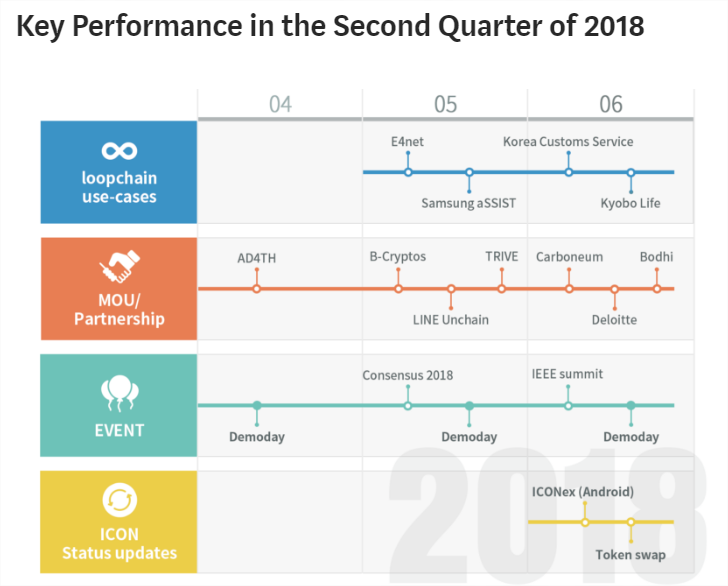 ICON’s core blockchain engine, loopchain, has got into a variety of partnerships and MOUs to allow real-world use-cases of blockchain technology. ChainID, the world’s first blockchain-based joint authentication service based on loopchain, will be utilized in combination with Samsung Pass in many new and upcoming Samsung smartphones. Through the MOU with E4net, which has governments and banks and financial institutions as its major clients, ICON has been able to lay the foundations on which loopchain can be applied in a wide variety of areas. ICON also has successfully applied loopchain technology to the customs clearance dealings of Korea Customs Services.

ICON has made great partnerships this quarter to expand the blockchain ecosystem It has partnered with ith AD4TH, a leading tech company in Korea, to setup Deblock, an accelerator focused on growing the ICON ecosystem. It has also signed a strategic partnership with B-Cryptos, Japan’s first crypto fund, to help support the growth of the blockchain ecosystem in Japan. With an education in mind, ICON has tied up with TRIVE VC in Singapore to create an ICON-focused curriculum at TRIVE’s programming schools in Southeast Asia. Other partnerships include JV with Line plus to develop Unchain and Carboneum for social trading.

The events that ICO participated this quarter include  Asia Crypto Night, where they displayed a few recent product releases. ICON has also been holding the New Kids on the Block(chain) Demo Day on a monthly basis since April to give the opportunity to new DApp projects.

In the second quarter of 2018 ICON released both ICONest, the token launch platform, and the Android mobile wallet (iOS version coming soon). The token gas moved away from ERC 20 tokens and has moved on its MainNet getting it closer to its vision to “Hyperconnect the World”.

Q2 seems to be a great quarter for ICON if it continues at the same speed it may be able to achieve its vision in a much quicker time than expected.

What do you think of ICON project and its development? Do let us know your views on the same