Docademic is up by more than 26 percent while the crypto market is moving at a slow speed. In comparison to the majority of the crypto market which has been through serious fluctuation in the past week, Docademic has been on a continuous upward momentum. Famous crypto influencer, John McAfee has been in strong support of this cryptocurrency which is aiming to change the medical world.

Cryptocurrency market has been through a lot of fluctuations lately. Right now, the majority of the coins are experiencing a bit of dip with Bitcoin down by $1.29 percent, Ethereum (ETH) falling by 1.58 percent, a 3.76 percent drop in EOS price and so on. However, there is one coin that is rising at a great speed despite a sluggish movement in the market.

Docademic (MTC) has the bulls charging it a full speed as it spikes 26.64 percent in the last 24 hours. At the time of writing, Docademic has been sitting at $0.36 while registering high greens in trading against BTC and ETH as well. With a market cap of $101.9 million, MTC is managing $2.9 million trading volume in the past 24 hours. It has been a great journey for Docademic as just last week, on June 10, MTC was at 191 position according to the Coinmarketcap. Now, it is in 98th position.

In the last 7 days, while cryptocurrencies like Bitcoin have been through constant up and down, Docademic has been only rising. 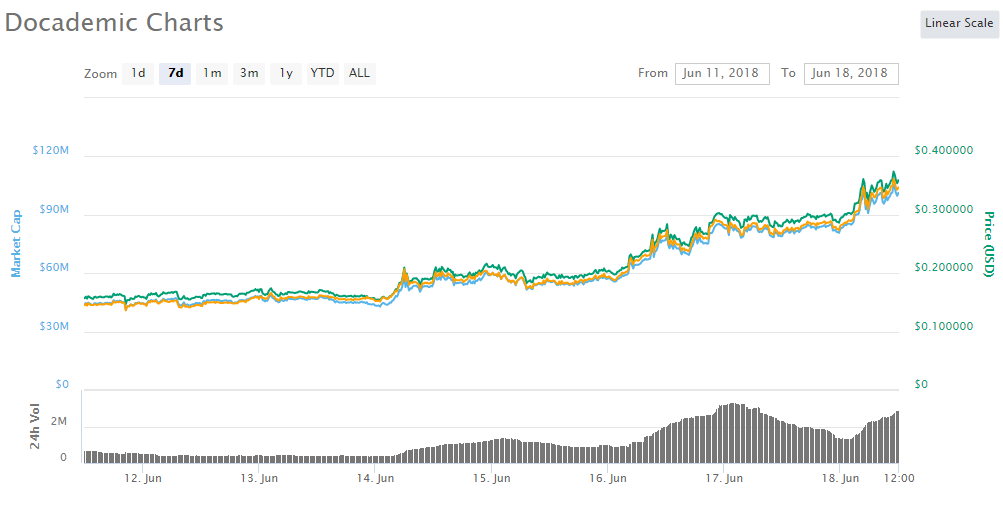 With the aim to provide free basic healthcare through “universalization, Integration and Improvement of Medicine using AI and Blockchain”, the cryptocurrency is targeting the most imperative factor of our life.

John McAfee in favour of Docademic

Crypto influencer John McAfee has been extremely supportive of Docademic (MTC) cryptocurrency and expressed it constantly on the Twitter.

Recently, he announced his 2020 Presidential Election Run and stated: “I am choosing Docademic as the healthcare basis of my presidential platform”. Reportedly, Docademic platform is already being used by thousands in about 20 countries across Latin America. It further aims to partner with governments and healthcare institutions for the widespread adoption of its Medical Token Currency (MTC).

With exchanges like HitBTC adding Docademic (MTC), John McAfee tweeted the list of exchanges it is now available for trading.

Docademic can now be found on the following exchanges: pic.twitter.com/9N8php2OOe

Labelling it as a diamond, McAfee commented:

“We are talking about shit coins every day. Do you ever look in these piles of shit, for the diamonds, the gems?”

In the current slow market, Docademic is making huge gains while continuing to add exchanges to its names. It would be interesting to see if MTC will continue its bull run or lose its lustre soon?

Do you think Docademic is up for a long bull run? Share your thoughts with us!