Nexus mutual is a cryptocurrency based insurance product that offers its users protection against smart contract vulnerabilities. It provides Defi investors with protection for specific activities within the crypto ecosystem. You can refer to it as insurance, but the team isn’t allowed to call it that due to legal implications.

Meanwhile, it is different from our fundamental knowledge of traditional finance. Although traditional insurance firms provide an essential service, they, like the banks incentivize profits. Sometimes, they can prioritize their profit above the needs of clients.

In all our day-to-day living, we need insurance. However, we can improve it to serve clients and not large corporations better. Nexus Mutual has a long way to go before it can disrupt the status quo, but it is currently helping us to reimagine the current occurrence.

It is for this reason that we have chosen to review the Nexus Mutual blockchain-based project to explore its potential and future possibilities.

There are pros and cons to each of these insurance models, Nexus Mutual incorporates the best features of both. The Nexus Mutual project is still young, hence the limited nature of its applications. However, the applications are worth our attention. You need to understand that Nexus doesn’t protect you from earthquakes, car accidents, or damage. Instead, it is solely focused on a crypto-only use case; Smart contract failure.

Veterans and newbies in the crypto-space understand that the ecosystem is fraught with vulnerabilities. You have read about exchanges being hacked, or malfunctioning of token wallets, or fat-finger errors. Meanwhile, the common concern today, especially in decentralized finance (Defi) is that of smart contract vulnerabilities.

We have seen some smart contracts that were audited by notable third-parties fall victim of some complex attacks. In most cases, both users and platform founders suffer a loss of funds. Nexus Mutual is working to mitigate this particular vulnerability. Its “Smart Contract Cover” provides users with an extra level of safety for such events as the DAO hack of 2016. There are firm definitions of the type of events that would warrant a payout.

and the active cover amount per contract wise is as below:

Users will not get a payout for phishing attacks or any problems created due to network congestion. Also, oracles, miners, and other entities outside the smart contract are not covered. Therefore, it is always important to review the conditions of the type of coverage you want to purchase.

How Does Nexus Mutual Insurance Work?

In simple terms, Nexus Mutual allows the members of its community to buy Cover against a particular smart contract risk. This is an enticing proposition, but how does it carry out this task? You go their website and click on “buy cover” from the home page. You will decide the particular protocol you want Cover for. The includes all the major Defi protocols from 1inch exchange, yEan Finance, Opyn, and many others.

Once you are done that stage, you then go ahead to select the amount of coverage you want, and the length of time. After you have completed this step, if you are not an existing member, you will be asked to join the Mutual. Before you become a member of the Nexus Mutual, you will be required to pay 0.002ETH and completing the standard KYC/AML processes.

Being a member also means that you are a Nexus Mutual token (NXM) holder. All members are responsible for arbitrating governance proposals, claims, and all risk assessments. The members have to assess the risk level associated with each smart contract. In the case of an exploit, the members will vote to decide whether the claim is legitimate and hence requires a payout.

For examples, if you stake your NXM token in a high-risk smart contract, you risk losing a portion of that stake if that smart contract is hacked and a claim is made on that hack.

According to Kayleigh Petrie, the director of community engagement of Nexus Mutual;

Any staker who can identify which contract is less risky before other members will earn rewards for their early signal.

Once a claim is initiated, NXM holders will be asked to vote on whether the claim (smart contract hack) is legitimate. Voting in line with the broader consensus earns a holder more NXM token while voting against the consensus will lock a voter’s token for a period. Any user who attempts to fulfil claims that fall outside of the definition of coverage may have their tokens destroyed.

The Use Cases & Membership of Nexus Mutual

Here are the various ways in which you can participate in the Nexus Mutual platform.

The first product of Nexus Mutual is the Smart Contract Cover, which covers “unintended uses of code.”

Every member who buys Smart Contract Cover chooses a fixed sum known as the cover amount. The Cover Amount will be paid out if the Claims Assessment process approves the claim. The implication is that the payout wouldn’t necessarily be equal to the losses incurred by the smart contract hack. There are steps you must take to buy a cover as a first time user of the Nexus platform.

Once you have done all these, a quote is generated and the Cover can be purchased if you have enough capacity at a coverable price. You will be asked to become a member of Nexus Mutual at this point if you are not a member.

Buying cover is the major activities carried out by the members of Nexus Mutual. People join the community to provide Cover for common risks. Once a cover has been purchased, the member’s contribution flows into the Capital Pool, and it improves the position of the mutual. The Cover is priced to generate a long-term surplus which is jointly shared among the membership base.

A Cover holder can make a claim within the Cover Period or up to 35 days after the Cover Period. The fixed Cover Amount shows that claims assessment is a simple “yes” or “no” and does not consider the amount of damage that was done. To submit a claim, the Cover Holder must stake 5% of the NXM tokens locked in at the time of buying Cover.

If 10% of NXM tokens are locked in at the Cover purchase, the Cover Holder can submit the claim for assessment twice. This “cost” is an incentive to mitigate fraudulent claims. Once a claim is successful, the stake is returned to the user. Meanwhile, if the claim is denied, the stake will be forfeited.

Although in the short term, the other members do not benefit from a single successful claim, in the long-term, it is in the interest of the membership base for the mutual pays legitimate claims. Without such an occurrence, the trust within the system will be eroded. Therefore, it will be difficult for new customers or capital providers to participate in the future.

Nexus Mutual does not approve or reject claims like traditional insurance companies. On the Nexus platform, it is decided through the member voting process. Members act as Claims Assessors by voting on claims submitted by other members on the platform. This member voting process has the absolute discretion on whether to pay a claim or not, and their opinion is final. Although there is no opportunity to escalate a claim to any regulator, it comes with the benefit of flexibility. The members can decide to pay claims as they choose, and that includes by positively applying their discretion. However, this may include paying a claim that may be declined according to strict terms and conditions, but there is a genuine loss.

For this, to work, there must be an incentive for people to vote on claims and also, a strong disincentive to mitigate fraudulent activities. To achieve this, am award is distributed to those Claims Assessors voting with the consensus outcome and punishing the people voting against.

Nexus Mutual aims to revolutionize the insurance industry by transition power for corporations back to the people. Anyone can become a member and participate as the Mutual is wholly owned by the members of the Nexus Mutual community. The members contribute Ether (ETH) into the pool in return for the Nexus native token (NXM). Nexus Mutual deploys complex smart contract systems on the Ethereum Mainnet.

The project has been dominating the industry and has surpassed $74 million in active coverage. Currently, Nexus Mutual covers for 206,763 ETH; which is approximately 1% of the total Defi market.

Nexus Mutual is established as a limited company by guarantee in the UK, and they have been approved by the Financial Conduct Authority (Bank of England) to use the protected word “mutual” in their name. As a member of this community, each user becomes a part-owner of the mutual, with membership rights represented by NXM tokens.

The smart contract is verified on Etherscan. The approval by the bank of England and its verification on Etherscan is enough evidence to show that the project is not a scam and it is safe for members.

Nexus Mutual has a detailed technical whitepaper. You may read it here.

Hugh Karp – The company is founded by Hugh Karp, insurance professional and Blockchain enthusiast since 2011.

Roxana Danila – Roxana Danila is the CTO, and she has over five years of experience in leading and building software products.

The board members include Nikita Arora, Reinis Melbardis, Graeme Thurgood, and Nick Munoz-McDonald, Kayleigh Petrie is the communications and engagement director. Over 22 years of experience in financial services, Steve Barker; the founder and CEO of SwapForex serve as the project advisor. Evan Van Ness, the founder of WeekInEthereum.com, is also an advisor.

The Native token (NXM) is purchased through their official website. Further, its wrapped version is listed on exchanges like Binance, Huobi, Uniswap, poloniex etc.

The team behind Nexus Mutual has a very rich community and followership across the meda. Among their social media followership include;

The Pros And Cons

The significant advantage of this project is the protection of people against smart contract vulnerabilities, and the members have the profits.

However, there is a downside to the project. The strict guidelines for members to access claims may prevent someone with an actual loss from accessing a claim. 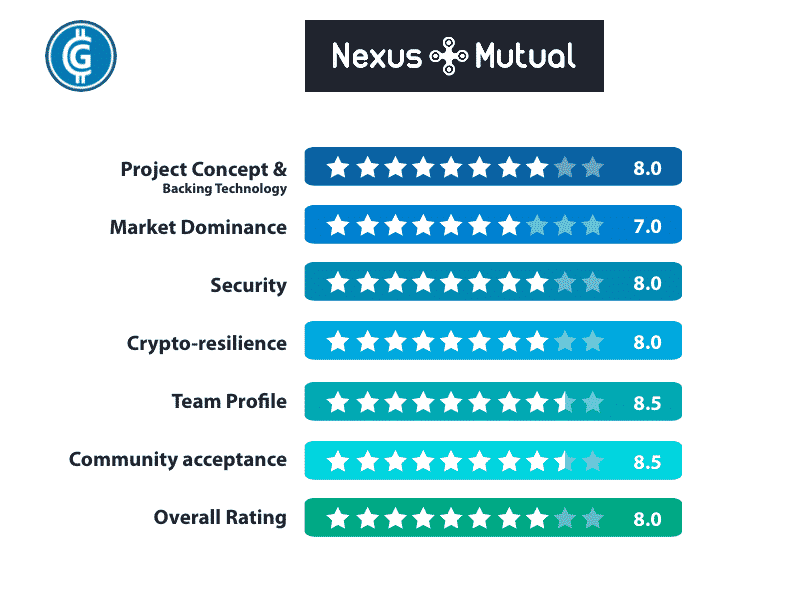 Our Opinion About The Project

The founders have carried out extensive internal testing and external audits to ensure there is no possibility of having a bug in the Nexus smart contract.

According to the team, the platform is not decentralized for the best interest of the users especially as a startup. However, they had a plan to decentralize with time.

No, you can use ETH, DIA to purchase cover. The system is designed to automatically convert the DIA or ETH for NXM to allow cover purchases.

The price of a smart contract cover is  driven by the amount of NXM staked by Risk Assessors against the specific contract.

There is no token generation event.

Purchasing cover is as simple as connecting your MetalMask wallet on the Nexus Mutual user interface https://nexusmutual.io.

We have a team of robust professionals who rate the DeFi projects in completely unbiased manner.

Want your ICO to be reviewed by Coingape? Let us know

Caution: Coingape publishes the project reviews only for the information purpose. It is not an invitation for investment. When making investment decisions, conduct your individual assessment and consult with an advisor.