Volkswagen has announced that it is working on real-world use cases where Bitcoin (BTC), Ethereum (ETH) and IOTA (MIOTA) will be utilized. The company and its subsidiaries are working on crypto and blockchain solutions, taking it mainstream.

According to the latest announcement by Volkswagen, the German automaker company has started work on blockchain and cryptosystems. Volkswagen Group would be using Bitcoin (BTC), Ethereum (ETH) and IOTA (MIOTA) and doing much more as put by Nicolai Bartkowiak of Volkswagen:

“We’re building our own blockchain solution, regardless of whether they’re based on IOTA, Ethereum, or other crypto technologies… We want to create added value for our customers. More security, more transparency, and partnership approaches to projects.” 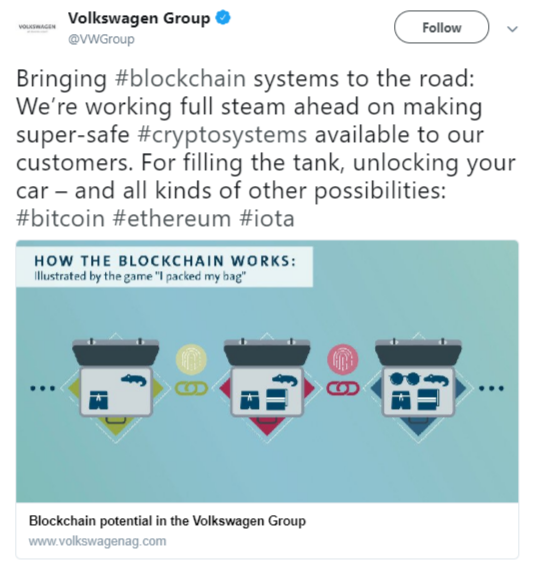 Talking about the blockchain, the official announcement on its website mentions, “Volkswagen AG is testing blockchain systems. This crypto technology offers enormous potential for maintenance, logistics, self-driving vehicles, and specialized solutions such as tamper-proof odometers.”

Moving on to the cryptocurrencies, the leading crypto Bitcoin holds a specific attention as it has been shared:

“(Bitcoin) is the most popular area of application for blockchain technology. Blockchain models cover a number of different approaches, all of which have one thing in common: they are very secure. Most of them have thus far been used for digital currency, such as Bitcoin, IOTA, and Ethereum. But this new technology is finding an ever greater number of applications.”

The IT department of the Volkswagen involving Benjamin Sinram and Nicolai Bartkowiak is working on the integration of the blockchain. The purpose for the same as shared by Sinram is “We want our customers to become familiar with blockchain systems.”

Blockchain applications have a lot of potential in Volkswagen Group from logistics, digital applications to maintenance and specialized solutions. As for the real world use cases, Bartkowiak explains:

“Blockchain technology also offers a lot of opportunities when it comes to self-driving vehicles. It can protect cars from hackers better than other technologies, and help with automatic payments at fueling stations or car washes.”

Volkswagen is not new to the world of cryptocurrencies as earlier this year, it partnered up with the world’s 10th largest cryptocurrency IOTA (MIOTA). Before this, the CDO of the automaker company joined the supervisory board of IOTA Foundation.

The company is currently working on three potential applications for distributed ledger technology (DLT). The first one a mileage clocking system that would restrict the manipulation of odometers. This will make the used car market more secure and transparent while ensuring no consumer data is saved on the blockchain network as explained by Sinram:

“Customers can save their odometer readings in a distributed ledger system at regular intervals. The data cannot be changed retroactively without somebody noticing that they’ve been manipulated.”

Porsche, one of the subsidiaries of Volkswagen is also developing a blockchain model that will protect cars from hackers. Oliver Doring, financial strategist at Porsche states, “We’re doing pioneering work here. We’re also testing how well a non-public distributed ledger system is suited for this.”

“Different providers have different terms and methods of payment, which can often make it complicated for customers to charge their electric vehicles. We want to make this easier and improve the customer experience with a new technology.”

Volkswagen is a big name with subsidiaries like Audi, Bentley, Bugatti, Lamborghini, Porsche, SEAT, Škoda, and Ducati, that will further take cryptocurrencies mainstream.