According to a press release from the CFTC, five entities associated with the owners of the trading platform have also been indicted for violating the Bank Secrecy Act.

BitMEX allows users to ‘Trade Bitcoin and other cryptocurrencies with up to 100x leverage.’ It is known to be the largest cryptocurrency derivatives platform with trading volume in billions of dollars. With BitMEX failing to register with the CFTC and complying with the rules set by it, thousand of users, including those in the United States, have jeopardized their funds.

The CFTC also urged users and traders to verify a trading platform’s authenticity and registration before handing over their funds.

According to CoinMetrics data, BitMEX has approximately $2 billion worth of Bitcoin in its vault. 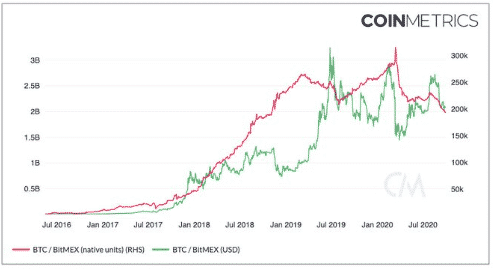 According to the complaint, the three owners of BitMEX were illegally offering commodity transactions, futures, options, and swaps on Bitcoin (BTC), Ethereum (ETH), And Litecoin (LTC). There were charged with operating a facility for trading without CFTC approval.

Additionally, they did not implement KYC or know-your-customer procedures, a customer information program, and anti-money laundering procedures, which is a requirement according to CFTC rules. BitMEX has been under CFTC’s radar since July last year, after which, the trading platform adopted a mandatory KYC policy only April this year.

“BitMEX has facilitated cryptocurrency derivatives transactions with an aggregate notional value of trillions of dollars, and has earned fees of more than over $1 billion since beginning operations in 2014.”

In support of digital assets playing a part in boosting the economy of the United States, CFTC chairman Heath P. Tarbert said, “For the United States to be a global leader in this space, it is imperative that we root out illegal activity like that alleged in this case.”

“We can’t allow bad actors that break the law to gain an advantage over exchanges that are doing the right thing by complying with our rules.”

Ensuring that such activities are pushed out, is important both in the derivatives market, for the economy as a whole and in the digital asset market.

“Effective anti-money laundering procedures are among the fundamental requirements of intermediaries in the derivatives markets, whether in traditional products or in the growing digital asset market. This action shows the CFTC will continue to work vigilantly to protect the integrity of these markets.”

Although the Bitcoin prices have seen slow and steady growth, following the announcement, Bitcoin saw a 1% drop, bringing it back to the $10500 zone. Other digital assets such as Ethereum, Polkadot, Bitcoin Cash, and XRP, among others, also experienced a vertical drop mimicking Bitcoin.

As reported by The Block, BitMEX’s spokesperson said that the platform intends to “defend the allegations vigorously,” adding that it has always complied with the regulations and laws set by the authorities.