As the DeFi tokens boom, the stablecoins have been the time of their own. Tether [USDT], the leader of the pack moved higher on the CoinMarketCap list and has been the market’s most dominant stablecoin.

Along with the growth witnessed in its market Cap, USDT has also been a part of many major blockchains like Ethereum, Tron, OmiseGo, and now there has been the latest addition of EOS.IO blockchain.

Third swap in a week

The Chief Technology Officer [CTO] of Bitfinex and Tether, Paolo Ardoino, on 5 September Bitfinex swapped 50 million USDT to EOS. This was third in the line of the swaps made to EOS. The first swap took place on 29 August wherein 10 million USDTs were swapped on EOS, followed by a 25 million swap on 4 September. 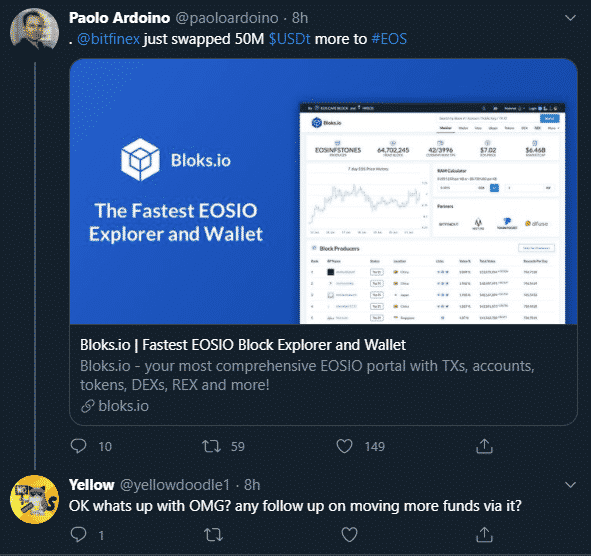 Twitter users questioned the CTO about the update following the move, but the CTO stated that Bitfinex has opened the path for everyone to use the stablecoin but “It’s now up to the $OMG community to get more projects using it.”

How will this impact prices?

The community began speculating the impact of these movements on the price, but Ardoino clarifies that these swaps were immediately absorbed by the EOS ecosystem and noted that there could be more swaps conducted depending on the use of the stablecoin.

Even though the community expected ripples in the market of BTC, which was already sinking, EOS was the asset to witness a tremendous surge as it on-boarded Tether. Reportedly, the digital asset jumped 26% on 4 September after the move, while most major cryptos were sinking in terms of value.

In late August, Tether also moved 3 million USDT to the OMG network owing to the congestions and scalability issues on the Ethereum blockchain. This is also when, according to CoinMarketCap data, OMG rallied 225% in 24 hours. In 24 hours, the token increased by 76% in value.

The OMG network is a layer 2 scaling solution designed to reduce the congestion problem on the Ethereum blockchain, however, ever since the move there has not been much happening on this layer.