IOTA has launched its Hub that will make integration of IOTA for exchanges and service providers easy and seamless. Also, one of the biggest exchanges of South Korea, Upbit is listing IOTA that has its prices on an upward shift while the majority of the coins remain in the red.

Today is a big day for the IOTA cryptocurrency as it marks two big developments. To start with, IOTA Hub is officially introduced that makes MIOTA listing on the exchange an easy and seamless process for trading platforms.

Another big announcement came into the form of listing on one of South Korea’s biggest exchanges Upbit.

According to Coinmarketcap, Upbit is at the 8th position while managing a daily trading volume of $230 million and currently having 270 markets. In its official announcement, Upbit mentions about MIOTA deposit event that involves payback of 100 percent transaction fee.

Today's listing of IOTA on UPbit is a testimonial of how the IOTA Hub simplifies and expedites the listing process significantly.

The world’s 9th largest cryptocurrency, IOTA is trading at $0.92 with a rise of 3.43 percent (at the time of writing) while running in the green in BTC market as well by about 4 percent. With a market cap of $2.5 billion, IOTA is one of the few coins that are in the green. 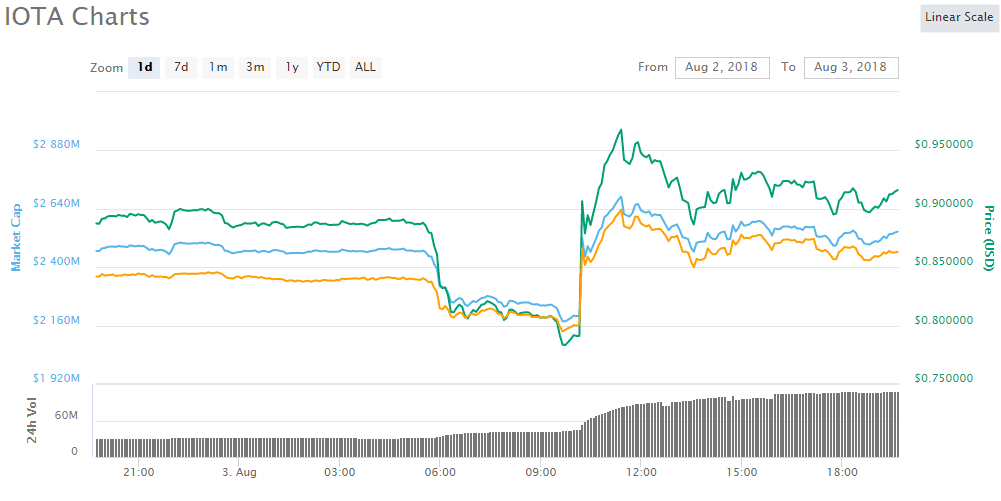 In its official blog, IOTA shared how the unique architecture of IOTA that involves DAG makes it more challenging for the exchange and other service providers to integrate IOTA in comparison to the traditional blockchain and cryptocurrencies.

A few of these challenges are seed management, reattachment, deposit address monitoring, confirmation monitoring and no double signing due to database constraint. However, today changes all this as IOTA Hub offers a “standardized, open-source solution to these issues using a simple gRPC API in a hardened and audited environment.”

Now, integration of IOTA has become simple for any kind of service provider. Instead of months, it would just take weeks as the exchanges only need to connect the Hub to their existing platforms.

Talking about his development, the team shared-

“Everyone at the IOTA Foundation is extremely excited to launch Hub and grateful to all of our partners that supported us on the journey. We are confident that more exchanges and service providers will begin supporting IOTA in the coming weeks and months, leveraging the simplicity of IOTA Hub.”

Another advantage of Hub is that it supports externally signed transactions that have access to the database but not to the salt. This will further increase the operational security as it would be “impossible for an attacker to gain complete control over the exchanges’ funds by compromising a single system.”

The open source code of Hub will be soon made available on GitHub so that other exchanges and services that wished to use IOTA can utilize it.