Litecoin Foundation, a nonprofit organization, announced that the LitePay CEO, Kenneth Asare informed of his decision to cease all its operations and sell the company a few days back. Litecoin creator Charlie Lee apologised for hyping this company whilst Litecoin traded about 10% lower after the announcement and is currently at $142.45.

LitePay shuts down after making big promises for Litecoin

LitePay, a payment processor that is Litecoin processor, announced that it is shutting down all its operations and is looking for a seller. In a post on the Litecoin Foundation, the abrupt termination of LitePay has been disclosed.

Launched in December 2017, LitePay reportedly started operating on February 1 that claimed to provide a crypto wallet along with a LitePay debit card which would allow the users to convert their Litecoin into USD, scheduled for the February release.

This earned the venture acclaims from the Litecoin foundation, praising with the tweet “Finally, someone is taking the opportunity to create litepay.us. Good job!”

The announcement of Litepay to launch a merchant processing system for the Litecoin on February 26 gave the price of Litecoin a boost at that time. However, on March 5, the company sent an email to the customers stating that it is still checking the prospective merchants and hence, holding off the card registrations. After giving the reasons “negative perception and drastic actions card issuers have towards cryptocurrency companies”, for card registration halt, the company didn’t provide any further details. 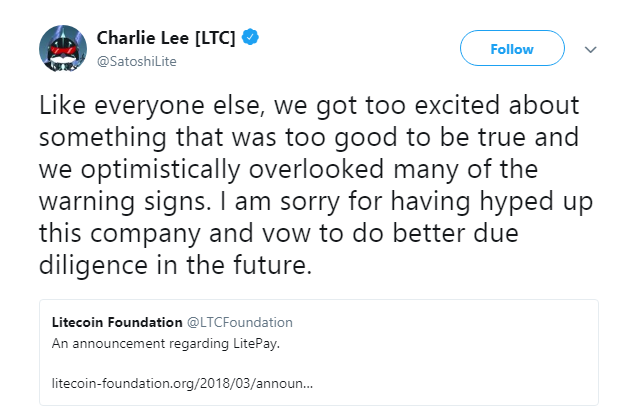 In response to this LitePay debacle, the Litecoin foundation, a non-profit that advances Litecoin and is an investor in LitePay did a press release, pointing out that it is abandoning LitePay:

“It was at this time that Kenneth asked the foundation for more funds to continue operations. The foundation refused any further funding as he was unable to provide a satisfactory picture of where the money had been spent and refused to go into exact details about the company and show objective evidence to back up his statements.”

Charlie Lee, the creator of Litecoin also expressed his regret on supporting the LitePay:

“Like everyone else, we got too excited about something that was too good to be true and we optimistically overlooked many of the warning signs. I am sorry for having hyped up this company and vow to do better due diligence in the future.”

The news of LitePay shut down resulted in the Litecoin (LTC) price fall. As per coinmarketcap, the cryptocurrency is currently riding at $142.45 with a drop down of 11.15 percent.

What are your views on the abrupt shutdown of  LitePay? Do you think it will affect the prices of  Litecoin severely? Share your thoughts with us!

Binance Partners With TikTok Star Khaby Lame
Anjali Tyagi
195 Articles
Having a background in writing, I worked on a wide array of industry topics and have recently entered the world of Blockchain and Cryptocurrency.