EOS is working on improving the performance of its network considerably as it releases a new version that is seeing a 35% increase in transaction speed and enhanced tooling for improving the smart contract development.

“EOS is doing what it promised to do,” Alisa Gus from WISHKNISH recently said in part about EOS.

There has been ongoing developments to improve the performance of the EOSIO in order to make it the fastest protocols on the market. The major focus in the version EOSIO V1.6.0 has been on the substantial increase in performance for applications of the software.

These new updates will increase the efficiency of real-time transaction throughput and peer-to-peer networking layer that would ultimately enhance the overall transaction speed. The official announcement reads,

“Our own internal benchmark tests show upwards of a 35% increase in likely transaction speed when using token-transfers-per-second as our base case.”

This benchmark involved testing the new versions on a private network with results showing “noticeable improvements to sustainable transactions per second, reduced CPU costs, and lower latency on all EOSIO based blockchains.”

Moreover, the EOSIO.CDT V1.5.0 is enhanced tooling for Smart Contract Development. This new tooling is aimed at improving the simplicity of creating, developing, and testing EOSIO smart contract development.

Meanwhile, Tron is working on beating EOS and Ethereum at the Dapp game as it continuously adds Dapps on its network at a fast pace.

On the price front, EOS is currently trading at $2.38 with close to 1 percent gains in the past 24-hours. However, the fifth largest cryptocurrency is expected to see a growth of over 75 percent at $4.68 by year-end as per Finder’s prediction.

“EOS has a bright future ahead. However, it may be another year or two before it starts to fully gather adoption,” stated one of the panelists, Ben Ritchie from Digital Capital Management. 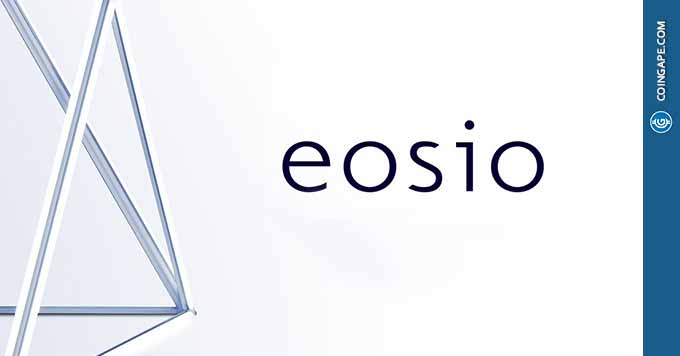 Coingape is committed to following the highest standards of journalism, and therefore, it abides by a strict editorial policy. While CoinGape takes all the measures to ensure that the facts presented in its news articles are accurate.
Disclaimer The views, opinions, positions or strategies expressed by the authors and those providing comments are theirs alone, and do not necessarily reflect the views, opinions, positions or strategies of CoinGape. Do your market research before investing in cryptocurrencies. The author or publication does not hold any responsibility for your personal financial loss.
Instant loans by local bank transfer using your crypto as collateral
Share on Facebook
Share on Twitter
Share on Linkedin
Share on Telegram
Author: Achal Arya

I am an entrepreneur and a writer with a bachelors degree in Computer Science. I manage the blockchain technology and crypto coverages at Coingape. follow me on Twitter at @arya_achal or reach out to me at achal[at]coingape.com.

I am an entrepreneur and a writer with a bachelors degree in Computer Science. I manage the blockchain technology and crypto coverages at Coingape. follow me on Twitter at @arya_achal or reach out to me at achal[at]coingape.com.