A lot of mainstream tech companies are slowly opening doors to blockchain technology. A lot of them are seeking partners and finding them in companies whose token are already established will some are planning to develop their own. But a few have only been able to take it beyond some meetups and study groups. Well, that’s not Facebook. According to recent reports and LinkedIn pages, Facebook is getting its team in place that can work on the blockchain.

In May, Facebook had announced that it is creating a small group of employees to explore how blockchain technologies can be advantageous for the social media giant. This group was to be headed by David Marcus, the man who was at the helm of Messenger for four years. Following the announcement David Marcus, via a Facebook post had mentioned that he would be “starting from scratch” in these efforts surrounding blockchain tech. Looks like the team has done enough progress in past 2 months and now there are a few new additions.

Verifying my Blockstack ID is secured with the address 1CrF8iUgoT3tF5wUoWsZManNMtUo7gSvsr https://t.co/lRtAycz9OR

advertisement
Find Next Crypto Gem on KuCoin! Sign up to Claim $500 Welcome Bonus.
Evan Cheng, a director of engineering at Facebook, has moved to the position of Director of Engineering, Blockchain. A well-respected “low level” computer engineer, he was previously responsible for heading up Programming Languages & Runtimes at the company.

Also, read: Facebook’s U-turn on its Ban on CryptocurrencyAds

About Evan Cheng, the new designate at the helm of Facebook’s Blockchain endeavors

If we look at Evan Cheng’s social media, his credentials and interests definitely show why he is the right candidate for a job that he has been allotted by Facebook. Change describes himself as an engineer and a technical leader. Prior to his position as Director of Blockchain, he was Director of programming languages, runtimes, and compilers at Facebook, a position he held for almost 3 years. 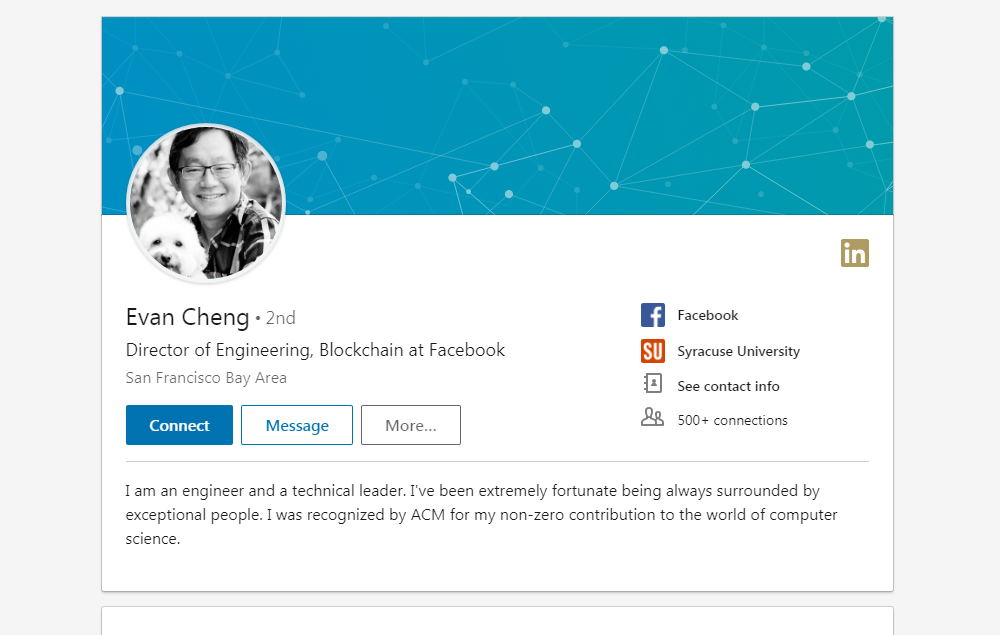 Prior to Facebook he had spent 10 years at Apple Inc starting at a position of Senior Compliance Engineer responsible for LLVM technical lead moving vertically to become Senior Manager, Low-Level Tools where he used to oversee efforts in static and runtime compilation for both CPUs and GPUs, Swift performance, static and dynamic linker, shared cache optimizations, debugger, bit code tooling and Bootstrapping new “engineering effectiveness” initiative.

A Ph.D. dropout, Chang completed his MS in Computer Science from Syracuse University and his BS Computer Science and Math from Marietta College. Definitely, a strong candidate to lead the path.

His twitter handle (TheBeet1) description also mentions his Night Job as “blockchain, crypto” and he is often seen posting a lot on the blockchain. If some reports are to be believed he is also an advisor to a number of blockchain startups/projects, including Zilliqa and ChainLink.

Meanwhile, Marcus and Cheng aren’t the only Facebook execs to be have been tasked with building out the social network’s growing blockchain project. In a recent executive reshuffle, Instagram’s former VP of Product Kevin Weil has taken up the position of VP of Product, Blockchain at Facebook.

This reshuffle definitely does give a peep that something big is in the making at Facebook with respect to Blockchain. Only time will tell what it is but surely a great news for crypto enthusiasts.

Will Facebook be able to deliver something path-breaking with its endeavors with blockchain? Do let us know your views on the same.