The Initial Coin Offering (ICO) market is not only hyped but also growing in billions. The latest atypical ICO to make an entry into the crypto market is Rally. With an idea to transform the content sharing marketplace, Rally is here to reward the users for what they already do every day and incentivizing the advertisers with expanded reach, lower cost, and increased loyalty. Let’s jump into our Rally ICO Review and know all its worth!

Rally: A content sharing marketplace to engage Your community

Rally is an existing marketplace that is allowing the advertisers to reward the users for doing what they are already doing every day i.e. joining a community or sharing content. The content could be shared through any medium, be it text, email, social or chat.

“Rally is dedicated to attributing fair value to content sharing, putting power back in the individuals hands and rewarding them.”

Moreover, they are focusing on revitalizing the powerful traditional word of mouth marketing formula by combining it with the coming age blockchain technology. A great incentive is having no limit on the number of tokens that can be earned by a user for joining, engaging, and referring ad community royalties.

Rally provides clear information through its to-the-point whitepaper. With a simple and concise content along with no technical jargon, this document also caters to a layman.

The company already has a social platform that is available for the users to download on App Store and Google Play. Because of the reason that this project is not selling its tokens rather taking the route of airdrop to distribute the tokens, there is no requirement of information on crowdsale funds wallet.

The team of Rally according to its website involves 9 members. The team primarily consists of advisors along with the Blockchain Architect, Regulatory Affairs, and Business Development Executive apart from the President and founder. 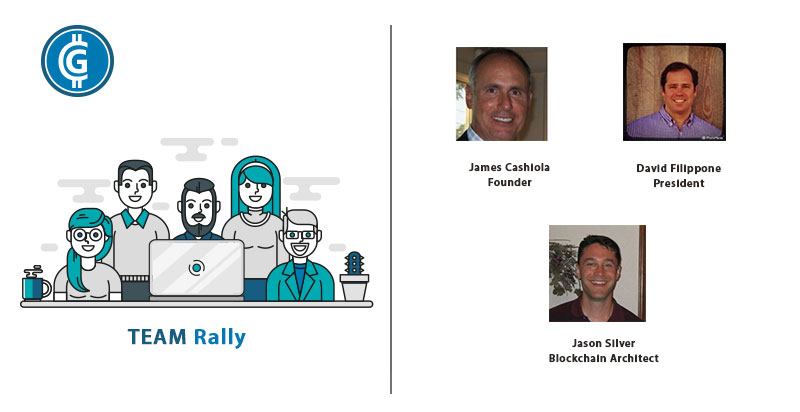 James Cashiola– Founder: The attached profile explains the Cashiola’s over 30 years of experience in software design and development. Graduated from the University of Southern California, he has founded multiple startups and acquired software patents as well.

David Filippone– President: With over 20 years of experience in media and finance, Filippone has worked with a number of big names while processing deep knowledge in various areas viz. M&A, finance, business strategy, and online marketing.

Jason Silver– Blockchain Architect: Jason has experience of more than 20 years in the field of technology. He has also developed and sold a technology marketplace to Overstock.com while leading their automotive technology platform. Having a degree in Electrical Engineering, he has patents pending using blockchain in the automotive space. 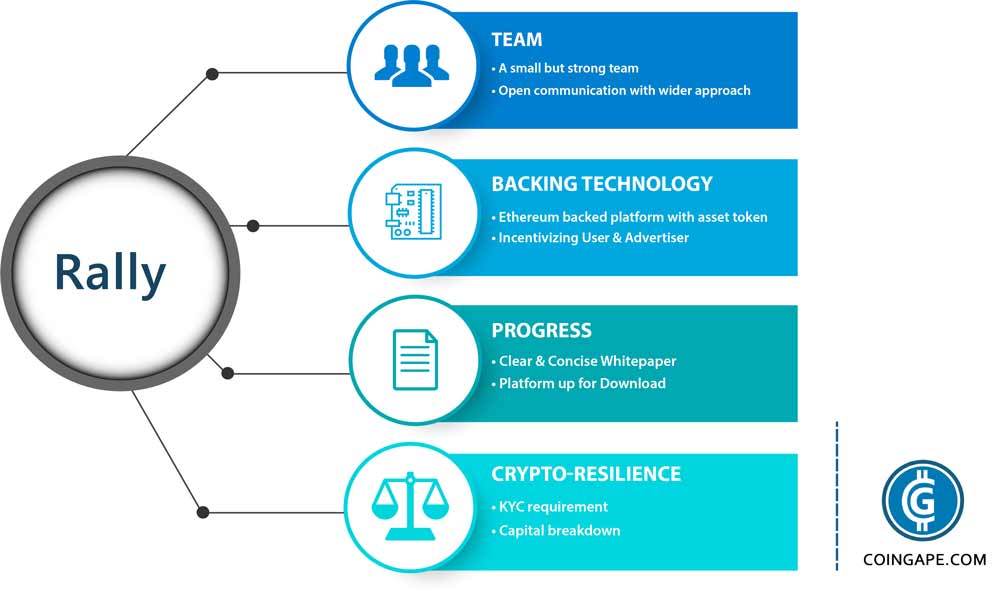 The Rally Token (RALLY) is the platform’s incentive currency whose value is driven by both the number of users and advertisers and how engaged they are in the marketplace.

Advertisers use these tokens as part of their offers that can be acquired back by offering goods and services to them.

For the users, the tokens can be earned through a number of ways:

As for how these tokens can be used:

Rally uses the popular ICO platform Ethereum blockchain to build its platform. The reason for going the blockchain route is “to realize the full potential of the content sharing economy, and the requirements of transparency, security, incentives, and attribution.”

Incorporate in Puerto Rico, the company has 4 advisors with Sir Kenneth Olisa, OBE being the most prominent one. He is currently the Deputy Chairman of The Institute of Directors and Chairman of Interswitch (Africa’s largest e-payments company) and is a former Director of Thomson Reuters and Eurasian Natural Resources Corporation (ENRC).

The company website provides a clear picture of the distribution of Rally tokens that “will be issued as an incentive for users to join, get authenticated, refer new users and engage with offers from advertisers.”

Out of the total supply of 5,000,000,000 RALLY tokens, the majority of the tokens i.e. 40 percent will go to airdrop rewards where tokens are allocated to individuals for joining Rally and inviting others to join. 35% will go to advertisers in order to incent the Rally community to take action and be rewarded.

Company Reserve for the business development purpose gets 10 percent of the tokens while 7 percent goes to Community Managers that manage channels, curate content, and community support. Only 3 percent is allotted to advisors who are the third parties supporting the Rally airdrop. The remaining 5 percent is for Bounty Program, to grant to the users that promote the Rally Airdrop with content creation and sharing.

For the security purpose, the Rally platform has chosen blockchain, especially Ethereum. Moreover, it has further boosted through a bug bounty program, “which requires significant technical expertise”. 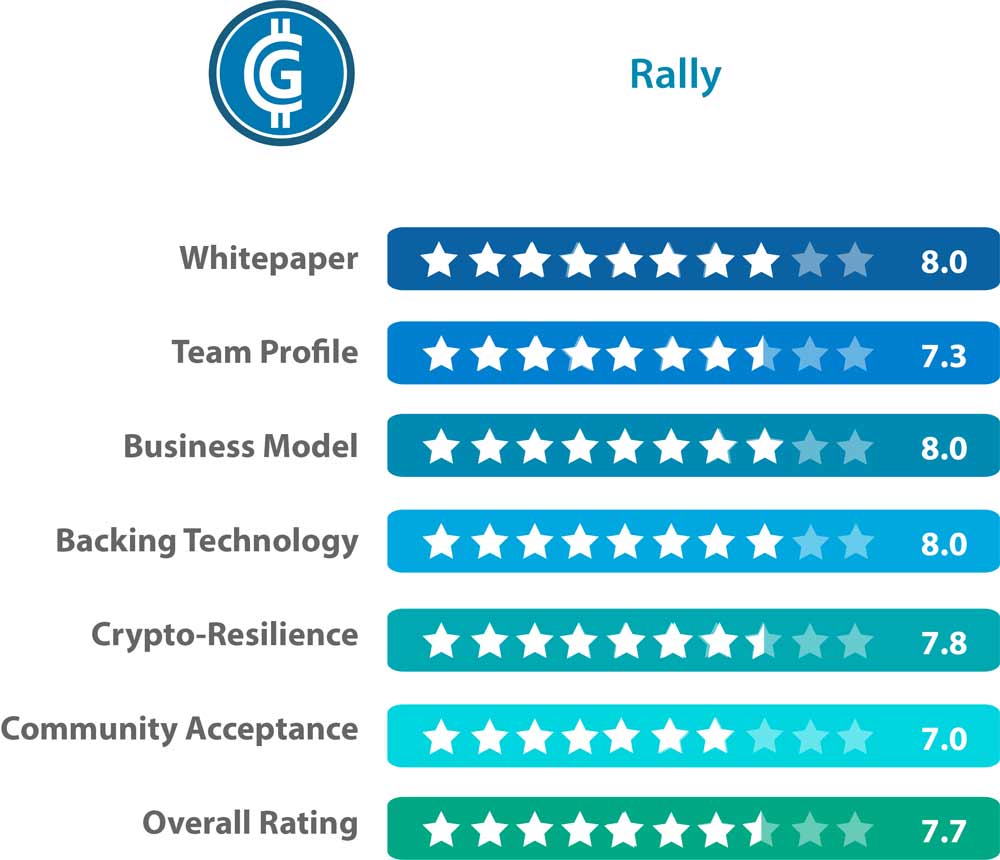 The team is enthusiastic about their project as it provides development information to its investors. Though the company is not on the slack and mailing list, it offers a good reach to its potential investors via LinkedIn, Telegram, Facebook, Twitter, Medium, and Bitcointalk.

The idea to incentivize both the user and the advertiser by offering multiple benefits in the form of no limit on acquiring the number of tokens, various ways to earn and use the tokens while providing low advertising cost and wide reach to the advertisers has a lot of potentials.

Though the team lacks numbers, Rally has included the right mix of talent by having experienced blockchain architect, regulatory affairs, and advisors. Moreover, the airdrop to distribute the RALLY tokens is a smart move while already having a platform in place.

We have a team of robust professionals who rate the ICO projects in completely unbiased manner.