The extreme volatility in the cryptocurrency market caused a wavelike motion in the Bitcoin [BTC] market. BTC was cruising at its annual peak of $12.473 on 17 August and the selling pressure seeped in, causing the price to descend from this peak. However, on 2 and 3 September BTC market saw massive liquidations of longs as the price reached $9,987.86. This was the first time in seven weeks, BTC slipped under the $10k mark, but many traders expected for this to happen.

The high volatility has given rise to high liquidation in the BTC market. According to data provider Skew, BitMEX witnessed total hourly liquidations of $276 million within the past three days. Out of the total liquidations, $261 million were sell-liquidations, whereas the remaining $15 million accounted for buy liquidations. However, there has been higher liquidation that has taken place in the market like in July 2019.

BTC continued devaluating on September 4 too, as approximately $75 million longs were liquidated within a single hour on BitMEX.

Interest decreases as the market shrinks

The selling pressure also resulted in the overall open interest to collapse from an ATH of $5.689 billion to $$3.602 billion within a month. 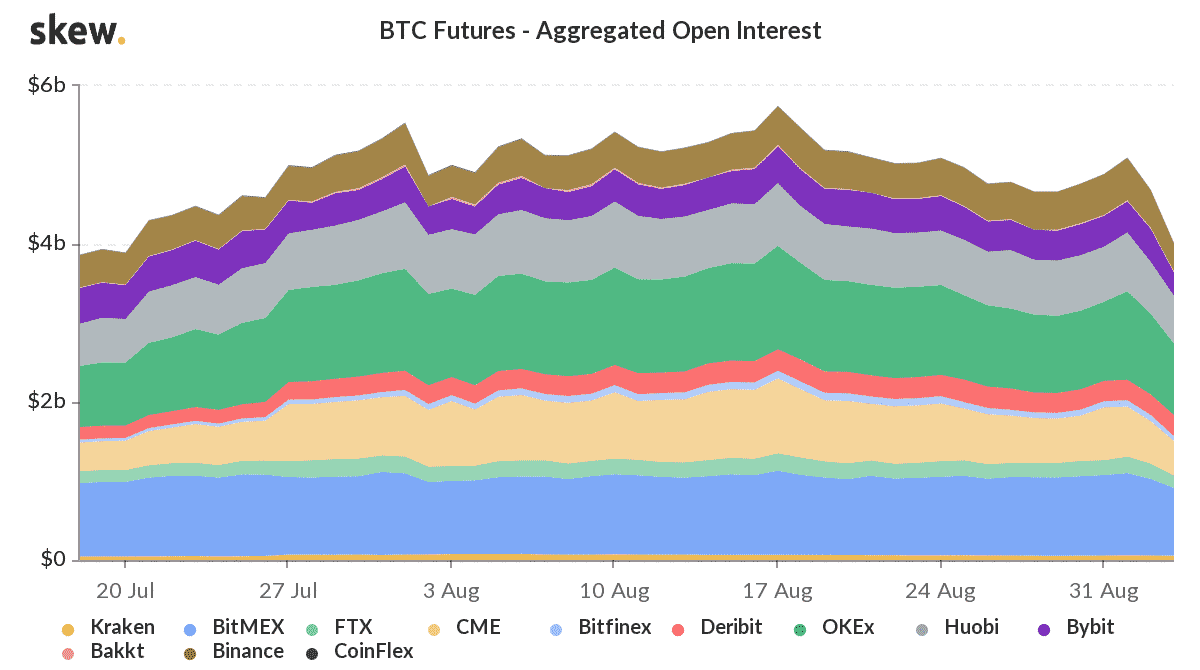 As the sell-offs escalated on 3 September, BitMEX’s XBTUSD open interest also shrunk rapidly from $780.94 million to $622.01 million. However, despite losing interest in the market, 3 September was the most active session of the month for Bitcoin. According to Skew, BTC spot crossed $1 billion in total, while Coinbase did $327 million and was closely followed by LMAX Digital with $294 million.

Although the largest crypto asset has suffered a great dent in its value over the past couple of days, the traders were expecting the price to fill the trading gap on the Chicago Mercantil Exchange [CME]. Historically, this gap has been filled with the price sooner-or-later retracing back to the gap. At press time, Bitcoin was being traded at $10.218 with a market cap of $191.43 billion.