Yes, the market is bullish now, and there is no doubt about it. This came after a devastating plunge of most Cryptocurrencies in the market that plagued the mind of most lovers with negativity. While some who are newbies thought the market will never return to its early point as of May, others are of the opinion that sooner or later, they will reap the fruit of their investment in Cryptocurrencies through bullishness.

The market has been up since last week, and the table is almost green with most coins gaining value. Amongst the coins in the market today on the top ten table, EOS (EOS), Cardano (ADA), and IOTA (IOTA) seem to be the top gainers in the last 24hrs according to Coinranking. In the last 7 days, the altcoin gained 8.83% to its value, while the last 30 days of the Cryptocurrency was featured with 10.92% value drop.

Even though EOS has just launched its mainnet, moving its token away from an ERC20 ecosystem where it was previously housed, the altcoin is still doing beautifully well in the market ahead of other coins. A performance contrary to the opinion of some observers –that the altcoin will face series of turbulence after migrating. In the last 24hrs, EOS displayed an outstanding performance among it contemporary with 1.93% addition to its price. Earlier, EOS was valued $8.58 and now the present value of the said “most powerful infrastructure for decentralized applications” Cryptocurrency is $9.06, after attaining a high price of $9.36

Lastly, IOTA, the Cryptocurrency with a blockchain technology that has displayed much proficiency in real-world use cases, seem to be the highest gainer in the top ten market table today according to the last 24hrs price index. 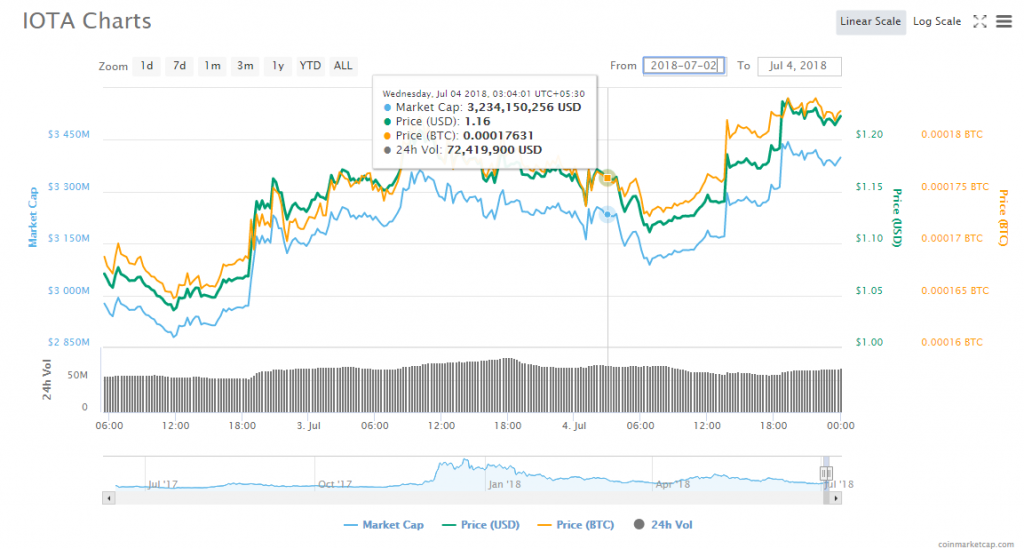 advertisement
✓ Share:
Disclaimer
The presented content may include the personal opinion of the author and is subject to market condition. Do your market research before investing in cryptocurrencies. The author or the publication does not hold any responsibility for your personal financial loss.
About Author
Lawal Khalid ABIOLA
Lawal Khalid Abiola is a creative writer, entrepreneur and innovation lover. Lawal Khalid Abiola is an avid lover of Cryptocurrency.