Bitcoin mining difficulty has been lowered by 1.27% to 21.45 T for the first time in 2021 amid the Chinese crackdown on crypto mining farms in inner Mongolian regions. The Chinese province has drafted a bill to shut down all crypto mining operations and other high energy-consuming industrial activities regions as it failed to meet the carbon emission goals set by the government. Mongolia is considered the third most prominent Chinese province for Bitcoin mining. 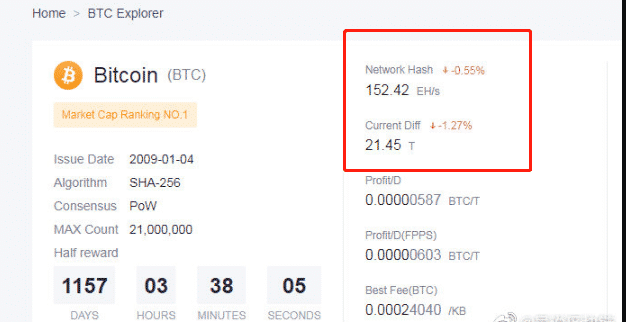 The lowering of mining difficulty also comes after four consecutive increments and a fluctuation of 1% is considered normal. It is also believed that the competition among miners was higher at a lower Bitcoin price given the pressure to make a profit is high, on the other hand as Bitcoin price topped $58,000 to register a new ATH almost 3X it’s 2017 high, the completion relaxed given miners were making a profit at a lower investment.

In the wake of the Chinese Bitcoin mining crackdown, many other nations including the US, Iran, and Kazakhstan are looking to offer a better-regulated environment for crypto mining to lure the outflow of miners from China to their respective countries.

Bitcoin price is currently trying to get past the immediate resistance of $52,000 having spent most of its last week under $50K. The top cryptocurrency rose to a new ATH of $58,348 in early February and registered a sharp price correction of nearly 20% soon after, since then the top cryptocurrency is consolidating under $50K forming strong support at $45K.

The on-chain metrics look quite strong indicating the top cryptocurrency is far from its top as Exchange outflows and whale accumulation continues. Institutions especially MicroStrategy seem to be on a mission to buy as many bitcoin dips as they can as the software giant made their fourth treasury cash purchase worth $10 million taking their total Bitcoin investment to $2.16 billion with over 91,000 Bitcoin under their belt.