After climbing to the $7,300 and surging about 9% in just a week, Bitcoin price is slightly down but maintaining steady momentum. Meanwhile, Bitcoin shorts rises significantly that just might turn out be a driving factor to take bitcoin price higher.

Bitcoin price is maintaining a steady rise for the past week as it rises over 8 percent. A week back, Bitcoin has been at $6,749 and through its continuous upward movement, it reached the highest of this week at $7,350 yesterday. In a matter of a week, Bitcoin has risen approximately 9 percent as seen in the below 7-days Bitcoin price chart, 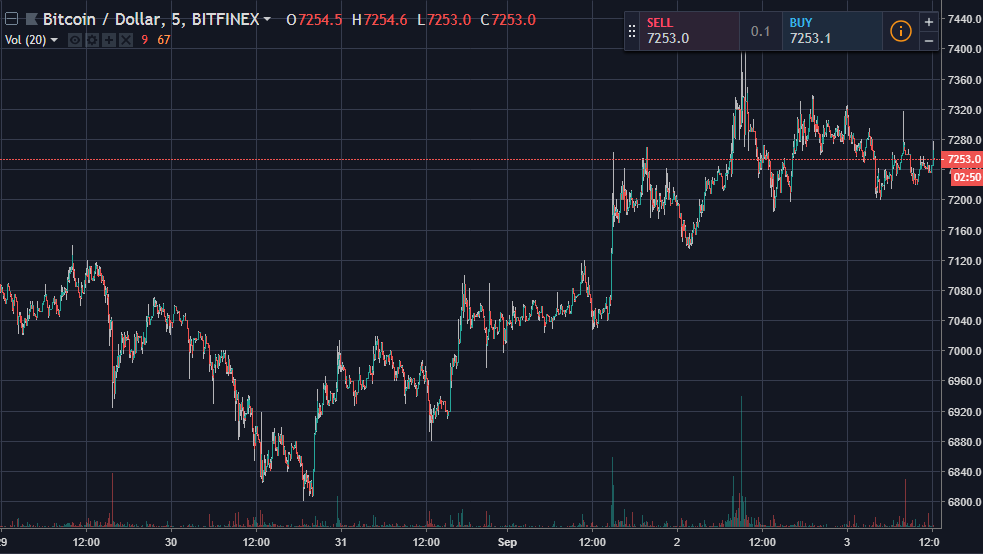 At the time of writing, Bitcoin has been riding at $7,235, down by about 0.90 percent in the past 24-hours. Today’s highest point has been $7,324 while $7,200 has been the lowest which shows a stable and modest momentum. This momentum, if maintained, can easily take Bitcoin price to $8k by next week.

As for if this price rise will continue, crypto enthusiast and technical analyst, CryptoYoda shared Bitcoin price movement chart:

something to work with $BTC pic.twitter.com/gKer0HSgid

In the meanwhile, after a substantial jump on the weekend, altcoins are now not faring well as a majority of them are in red between the range of 2 and 7 percent. This has the BTC dominance again hit 53.1 percent.

Bitcoin shorts pilling up high, could take Bitcoin even higher

During the weekend, Saturday shows the bitcoin short position of 10,000. The shorts keep on rising and hitting a new high. On Sunday, this further rose to ₿12,000 in a few hours.

At the end of last month, just before the weekend i.e. August 31, Bitcoin futures closed for the August month. While the new futures contracts for September month opened yesterday.

There is no clarity on why the shorts have been spiking so considerably. It could be one trader or a number of traders or maybe the Wall Street in play.

However, the possibility is as bitcoin nears the resistance line, traders are anticipating a dump. Though it remains to be seen if these shorts will win, this can turn out to be in favor of bitcoin price as well. As traders close short positions meaning buy bitcoin, the price can also take a hike.

If this happened that bitcoin price gets pushed higher, it won’t be the first time as it has occurred in the past as well.

The bets against Bitcoin price might be going higher and higher but according to Danny Kim, the head of growth at SFOX,

“As this trend continues, the stabilizing effects of institutional investment will extend beyond price spreads, and on to price fluctuations.”

With the way things are going, short-term rise seems to be in the picture but it’s to see if we can hit $8k this week.

Coinbase Announces Partnership With American Basketball Teams.
Facebook Twitter LinkedIn Xing
Sagar Saxena
119 Articles
Passionate about Blockchain and has been researching and writing about the Blockchain technology for over a year now. Also holds expertise in digital marketing. follow me on twitter at @sagar2803 or reach out to him at sagar[at]coingape.com