Wallets are an important part of the crypto ecosystem as they are the ones that hold all keys be it private or public held by the investors. Because of which they are often the targets to hackers and attackers. Hence the investor community is always looking for options which are secure and keep their tokens and coins safe. Being such an important aspect, it is necessary for one to understand what are the options available and which is best suited for them.

What are Cryptocurrency Wallets?

By formal definition, a cryptocurrency wallet is a software program that keeps private and public keys and connects with other blockchains to help users to send and receive digital currency and check their balance. If a user wants to receive or send Bitcoin or any other cryptocurrency, he will need to have a digital wallet to perform this transaction.

There are more than a million people who use cryptocurrency wallets on a daily basis, but there is still a major knowledge gap which creates multiple misunderstandings about how these wallets work. Unlike old-style ‘pocket’ wallets, digital wallets don’t store currency. In fact, currencies are not stored anywhere in any single location or exist anywhere in any physical form. All that exists are records of transactions stored on the blockchain.

How Wallets Transfers the Cryptocurrency

When a person sends bitcoins or any other type of digital currency to another person, he is essentially moving off his ownership of the coins to the other person’s wallet address. For the recipient user, to be able to receive these coins and unlock the funds, the private key stored in the user’s wallet must match the public address the currency is assigned to. If public and private keys match, the balance in the recipient digital wallet increases, and decreases from the sender’s wallet accordingly. Unlike in today’s traditional world, there is no actual exchange of real coins. The transaction is signified merely by a transaction record on the blockchain and a change in balance in the senders and receivers cryptocurrency wallet.

There are several types of wallets that provide different ways to store and access your digital currency. Broadly classifying, cryptocurrency wallets can be broken down into three distinct categories – software, hardware, and paper. Software wallets are further divided into the desktop, mobile or online.

These are wallets which are downloaded and installed by the users on one’s PC or laptop. These wallets are only accessible from the single computer in which they are downloaded and installed. Having single point access, desktop wallets are considered to be offering one of the highest levels of security however if the computer that the wallets reside in, is hacked or is attacked by a virus there is the possibility that the user may lose all your funds.

Online wallets usually run on the cloud and provide access to the user from any computing device and from any location. While they are more convenient to access, online wallets store your private keys online and are controlled by a third party which makes them more vulnerable to hacking attacks and theft. The clear positives of the online wallet are that it is ideal for holding small amounts of cryptocurrency as it provides easier access with quick transactional time, while on the downside these wallets are the most susceptible to hacking and theft with a high risk of malware.

These wallets are basically apps which run on the user’s phone. These wallets give the required agility to users because they can be carried anywhere and everywhere allowing the users to it at any point of sale including retail stores. Mobile wallets are usually much smaller and have simpler functionalities than desktop wallets because of the limited space available on mobile. The best about these mobile wallets is that it is the best for day-to-day transactions because they are easier to use on the go. Also, a lot of these apps come with QR code scanning facility which makes paying in cryptocurrency more swift.

These wallets are easy to use and provide a very high level of security. Basically, considered as a bridge between the tradition paper feet and digital crypto. While the term paper wallet can simply refer to a physical copy or printout of your public and private keys, it can also refer to a piece of software that is used to securely generate a pair of keys which are then printed. Using a paper wallet is relatively straightforward. Transferring Bitcoin or any other currency to a paper wallet is accomplished by the transfer of funds from the software wallet to the public address shown on the paper wallet.

Alternatively, if one wants to withdraw or spend currency, all they need to do is to transfer funds from their paper wallet to the software wallet. This process is called as ‘sweeping,’ and is carried out by either manually entering one’s private keys or by scanning the QR code on the paper wallet. The advantages of a paper wallet are the level control it provides the user since it is not stored on any device. Also, it becomes nearly impossible to digital hack into them. While the security is utmost, on the downside some investors think that it is quite cumbersome to move digital currencies around with paper wallet.

Hardware wallets store a user’s private keys on a hardware device like a USB. Although hardware wallets make transactions online just like the software wallets, they are stored offline which provides the much-required increased security. Hardware wallets are usually compatible with several web interfaces and also support a different variety of coins and currencies; it just depends on which one the user decides to use. What’s more, making a transaction is easy. Users simply plug in their device to any internet-enabled computer or device, enter a pin, send currency and confirm. Hardware wallets make it possible to easily transact while also keeping your money offline and away from the danger of hackers and digital thief’s. The positives for hardware wallet offers more security than all the other types of wallets. Apart from security, these wallets are portable devices that can easily be folded and carried. Most hardware wallets support a variety of coins. The only drawback with these wallets is that the user may need some technical know-how to use it easily.

As hardware wallets provide the most comprehensive solution for users, one needs to see the options available in the market. 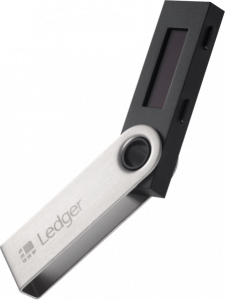 The Ledger Nano S supports over 25 cryptocurrencies, including Bitcoin, Ethereum, Ripple, and Altcoins, allowing the user to manage multiple assets with the same hardware wallet. The private key in Ledger Nano S is never exposed. It is protected within a secure chip locked by a PIN code, the same chip as the one used for passports and credit cards.

The device is simple and is controlled by only 2 buttons, and all actions can be verified on its screen. And the Ledger companion apps enable users to easily manage their crypto transactions.

The Ledger Nano S is based on a dual chip architecture (ST31 CC EAL5+, STM32) and the firmware integrity is secured by cryptographic attestation. The secure chip checks the integrity of your device each time it’s powered on making it an anti-tampering sticker to protect your device.

Just like other ledger wallets, Ledger Nano S is also powered by BOLOS, a unique, proprietary operating system developed by Ledger. This system creates an individual shield around each app on the Ledger wallet to protect them against applications attackers. 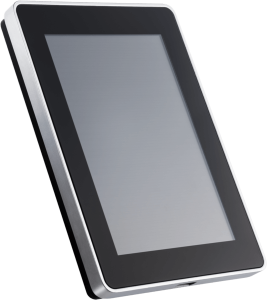 Ledger Blue is a premium hardware wallet with an advanced user experience thanks to a large touchscreen interface. It is built around a Secure Element and includes all the security features a user expect from a Ledger device.

The Ledger Blue supports over 30 cryptocurrencies, including Bitcoin, Ethereum, XRP, and Altcoins, allowing you to manage up to 11 assets simultaneously with the same hardware wallet. This hardware wallet embeds a color display and a large capacitive touchscreen with anti-scratch glass, encased in a robust cover.

Just like Nano S, Ledger Blue to is designed around a robust secure chip, built to withstand sophisticated attacks: your private keys are safely isolated inside the device. 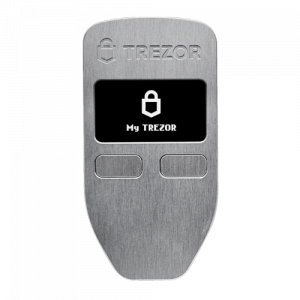 Trezor one is pressure tested hardware wallet that supports a wide variety of cryptocurrencies at an affordable price. The company behind the TREZOR One (Satoshi Labs) is considered a pioneer in the Bitcoin industry and that really comes out in the product. Additional security measures such as PIN codes and passphrases make this hardware wallet as close to “hack proof” as you can get. 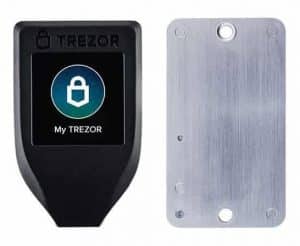 The Trezor’s model T comes with a stylish black finish with a nice sized 240 x 240 LCD. Through the LCD, the user can manipulate and configure the wallet as needed. The sleek design of the Model T makes it more appealing than its counterpart as it gives off a finished and refined vibe. Additionally, the touchscreen available with the Model T creates another layer of security.

Just like Trezor One, Trezor T too can handle over 500 cryptocurrencies, which include Bitcoin, Ethereum, Litecoin, Dash, Zcash, and many others. 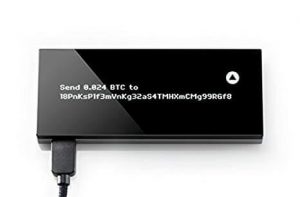 KeepKey was founded by Darin Stanchfield in 2015 and is headquartered in the US. KeepKey acquired the Bitcoin wallet Multibit in 2016 and was later acquired itself by Shapeshift on August 2017. The company is headed by Darin as the CEO and Ken Hodler (yes, Hodler is his actual name) as the CTO.

While the wallet claims to be the most sophisticated in terms of security it falls short of its competitors in terms of currency support. KeepKey only supports 40 different digital assets.

The main supported coins are Bitcoin, Bitcoin Cash, Bitcoin Gold, DASH, Dogecoin, Ethereum, Litecoin. The other features that make Keepkey special are that it gives the user PIN protection against unauthorized use, Additional passphrase protection, Customizable transaction speeds, and Limitless wallet addresses on one device. Also being backed Shapeshift, the hardware wallet has a bit of added credibility.

Archos is a French company whose main focus so far has been on the production of tablets, phones, Android devices, and portable data storage devices. With the rising demand for cryptos, the company entered the crypto space with its hardware wallet branded as Archos SafeT. It works like a typical hardware cold storage wallet which lets its users store their cryptocurrency in a safe, offline way.

The contents of this read-only memory can only be erased and reprogrammed using a pulsed voltage. Archos Safe-T Mini supports a decent amount of market cryptocurrencies. Bitcoin (BTC), Bitcoin Cash (BCH), Bitcoin Gold (BTG), Litecoin (LTC), Dash (DSH), Ethereum (ETH), Ethereum Classic (ETC) and a wide array of ERC-20 tokens can currently be stored on the wallet. While there are several major cryptocurrencies that the wallet doesn’t support, the project has claimed they are looking into expanding their storage offer.