According to the Glassdoor research, jobs in bitcoin, crypto, and blockchain space is seeing a 300 percent year-over-year increase. New York and San Francisco in the US while London, Singapore and Hong Kong across the world are seeing the highest growth along with a big jump in salaries.

Well, Bitcoin prices might not be seeing much action but Bitcoin jobs are surely outpacing the crypto prices.

According to the data provided by the research of the job site Glassdoor, a year-over-year increase of 300% in the number of jobs related to Bitcoin, cryptos, and blockchain has been seen. The growing demand for talent in the US saw a record 1,775 opened positions as of of August, 2018 in comparison to 693 at the beginning of the year and 446 similar job listings last year.

The research states, “As Bitcoin has captured the public interest over the past year, companies have rapidly invested in hiring for roles related to Bitcoin and blockchain, even in the face of regulatory uncertainty and price volatility.” 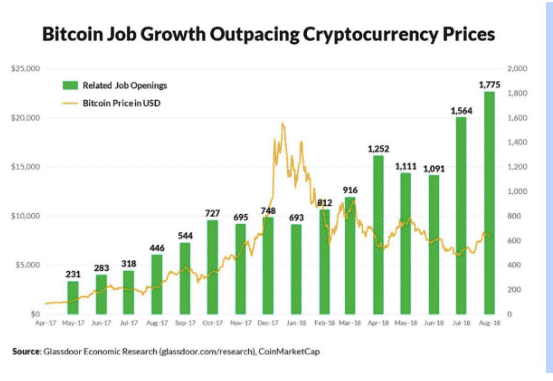 The report notes, “Blockchain technologies and cryptocurrencies have surged in popularity in the last year, evolving from a niche technological curiosity into an explosive financial market worth hundreds of billions of dollars. Bitcoin and other cryptocurrencies have quickly gained wider appeal from amateur enthusiasts, venture capitalists and major corporations hoping to capitalize on the technology and assets’ growth.”

In the US, New York City and San Francisco have the highest concentration of these jobs along with a presence in San Jose, Chicago, and Seattle. At the world level, with 16 percent share, London ranks the best among the top international metros for blockchain job openings on Glassdoor. It is followed by Singapore, Toronto, Hong Kong, and Berlin.

“There’s a ton of demand for blockchain. Software engineers are in very short supply, but this is even more acute and that’s why salaries are even higher.”

The data further reveals that Bitcoin and blockchain jobs pay well above the median US salary as well as it reports, “the median salary for blockchain-related job openings is $84,884 per year. This is $32,423 or 61.8 percent over the US median salary of $52,461, according to Glassdoor’s August 2018.”

Not long ago, CNN reported that the salary of blockchain engineers is rising at a large scale, coming at part with the AI experts’ salary.

“There’s a mindset here of taking a long-term view of planning. If you’re going to build blockchain technology, you have to get that talent.”

Glassdoor included its research with, “While the ultimate staying power of cryptocurrencies and blockchain technologies remains to be seen, the blockchain job market seems primed to continue its rapid growth into the near future.”

These data only solidify the fact that the awareness, attraction, and demand for experts in blockchain and crypto field is only increasing as people anticipates and predicts a bright future.

Stan Peterson
768 Articles
Being an active participant in the Blockchain world, I always look forward to engage with opportunities where I could share my love towards digital transformation.
advertisement