The Cardano network has been gearing up for the release of the Shelley hard fork. The platform had even revealed a rollout plan for the same. Earlier today, IOHK released the hard fork combinator which will reportedly smoothen the network’s transition into the Shelley era.

Is Cardano’s Shelley Roll Out Plan On Track?

The Cardano network made news earlier this month as it recorded massive volumes. The network’s social volume wasn’t far behind as it was constantly breaking previously made records. Several in the community have been speculating that Shelley could have fueled this growth. Earlier this month, the network released the “Cardano Shelley Rollout Plan” highlighting the agenda for the network’s transition into the Shelley era. 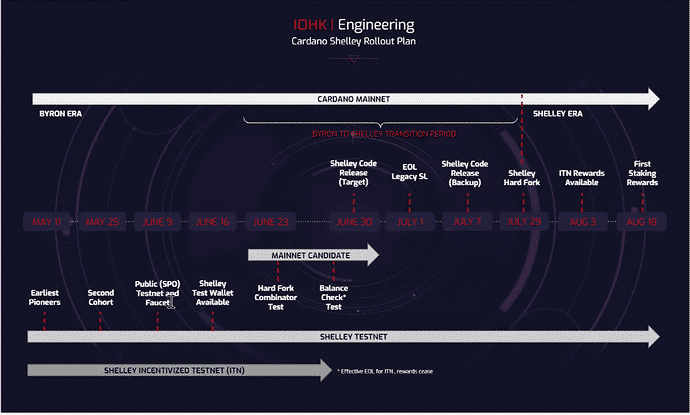 While the Shelley hard fork is scheduled for 29 July 2020, other updates that have been prepping the network for this transition that is underway. In light of the same, the IOHK team announced the latest update. In a blog post, IOHK’s Tim Harrison revealed that the Hard fork Combinator was ready for Shelley deployment.

In the post, Harrison pointed out that the hard fork combinator was an essential milestone for the deployment of Shelley. The Cardano network which currently in the Byron era will traverse into the Shelley era in an “orderly manner”, due to the combination. Apart from this, the hard fork combinator actually dodges the hard fork and could even be called the “hard fork preventer.” A lot of times, hard forks fail or take longer than usual or even generate distinct versions of the protocol in case of a conflict of interest between the entities running nodes.

“The hard fork combinator gives us the capability for a node to speak multiple protocols (though only one at once!). While running the first protocol (i.e. Byron), it can be triggered by a special on-chain update whereupon it manages the smooth transition to running the next protocol (i.e. Shelley).”

While this update was supposed to take place on 23 June 2020, it was deemed successful almost six days post the actual date. The Cardano community has been in anticipation for quite a long time, the latest delay could put the Shelley hardfork roll out days behind the scheduled date.