Sequoia Capital, one of the world’s largest venture capital firms is reportedly looking to move into crypto. The first major hint came in the form of its Twitter bio change where it removed “company” from its bio and added “DAO.” The addition of DAO to their bio filed much speculation and defi proponents even claimed it to be a hint towards a possible move to decentralized governance.

DAO or Decentralized Autonomous Organization is a system created by developers for decentralized decision making. They are not controlled by a single institution like a government or central bank but instead are divided among a variety of computers, networks, and nodes.  Defi protocols often incorporate DAO to attain a certain level of privacy and security. 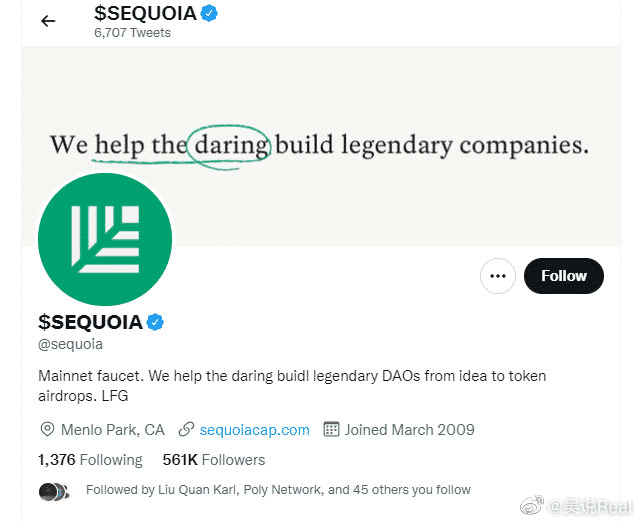 Popular Chinese insider Twitter handles Wu Blockchain also reported that the head of Sequoia China has recently said, “all in crypto” on the social media platform WeChat. It is not yet confirmed whether the head of the company made those comments on a personal basis or from a company’s point of view.

Sequoia Capital, one of the world's largest venture capital, replaced the "company" in the Twitter profile with DAO. Shen Nanpeng, head of Sequoia China, said in the WeChat community: all in crypto. pic.twitter.com/1vHV8Yhr5i

The growing interest of mainstream firms in crypto is nothing new, but the fact that a top venture capital firm of Sequoia’s stature is hinting at a possible move to decentralized governance would be a piece of massive news if true.

Many were baffled by the change on the internet and many others called it just another Twitter gimmick. One user wrote Sequoia China is quite different from Sequoia

El Salvador became the first nation to make Bitcoin (BTC) a legal tender while Miami city has developed its own coin called Miami coin on top of the Bitcoin network.