Bitcoin price is maintaining the greens for 5 days in a row and managing to trade above $7,400 level. In the meantime, the majority of the crypto market is experiencing substantial losses. However, the continuous upward momentum has Bitcoin Dominance rising to 45.1 percent level, registering the increase of 13 percent from its all-time lowest about 32% in January.

It has been 5 days since Bitcoin has been continuously on the rise. This has been a pretty spectacular week for bitcoin. At the time of writing, Bitcoin has been riding at $7,464 with a market cap of $128 billion and $4.8 billion trading volume.

On June 15, the Bitcoin price started its upward trend from $6,250. This further went to $6,600 on July 16. The highest increase in bitcoin price registered on July 17, when it spiked from $6,700 to over $7,300 level. On this day, the entire crypto market has been experiencing substantial gains and the overall market cap reached $25 billion.

In the subsequent days, though the rise in price hasn’t been more than 1 to 2 percent, it remained stable and above the $7,400 mark.

Since the beginning of this year, Bitcoin dominance has been pretty low as it went from 65 percent in early December to 32 percent in the mid-January. This has been the all-time low of Bitcoin Dominance as other cryptocurrencies flourished in the market.

However, as the Bitcoin price kept a continuous upward movement despite the red in the market, the BTC dominance has yet again risen to 45.1%. There has been an increase of 13 percent in BTC dominance from the January’s lowest. 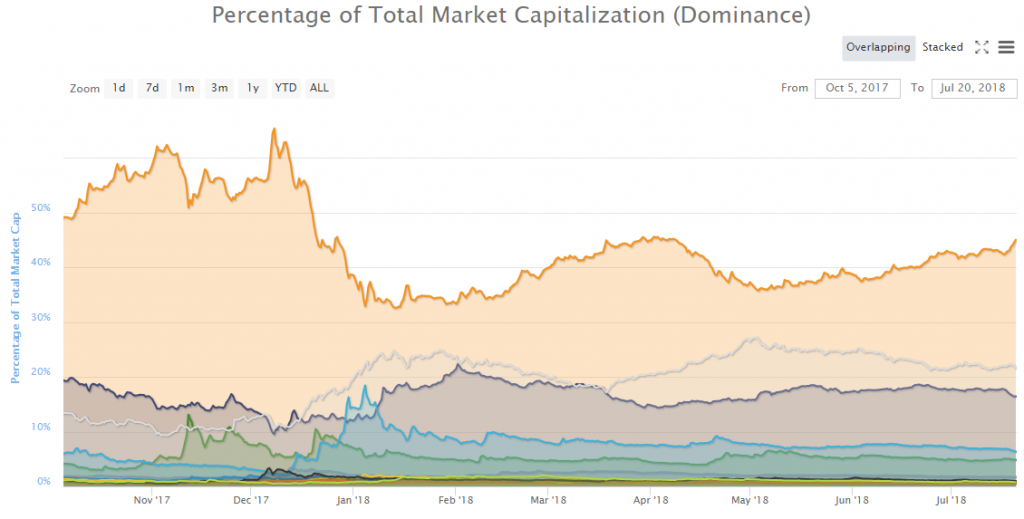 Though there is no surety if Bitcoin will maintain the greens, experts like BitMEX CEO and others believe Bitcoin price might raise close to $10k but is likely to test its lowest at $5k before it skyrockets and hit the predicted $50k, $60k or a higher level.

Experts are bullish that Bitcoin will hit a new high this year, however, if the stalled bulls, for now, are going to continue or take a step back is yet to be known.

The Beatles’ Star Announces NFT Collection
Facebook Twitter LinkedIn Xing
Sagar Saxena
119 Articles
Passionate about Blockchain and has been researching and writing about the Blockchain technology for over a year now. Also holds expertise in digital marketing. follow me on twitter at @sagar2803 or reach out to him at sagar[at]coingape.com