Therefore, the break above $52,000 is a big step for Bitcoin bulls because it allows them to expand their scope above $60,000. Note that Bitcoin is trading above an ascending triangle, which is a massively bullish signal.

An ascending triangle is a technical bullish continuation pattern. It has to meet certain conditions; a trendline connecting a series of higher lows and a horizontal line (x-axis) linking the peaks. The pattern shows that bulls are getting stronger as the price forms a higher low pattern.

A breakout is usually anticipated at the x-axis and results in a rapid upswing. Note that for an ascending triangle to form, the market must generally be in an uptrend. At the same time, the pattern will start to take shape as the market consolidates.

As the price rises progressively, buyers intensify their grip, and sellers lose traction, leading to a breakout equal to the distance between the highest and lowest triangle points.

Meanwhile, Bitcoin has already finished the first step of the technical breakout. On the upside, the triangle has a 16% target of $60,860. The bullish outlook has been validated by the Moving Average Convergence Divergence (MACD). 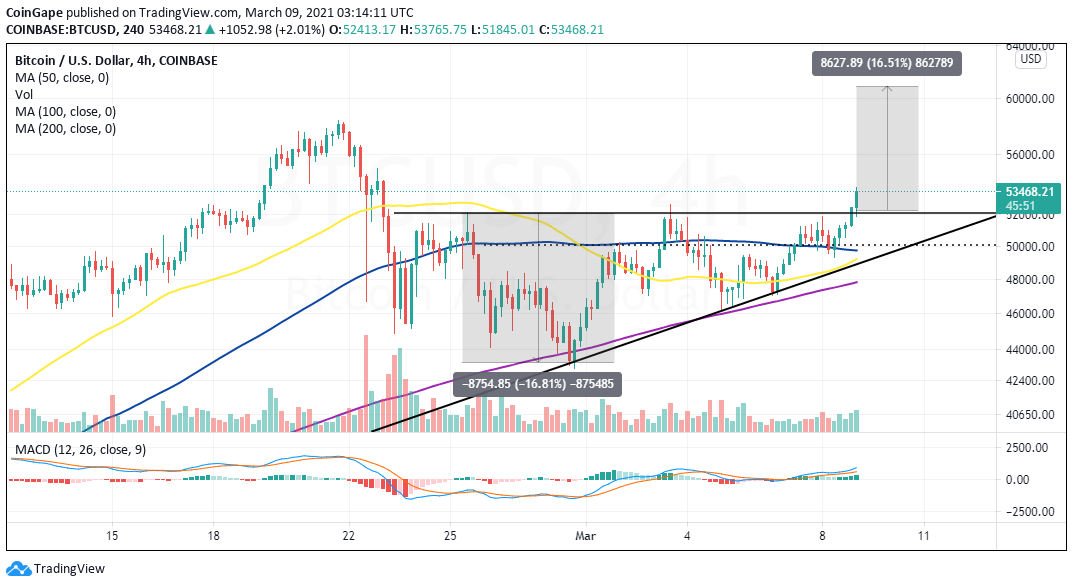 If the next short-term hurdle at $54,000 fails to hold, we will likely see the uptrend to highs above $60,000 delayed. On the downside, the triangle’s x-axis is likely to provide initial support. Holding above $50,000 is to BTC, but buyers will seek refuge at the 100 SMA if push comes to shove.