Bancor has announced that it has experienced a security breach and is currently under maintenance while investigating the matter. The details aren’t revealed yet, though the prices have taken a nosedive as they plummet 20 percent.

The blockchain protocol Bancor, took to Twitter to announce that it experienced a security breach and is investigating the reasons. Currently undergoing maintenance, they will share a detailed report later.

This morning (CEST) Bancor experienced a security breach. No user wallets were compromised. To complete the investigation, we have moved to maintenance and will be releasing a more detailed report shortly. We look forward to being back online as soon as possible.

Before posting about the security breach, the team intimated the community of its Web App going under maintenance.

Bancor Web App is currently down for maintenance.

In response to the security breach, a Redditor shared,

The website also has under maintenance sign while reminding the users that their funds are safe as Bancor doesn’t hold users’ assets. Bancor protocol basically allows users to convert different tokens directly instead of exchanging them on the exchanges. The smart contracts that create smart tokens work as an alternative mechanism for trading. The token conversions take place internally as the reserves of ERC20 tokens are held within their smart contract.

Moreover, it provides liquidity by removing the buyers and sellers as one can directly make the conversion at any time via smart contracts on its network.

In June, Bancor completed its one year and in last month itself, it launched a community network to combat poverty. As for the upcoming events, Bancor co-founder, Eyal Hertzog will be speaking at Hack Summit, scheduled from 9 to 11 July.

Excited to have Eyal Hertzog (@eyal), co-founder of @Bancor #BNT, join us at #hacksummit2018! Register to learn about #blockchain for FREE: https://t.co/gbxxdwCkhc pic.twitter.com/hKqHHh8pCH

At the time of writing, Bancor (BNT) has been trading at $2.54 while being down by 20.78 percent in the past 24 hours. BNT is also running red in the BTC and ETH market by approximately 20 percent against both.

If we take a look at today’s price chart of Bancor, it took a serious dip. Opening the day at $3.17, it has come to close to reaching below even $2.57 price level. 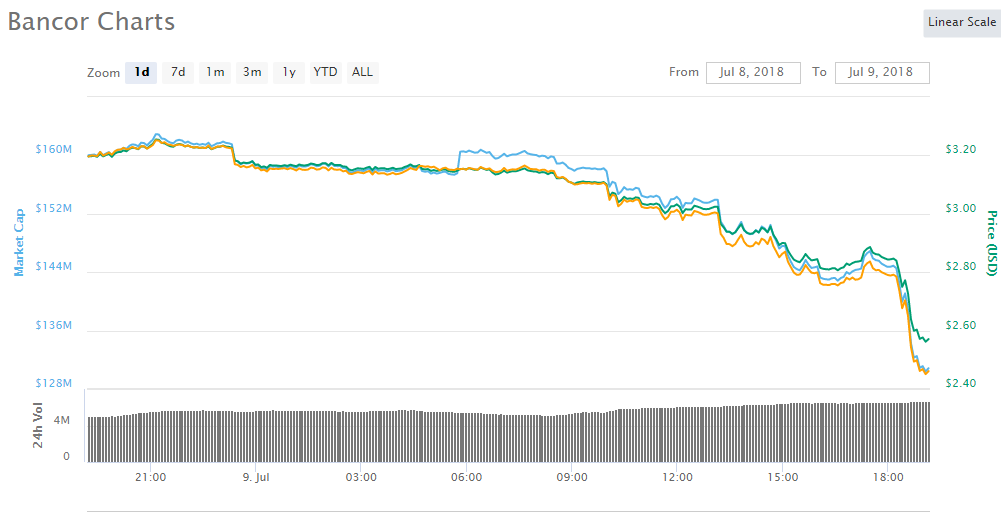 Though in the past 7-days the price has been somewhat of on a rollercoaster ride, Bancor has been on a constant downward momentum the entire month while experiencing upward swings intermittently. BNT price has fallen down from $4.08 a month back.

According to Coinmarketcap, Bancor (BNT) is positioned at 77th place. The highest trading of Bancor takes place at HitBTC exchange, followed by Bit Forex, Bancor Network and Binance against BTC and USDT pairs. With a market cap of over $129 million, it is managing the daily trading volume of $6.8 million.

The news of security breach could be a reason for the drastic fall, however, Bancor will be revealing about the entire situation shortly that will give a better insight into what exactly went down.

Guaranty Escrow to Accept Dogecoin Payment For Real Estate Purchases
Guaranty Escrow, a real estate service provider that accepts crypto…
Anjali Tyagi 440 Articles
Having a background in writing, I worked on a wide array of industry topics and have recently entered the world of Blockchain and Cryptocurrency.
Follow Anjali @