The bitcoin options market is on a sustained growth rate since the start of April as the market finally recovers from the horrors of “Black Thursday” when BTC stooped to $3,800. Since the start of April, the BTC options open interest has grown by 50% to $600 million (without Binance) signaling hope for the cryptocurrency market heading to the halving.

Additionally, the Binance exchange reported $1 billion in BTC option trading volume on the exchange since its inception earlier in the year. Despite the growing funds in BTC’s options market, the institutional investment ratios and declining volumes give a grim view of the short term future of BTC’s price.

Technical indicators on Bitcoin’s derivative markets may give BTC perma bulls some hope going into the final days before May’s halving. According to Skew Markets, a crypto data aggregator, the BTC options market is witnessing a surge in the funds deposited – growing 49% in April alone since hitting a low of $400 million on Mar. 29.

Deribit remains the top exchange according to the data, with a total of $521 million worth of BTC options in the open market. This represents a 47.5% boost in April giving a very bullish signal on BTC’s price in the long term. OKEx and Ledger X hold the second and third largest share of open contracts in the BTCs option market with a total of $37 million and $34 million respectively. 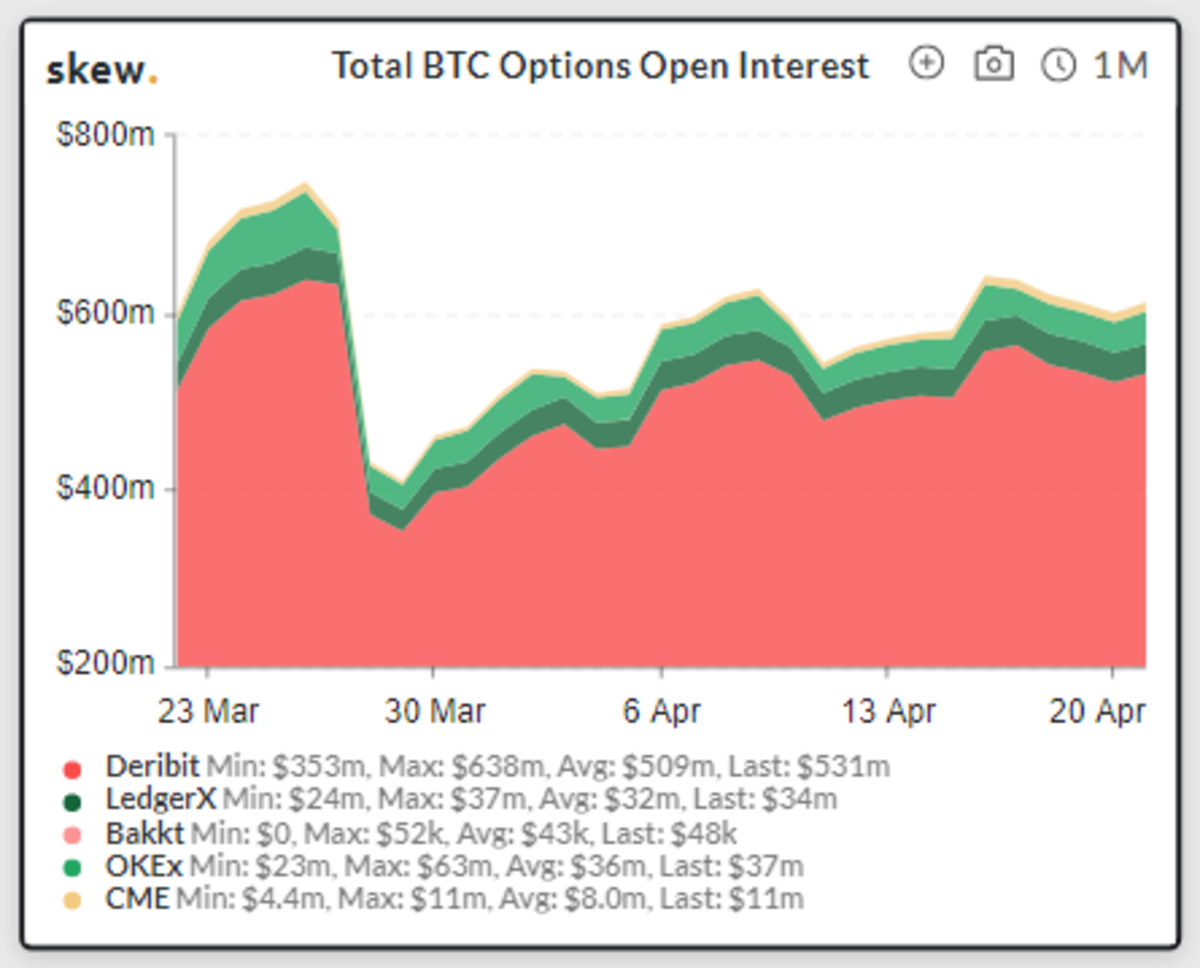 Despite the rocketing heights in OI, the total value of BTC options contracts represents an 8% dip in the past month. Additionally, the BTC options OI is 17% lower since hitting monthly highs of $749 million on Mar 26.

Moreover, Bitcoin options trading volumes remain low giving mixed signals on the possible movement of BTC/USD in the near term.

The spike in open interest offers some hope on BTC/USD pair breaching the ever-evading $8,000 mark. However, looking at the spot and option volumes charts, the market looks bearish to say the least. Since spiking to $80 million in daily volumes on April 16, the volumes have dropped significantly to around $30 million, showing low participation by investors in the market. 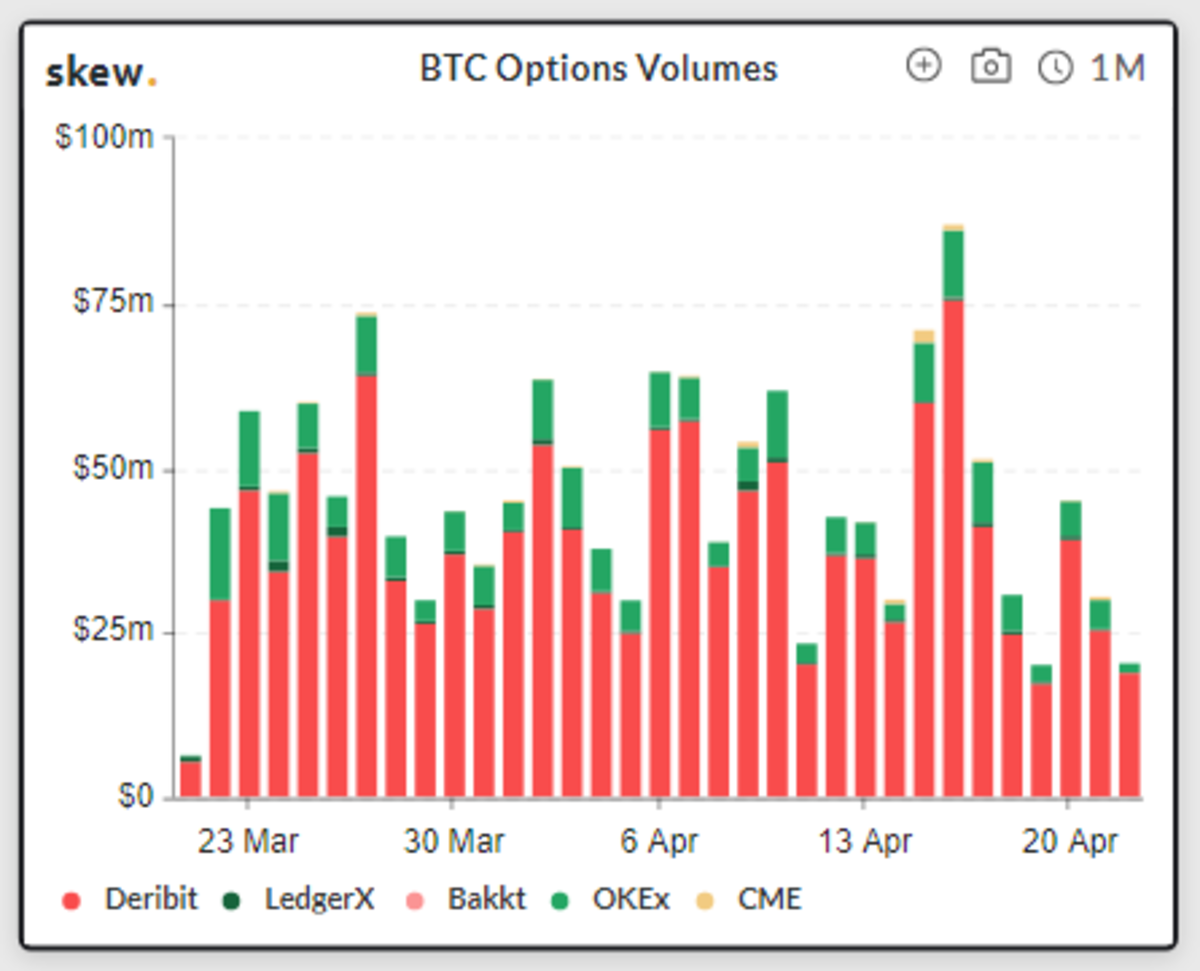 Notwithstanding, Bitcoin currently changes hands at $6,850, dipping slightly below the daily 50-day moving average resistance – supporting the bearish sentiments on the market. Crypto trader and analyst Crypto Michael believes $7,000 will be key to keep the price of BTC afloat to distract from a scary bearish move on the market.

Still going according to plan.

Weak volume on the breakout as well, which makes me cautious on any longs. pic.twitter.com/lcYRBeLbhe

One exchange however that is taking over the Bitcoin derivatives space is Binance, the world’s largest cryptocurrency exchange. The exchange recently announced that its recently launched Bitcoin options have already traded over $1 billion in volume since inception on Apr. 12.

advertisement
✓ Share:
Disclaimer
The presented content may include the personal opinion of the author and is subject to market condition. Do your market research before investing in cryptocurrencies. The author or the publication does not hold any responsibility for your personal financial loss.
About Author
Divya Bhatia
Divya Bhatia from Computer science background is a full-time content writer at Coingape. Her passion lies in writing and delivering apt information to users. Currently, she does not hold any form of cryptocurrencies. Reach out to her at [email protected]

As BTC Surges Past $48,000, Are Bitcoin Whales Playing Pump and Dump?
Handpicked Stories

As BTC Surges Past $48,000, Are Bitcoin Whales Playing Pump and Dump?
Retail investors need to beware as Bitcoin’s millionaire-tier whale addresses might be playing around with them! As per…
Divya Bhatia 28 Articles
Divya Bhatia from Computer science background is a full-time content writer at Coingape. Her passion lies in writing and delivering apt information to users. Currently, she does not hold any form of cryptocurrencies. Reach out to her at [email protected]