The cryptocurrency market is back to its bullish trends as Bitcoin’s price breached the psychological resistance at $10,000 USD once again pushing up the alt market along with it. While the whole market is performing rather well, there are two major altcoins that offer a more exciting prospect in the current uptrend – Tezos (XTZ) and Chainlink (LINK) – who’ve witnessed a 7% and 5% increase in the past 24 hours respectively.

The tenth placed and fifteenth placed tokens have grown exponentially through 2020, with XTZ holding out 180% returns and LINK gaining 150% since the turn of the decade. Despite offering two completely different solutions, the blockchains are still in fierce competition with each other with the 10th place up for grabs.

Last week ended on a high for both XTZ holders and users as the staking token hit an all-time high of $3.60 on Kraken exchange. However, the buying pressure eased off on the weekend as bulls consolidated their gains in preparation of a possible spike further to new highs.

XTZ currently trades at $3.51 USD, a short reversal from all-time high prices, with the price setting a bullish projection on the daily charts. This represents a spike from an intraday low of $3.08 USD on Tuesday – a sharp 14% rise. Tezos hold on to the tenth positions according to Messari FX data, with a total reported market capitalization of $2.3 billion USD. 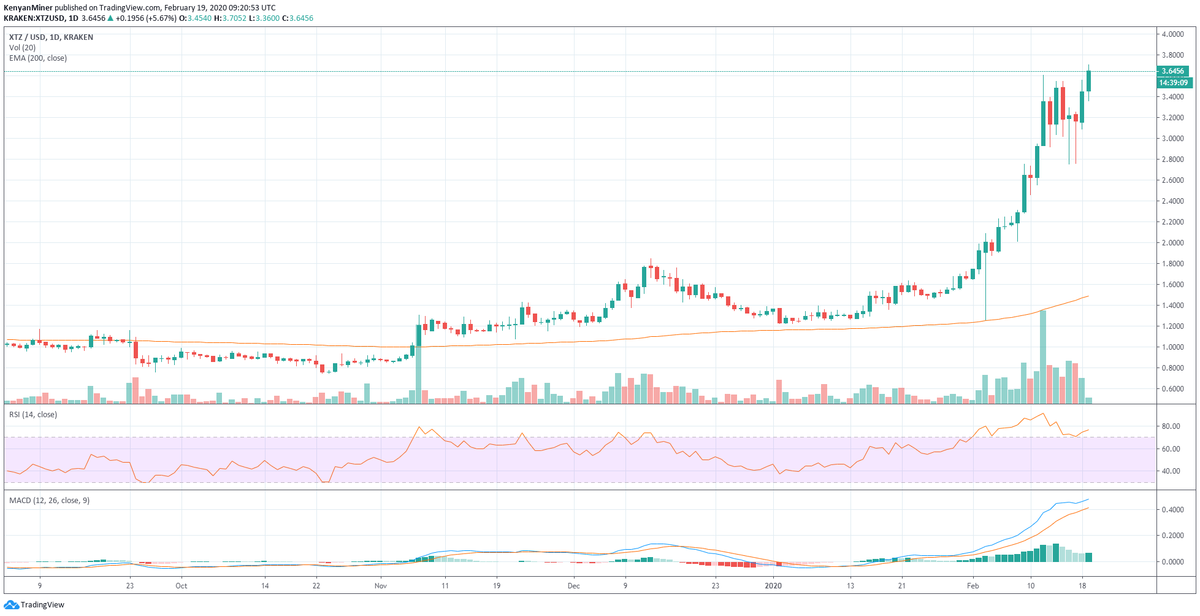 While there are four tokens (Cardano, Tron, Stellar and Monero) separating the staking platform and the decentralized oracle, LINK shows potential of being the digital asset to replace XTZ on the top 10 charts.

It's got a long way to go to catch Tezos, but it's not impossible for $link to enter the Top 10. And, it should absolutely be a Top 10.

Why Chainlink is set to win battle to 10th

A close battle ensues between the five crypto assets targeting on entering 10th on the market cap listings. Of the five however, Chainlink looks the most viable candidate to win the battle to tenth as the blockchain’s utility and adoption continues to grow. Here are two reasons why LINK will sneak into the top 10 in the coming months.

Apart from XTZ and BSV, LINK is the only coin to engulf its previous ATH this year hitting an unprecedented $4.90 USD on Feb. 16. Looking at the daily charts, the MACD is expanding in a bullish momentum signaling a continuation of the trend. Furthermore, LINKUSD’s Elliot Wave Oscillator is deeply green signaling a buying interest in the market.

Notwithstanding, the fundamentals and utility of LINK potentially offers a catalyst to par $5.00 USD levels in coming days.

Following a widely publicized contract breach on bZx exchange, which saw the company lose over $100 million, the company has released a post mortem confirming they will be leveraging the Chainlink oracle system to get quote prices on their assets to prevent another breach. The team wrote,

“We will also be implementing Chainlink oracles as a supplement to the Kyber price feed to provide time-weighted information on price data. Even though this was not an oracle attack, there were many that expressed concern that the security properties of our oracle could be more robust, and we have listened to the feedback.”

Chainlink is offering a real solution in the field of blockchain trusted decentralized oracles which further strengthens its bullish view. You can’t count LINK’s possible move towards the top ten positions.