The first North American ETF launched by Purpose Group reached another milestone within a week of its public launch as it accumulated over 10,000 Bitcoin from the market until now. The total AUM of the ETF reached over $500 million before a sharp Bitcoin price correction. 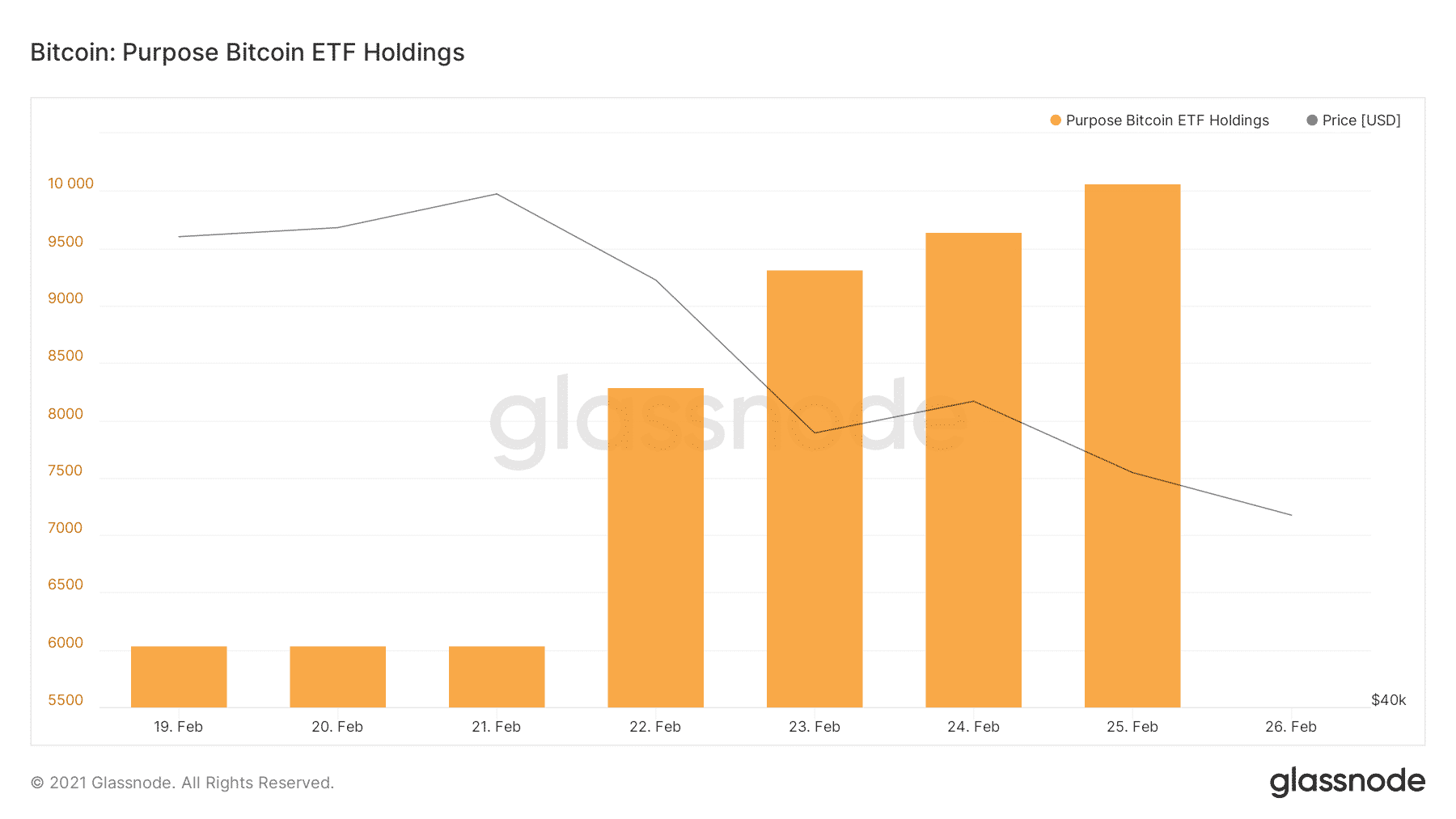 Purpose ETF was launched on February 18 with a lot of hype, being the first North American Bitcoin ETF and it lived up to the hype with over $180 million worth of contracts traded on the first day. Bitcoin price started to decline since its launch, however, it seems the institutions are buying more shares with each price dip as the total holding of the Purpose BTC ETF breached 10,000 figures.

The fall in the price of Bitcoin not only saw Purpose Bitcoin ETF reach a new milestone, but it also saw Grayscale’s GBTC Trust Premium also closed at a discount. The US Securities and Exchange Commission has rejected all Bitcoin ETF applications until now so in absence of any regulated Bitcoin institutional product, Bitcoin trust founded by private firms has become the go-to option. The Trust Fund issues shares leveraged against Bitcoin.

GBTC secondary closed at a discount to NAV pic.twitter.com/R792RQi5M1

The sharp decline in Bitcoin price this week after reaching a new all-time high of $58,543 does not seem to have created any panic among institutions as not only Purpose Bitcoin ETF recorded a new milestone of 10,0000 Bitcoin holdings, nearly 13,000 bitcoin also moved out of Coinbase yesterday to different custodial wallets suggesting institutions were moving their bitcoin away from exchanges in hope of another price rally.

Another significant Coinbase outflows at 48k. US institutional investors are still buying $BTC.

I think the major reason for this drop is the jittering macro environment like the 10-year Treasury note, not whale deposits, miner selling, and lack of institutional demand. https://t.co/wzwkwMhJWx pic.twitter.com/1uEEF8SX5Q

Bitcoin fell to a daily low of $44,454 today with $44,000 being the critical support, however, the price started to show signs of recovery as it rose back above $46,000 at the time of writing. The top cryptocurrency showed similar price behavior even last month when it rose to a new all-time high above $42,000 before falling to a monthly low of $28,757. The price remained under $33k for the most part of January before registering another ATH in the second week of February of over $58,000.

Going by January’s price action, BTC seems to be in consolidation mode and might break into a new bullish rally towards the end of this month or the start of the new month.